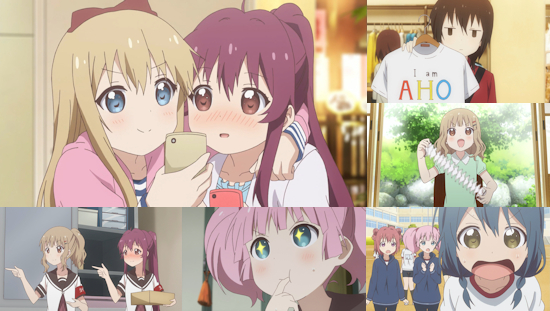 Take a look over my various reviews for YuruYuri thus far, and you'll see an interesting upward trajectory as this comedy series won me over - initially, I spoke of it as a series that "doesn't succeed in being laugh out loud funny", but by the end of its second season I found myself watching a show that "offers up some well-constructed comedy". Can that upward trend continue into a third season of middle school slice of life shenanigans?

In a word - yes. In spite of switching production studio and most of its core staff as Dogakobo made way for TYO Animations, YuruYuri's third series manages to capture all of the improvements that came from its second season and actually manages to build further upon them into the bargain.

Most importantly, this series learns and learns well from its direct predecessor when it comes to how it treats its cast of characters - yes, they all have their distinctive traits and foibles, but they're rarely if ever over-used, which in turn actually leads to something of a sea change in the nature of the relationships between cast members. One of my issues with early episodes of YuruYuri was the "nasty streak" it would sometimes exhibit, where one character's antagonism towards another would transcend feeling playful and start to seem downright mean, but this has vanished entirely by this third season and the show is all the better for it - characters clash and tease one another, but it always feels like the kind of ribbing that comes from a comfortable, genuine friendship rather than anything adversarial.

This in turn helps significantly in bolstering the feel of the relationships between characters, some of which are grown markedly throughout the course of this series - pairings which previously felt like they were a stretch in terms of believable friendships (or beyond) suddenly feel more grounded, and there are actually some really sweet moments that cement some of those core relationships in surprisingly touching ways. Not that YuruYuri is obsessed with those friendships to the exclusion of everything else - this third season sees the show turn into a great ensemble comedy that makes full use of its cast by frequently lumping them all into a single location together to maximise their potential for laughs as a group, or experiments with skits that put characters who don't normally interact with one another on any real level in a room together to see what happens. This pays huge dividends at times when it pairs up two characters who shouldn't fit together well in terms of traditional comedy but makes it work somehow - witness Sakurako and Akari hanging out, or the forcing together of Ayano and Yui to see strong examples of how unusual matches work wonders.

All of this brings us to our most important point about this season of YuruYuri. It's funny to a laugh out loud extent, and consistently so. Admittedly many of its jokes will fall flat if you aren't already well-versed in the show's cast, but assuming you have that prior knowledge from previous series this feels like a comedy at its peak, finding all manner of humorous scenarios to place members of the cast into and leveraging those scenarios to their fullest extent. Of course, not every sketch gets it right and there are some barren spots, but the overall consistency of the show's comedy is very high indeed and every episode is a joy to watch in its own particular way even if you have to wait a while for the moments that press your particular buttons. Even beyond pure laughs, the show occasionally breaks out and tries something different, most notable in one sketch which is presented without any dialogue - no, not mistakenly like a recent FUNimation Entertainment simulcast episode in the US, but as a deliberate affair with only music used to tell the story alongside the visuals to make for a fun change from the norm.

Despite its change of studio, there's no notable drop or change in animation quality or production values for this third season - indeed, the final episode flashes back to the very start of the first series, and if anything it serves as a reminder that this latest iteration of the series looks a little sharper and tidier than its predecessors. The voice cast also remain present and correct and seem to be having a fun time working on the show, which also transfers through to the viewer as a result. Let us not speak of the show's abominable opening and ending themes though - hearing them once is one time too many to our ears.

This series of YuruYuri isn't a good jumping on point for newcomers unfortunately - you'll have to watch from the very start to really appreciate everything season three brings to the table - but for long-standing viewers of this show what we have here is arguably the culmination of a long journey of experimentation and discovery that has finally led to its finding a comedy formula that works terrifically. There's nothing ground-breaking about it and it still won't suit all tastes, but YuruYuri's transition from a series that "nobody will be talking about in a few months" (as I opined at the end of its first season) into a show that I suspect I'll be sharing my favourite moments of with others is a commendable one.

You can watch YuruYuri in streaming form on Crunchyroll.

8
This third series of YuruYuri takes its characters and uses them adroitly to craft a consistently funny comedy.
COMMENT AND DISCUSS
blog comments powered by Disqus