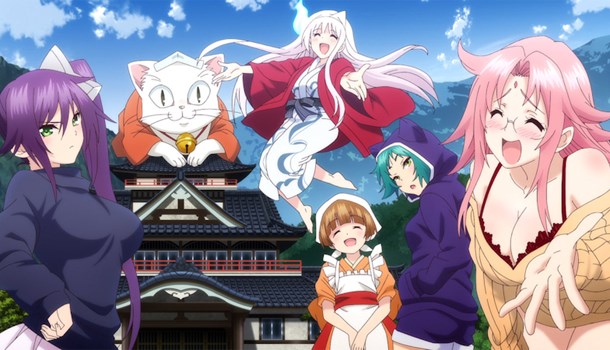 Kogarashi Fuyuzora, A high school student who happens to possess psychic and spiritual powers decides to live at the Yuragi Inn. A former hot spring hotel that is now a cheap boarding house, it's mostly avoided thanks to a reputation for being haunted. Kogarashi takes this opportunity to not only find a cheap place to live, but to also exorcise the ghost from the inn. However he finds himself unable to do so, as the ghost in question is the spirit of a cute and friendly girl called Yuuna, who does not have any memories of previous life. Thus a friendship/relationship starts to form between Kogarashi and Yuuna, where he tries to learn more about her in order to discover what lingering regret binds her to the inn and prevents her from moving on into the afterlife.

The first thing to mention about Yuuna and the Haunted hot springs, in order to get this out of the way, is that the show is rife with fan service. Fan service in the form of nudity, ecchi harem hijinks and every tired accidental pervert trope you could possibly think of. Every episode is filled with nudity, comical sexual situations and so many harem cliches that the series has a straight up 18 rating. It toes the line ever so carefully with what it can get away with. Almost all of the humour arises from seeing members of the female cast naked, Kogarashi getting injured from Yuuna being embarrassed being seen naked, or as his punishment at the hands of the other female residents of the inn for items one and two frankly gets pretty tired and rote rather quickly.

This ecchi approach makes the show feel like it was made in the mid 2000's when harem comedies were more prevalent. It reminded me of properties like Love Hina and Girls Bravo, in which one male character lives with numerous stereotyped females; the cute ditzy girl, the girl who likes to drink and doesn't respect personal space, the normal school girl friend, the one who doesn't talk much, the one who acts stand-offish but secretly yearns to be cute and later on even throws in the one who isn't interested in love but just wants the main character to father their child. Its really bizarre seeing a show like this being made in 2018 and weirder still that the manga started in 2016.

Outside of harem comedy, the show deals with supernatural creatures; mainly ghosts and various demons from Japanese folklore. The main character is a spirit medium who, along with another character, goes on a few missions battling monsters. This only happens a few times and is used as an opportunity for characters to lose their clothes, create comedic hi-jinx or just show how powerful the main character is. These missions only take up about  2 or 3 episodes of the overall show, which makes them feel out of place since the series prioritises nudity over everything else. The main point of the show is for Kogarashi to discover more about Yuuna and find out how to grant her regrets so she can go to heaven, but this aspect is only explored in the introduction episode, the ending and once or twice in between. It feel as though the show forgot about the central conceit once it started getting the characters naked.

On he more positive side, the characters do have their charm despite being somewhat one-dimensional. The show tries to develop at least three of the female characters beyond comedic foils, and the character designs generally are appealing if you're looking for cute girls with big boobs to stare at.

Other than those slight compliments,  there’s really nothing outstanding about this series. It starts with an interesting enough premise that is immediately brushed to the side and only brought up at convenient moments. It doesn't even feel like its interested in it's own plot, instead acting to promote the manga source material and to sell the Blu-Ray, which is uncut and leaves nothing to the imagination.

All this makes the show a difficult one to rate - it has no real value other than providing cute and busty girls to look at, with some occasional comedy and action. Light-hearted fun, with little depth.

Japanese Stereo with English Subtitles; There are no Extras

5
Titillation that is more tepid water than Hot Spring