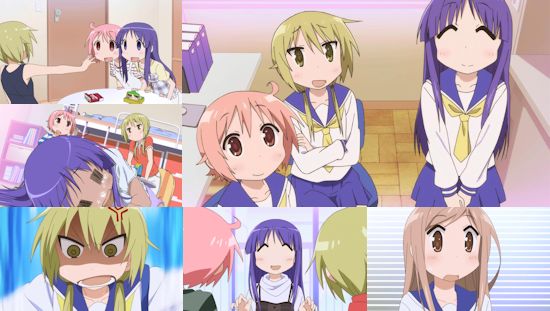 Perhaps the flood of slice of life school comedies is beginning to abate as the success of K-ON becomes nothing but a distant memory in the fast-moving world of the anime industry, but you can still be sure that every new anime season will see at least one example of a bunch of schoolgirls goofing around for our amusement. Enter Yuyushiki, a stablemate of Hidamari Sketch in its original manga form which now makes the jump to the small screen for a slot in this spring's line-up.

Yuyushiki is the tale of three good friends - the serious yet friendly Yui Ichii, larger than life prankster Yuzuko Nonohara, and the ditzy and daft Yukari Hinata. Together, the three of them opt to join their school's Data Processing Club - I have no idea what the ultimate goal of this particular after-school club is supposed to be, but in the hands of these girls it seems to involve spending a lot of time on Wikipedia. Well, we've all had afternoons like that, I'm sure...

It's this discussion of pointless trivia that is Yuyushiki's main hook, giving the girls a reason to think about whales (as one example) in a vaguely grounded way. However, club activities only take up a small slice of a typical episode, with the rest of the time filled with more traditional fare - even here though, there's no shortage of surreal moments or discussions.

Perhaps both the most positive and simultaneously most damning thing I can say about Yuyushiki is that it's "nice" - its characters are fun and you can't help but warm to them, and their group dynamic is well-balanced enough to feel natural, but only rarely does the series to this point infringe upon the realms of "funny". You might find yourself smiling here and there, and maybe even tittering occasionally, but there are no belly laughs to be found here and at times certain jokes feel like they're either overly elongated or simply trying too hard, something which I like to controversially refer to as "the Nichijou effect".

Visually, Yuyushiki isn't the kind of series to immediately grab you, but its style and character designs are such that you'll quickly warm to them, and they fit in with the series nicely. The voice cast also works well in fitting in with the characters and bringing a sense of fun to proceedings without going too far over the top and ruining the whole thing.

If you're a big fan of the slice of life genre, then Yuyushiki might just do enough to keep you keen - its paced and pitched well enough to avoid becoming repetitive or irritating even it isn't blazing new trails in terms of its comedy. As a forgettable way to pass the time while the series streams it's certainly an inoffensive and mildly fun little show, but it won't live long in the memory beyond... wait, what was I talking about again?

You can currently watch Yuyushiki in streaming form on Crunchyroll.

6
A nice little slice of life show - not particularly funny, but a relaxing way to while away some time.
COMMENT AND DISCUSS
blog comments powered by Disqus