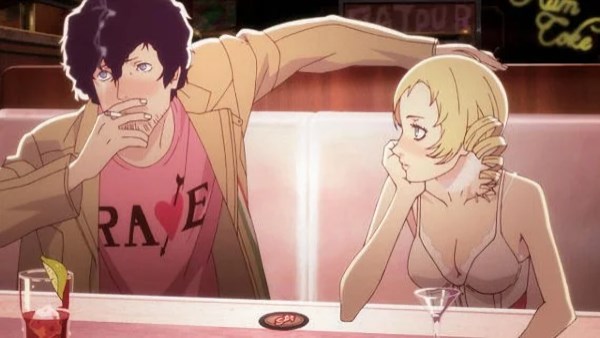 I’ve heard Catherine described as a good anime with an OK puzzle game bolted on. Personally though I feel that this sells it short on both levels – Catherine is an amazing anime with a hair-pullingly frustrating puzzle game attached.

For those of you who don’t know, Catherine is the latest game from Atlus and the team that make the Persona games. It follows the cautionary tale of Vincent who, after getting some strong hints that his girlfriend Katherine wants to get married, embarks on a drunken affair with a young blonde named Catherine who starts to make his life considerably more complicated.

The main story is every bit as good as you’d expect from the Persona team with a great bunch of characters and brilliant twists and turns at every corner - as a result, it's definitely worth playing the game to see through to the 8 or so different endings that are available.

In addition to this, all the cut-scenes switch regularly between some very nice cel-shaded graphics and some great full-on animation from Studio 4°C which really sells the story and characters in a way that tends to be rare in a lot of games.

On the other side of the coin however, you can’t ignore the fact that this is... well... a game, and the actual game side of Catherine is not quite up to scratch. It takes the form of a block puzzle where Vincent must move blocks to create a staircase up to the top of each level to try and escape a horrible recurring nightmare.

Visually this aspect of the game, whilst a little samey, is still pretty good and is broken up with several inventively designed bosses and areas where you can interact with other nightmare travellers whom you see as sheep. These areas are also where you’ll get a lot of work put into the games moral choice system which determines the endings.

On a playable level however things aren’t so good. The difficulty follows not so much a curve but resembles a heart monitor graph trying to depict a mountain range. When you enhance the difficulty of working out the layouts with an unforgiving timer, boss encounters and later on in the game something which I won’t spoil but made the game so difficult I was almost screaming in frustration, it becomes nightmarish at times even on the lower difficulty settings.

Overall it’s difficult to recommend Catherine because of the gameplay alone, but at the same time its something that certainly all anime fans at the very least should  want to see through as it provides something that you rarely see – a mature, adult anime (which is also one of the best stories I’ve seen in either a game or anime in years). In fact, if any game ever has deserved to have a full-on anime or at least a film made of it, it’s Catherine.

7
Frustratingly difficult game play sandwiching a story that makes it all worthwhile.