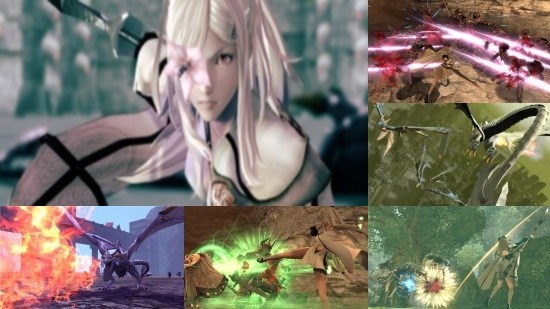 Set in a world governed by a group of Goddesses known as the “Intoners”, Drakengard 3 follows the ruthless quest of their annihilation at the hands of the oldest of the Intoners, “Zero”. Along with her Dragon companion Mikhail, Zero sets out to murder her sisters One, Two, Three, Four and Five, thus ending the rule of the intoners and changing the fate of the world in the process.

Drakengard 3 starts out with a very simple premise often found in RPGs, but puts a very unique spin on it. Usually an RPG would have the player assume the role of a protagonist that has a noble goal of defeating the great evil terrorising the land and bringing peace to the world, but Drakengard 3 on the other hand doesn't paint things in such black and white terms, leaving a lot of character actions ambiguous for most of the game. At first glance, Zero appears to be the villain that the player controls due to her fanatical devotion to murdering her sisters. It also doesn't help that Zero is quite the foul-mouthed protagonist. Through the conversations she has with Mikhail and her ever expanding party of characters, it is shown how resolute and determined she is in her goal, going as far as even killing all the followers of her sisters that get in her way, Zero shows that such actions feel natural to her and will constantly complain about the efforts she has to go through in order to track down and encounter her sisters - from this it could be seen that the sister Intoners are helpless victims just defending themselves, if not for how devout and fanatical the game makes their followers. Each of the sisters is treated as a goddess that has fanatical groups protecting them in what can only be described as a religion or cult, with certain parts of the game showing how devout and loyal these follows can get, some of which deals with issues of insanity and withdrawal-like symptoms. Alongside this, the Intoners are also not the wholesome perfect Goddesses their followers believe them to be.

In Drakengard 3 there is a lot of talk about sex, with certain characters embodying one facet of it. The Intoners themselves represent certain attitudes and desires, with one of the Intoners being completely chaste and pure while another is incredibly lustful. This aspect also spills over into the main focal point of the accompanying party members personalities - one character is represented by being a masochist who likes pain while another is a sadist who derives pleasure in hurting others. It would be fine to give these characters these attributes, but the problem with the characters is that their fetishes is all that they talk about. Almost every piece of incidental dialogue during the game discusses the characters fetishes and when they are not discussing sex and fetishes they are talking about their hatred for each other. Having the characters talk this way makes it incredibly hard to have any attachment to them, as there is very little to their personalities other than associated traits that go hand-in-hand with their proclivities. For the most part, the only characters in the game that are given any development are Zero and Mikhail, the latter being a young dragon who has been reincarnated from an older dragon who is still impressionable and idealistic but progresses to become stronger and realise that some matters can't all be settled with just conversation. Zero, while still crass and rude during the entire game, starts to lighten up a bit and shows genuine concern for Mikhail at times throughout the story.

The story itself is broken into chapters and verses. Each verse is a mission that takes place on a map - by following through the story, the game presents the players with multiple endings that build upon each other and carry on. In order to compensate for this, the game presents the follow-up to an ending as a branching path that shows scenes playing out differently from a set point in the story and the resulting effects from this. While an interesting idea, it does result in players having to play through the same environments again but with slightly different circumstances. Thankfully the story changes enough to remain interesting and crazy enough to keep player attention, although the conditions for unlocking the final story section involves a rather tedious affair that only unlocks once the player has every weapon in their inventory.

Weapons can be unlocked through purchasing them from the game's chapter select menu, receiving them as rewards or finding them in chests. There are four weapon categories in the game, each of which is broken up into short, medium and long range. The range and type of weapon determines the moveset, which is broken into standard attacks using the square button and heavy attacks using the triangle button. All triangle button attacks make use of the stamina gauge that refills once emptied.

The gameplay of Drakengard 3 is very similar to Dynasty Warriors - since the game is broken up into missions, each one takes place on a map that is filled with a large amount of enemies. However, the game itself falls into the predictable pattern of having the player travel through a corridor until they reach an area that is closed off until they defeat a set amount of enemies and/or a sub-boss before moving on. There's frequent repetition in the enemy designs, with the same human characters being constantly re-used and the same set of monsters being re-used with different colour schemes as the game progresses. Each mission can last between a minute to an hour depending on how much story is present and how quickly a side mission can be completed, while the environments range from very closed off for the side missions to rather sparse and open environments for the main story missions. The problem with this is that the maps mostly feel rather empty and lack enemies to fill up the location - then again, when there are more characters on-screen than usual this causes havoc with performance, and several times during the game the frame rate drops considerably making the game rather frustrating to play due to inputs not properly being recognised, which in turn also affects the timing on combos. For the most part though, the frame rate stays at a level that is acceptable for the amount of effort that is needed to pull off combos. Doing this in the game is incredibly simple due to mainly relying on the square button, with triangle as the button used to finish combos. Other than that, the player has access to a guard that can be used to parry enemies with the right timing, an evasive dash and the ability to switch between the four equipped weapons from each category on the fly. The player also has access to “Intoner mode”, which uses a special gauge that is filled from killing enemies. Intoner mode grants the player invincibility and quicker attacks when activated via a gauge that doesn't need to be completely full to activate it and can be deactivated before the gauge completely depletes, meaning it can be used rather strategically within combos.

Along with the Dynasty Warriors-esque gameplay, there are also several other gameplay aspects available. This mainly revolves around controlling the dragon Mikhail which turns the game into a shoot 'em up with enemies appearing in waves where multiple targets can be locked on to.  It feels like a very run-of-the-mill shooter that is included simply to have more of an excuse to use the Dragon in combat. When not engaged in these stages, Mikhail is also used in boss battles, which compared to the main game feel rather easy, seeming to suggest the boss battles themselves are there for the spectacle rather than to present a challenge. This is immediately evident, as each boss follows the same predictable pattern where the player needs to dodge until there is an opening, rush in and do as much damage as possible, then repeat this process until you emerge victorious.  During these battles each boss gets their own theme song, which is one of the game's best features - the soundtrack of Drakengard 3 is excellent, containing beautiful pieces of music that really complement the game and its story well.

Gameplay wise Drakengard 3 is rather mediocre - it takes concepts used in other games and doesn't do anything unique with them. This, coupled with its occasional frame rate issues and repetitive gameplay structure, make the game hard to recommend on its mechanics alone. However, the game does boast an incredibly beautiful soundtrack, some really great-looking character designs and a very thought-provoking story that is enough of a draw to get players invested in the game. While the side characters aren't all that great personality-wise and the enemy designs are re-used more often than necessary, the game makes the most of them to deliver a bizarre and unique story that is arguably worth putting up with the game's flaws for.

6
A heavily flawed yet beautiful experience, with a story worth seeing despite it's middling gameplay.