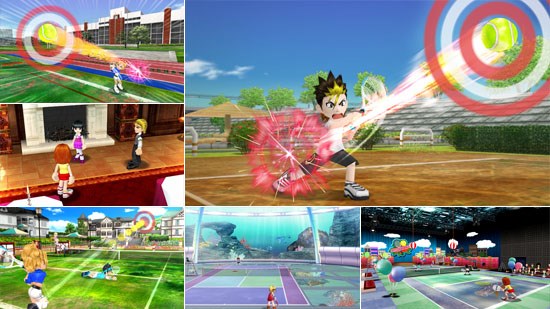 It is the sporting season at the moment and England is once again doing as well as it usually does. So with the last few weeks being football, football, football, how about a change? Well with the Wimbledon season been and gone, now’s the best time to crack out the tennis racket and balls and dive headlong into something that is fun and easy to play but will keep you very addicted.

Surprisingly there is actually a story to this game. You are an aspiring tennis player who is traveling the world to spread the fun of tennis. Hardly the stuff of Oscars and it is odd that everyone does everything based around the game of tennis, even making TV programs and ordering staff around. Still, you aren’t exactly playing this type of game for the storyline, so it really is just a form of progression on the single-player side.

Trust us, you will be spending a lot of time on that single-player side of things. Here you’ll collect characters, costume items, rackets and level up characters to gain new abilities and improve current ones. Yes you do have to progress through a horrid plot that does go on for longer than it really should or need to, but it is a minor grievance. The real star of the show has to be the control system for Everybody’s Tennis. It’s the usual story of being easy to pick up and play, but has a good few levels of advanced techniques that need to be mastered so that you can pull off those smash aces and get that ball on the line. Swings are best on timing, so unlike Virtual Tennis where just swinging will see you hit the ball, here you have to position and hit the ball at the right time to return. It takes a bit of getting used to and will see a few missed sets, but once it clicks you’ll be hitting them home most of the time.

The graphics are another good point; as with the older brother of the series Everybody’s Golf, Tennis features a very cutesy anime style with slightly larger than average heads and a whole range of cute poses and voice overs. You can dress up your character in whatever clothes you manage to collect during the course of the game. These range from normal tennis dresses to frog heads, maid outfits and teddy bear backpacks. Clothes in some cases can also give your character boosts in certain areas, so it’s worth trying out bizarre clothing combinations to see how powerful you can make your character. You can even spend the points you collect in the shop to buy even more stuff for your characters. If you’re a fan of collecting as much as possible, then you are going to enjoy this aspect of the game.

The rest of the game consists of the standard exhibition matches should you want a quick match, as well as the multiplayer option. Unfortunately this is only local multiplayer, so no challenging people online, but on the plus side you can have a friend team up with you in the single-player with co-op. Beyond that, there isn’t much else to do to play with others, it seems most of the game is wrapped up in a solo affair, which is a disappointment.

There are some other negatives about Everybody’s Tennis. It will take a good two hours before you start to feel challenged in single-player. You will easily breeze through early tennis matches once you’ve found your feet with only "boss" characters providing hint of a challenge. Even then you are unlikely not to make it through a match first time. Also the voice acting needs some work, the default female character has an annoying pre-school TV show voice that would be at home with the Teletubbies, while when you win with an Epic Victory (I’m not making that up) you randomly get some shout that is something along the lines of “You go girl”. It’s very random and seems like an attempt to Americanise the game somewhat. The American cheerleader for one needs a slap to make her talk properly and don’t even get me started on the some of the later characters. This is one of the few times I’ve prayed that a Japanese soundtrack is an option, but it seems anime fans will have to settle for the graphics instead.

If you’re not a die-hard tennis fan and you want something that will kill some time on the train then Everybody’s Tennis could fill a hole. It’s fun in short bursts and if you ignore the obvious flaws, then it really isn’t that bad - I’m not a sports game player at all and I managed to get some fun out of it. However, if you are a hater of all things tennis or much prefer your sports to be simulation based, then this is very much not for you. Once it hits the sub-£20 price mark it should be an instant purchase for most PSP owners, until then you need to decide if you’ll get your fill out of it at full price.

7
A family-friendly attempt at the traditional game, just don’t expect much in the way of options.
LATEST REVIEWS