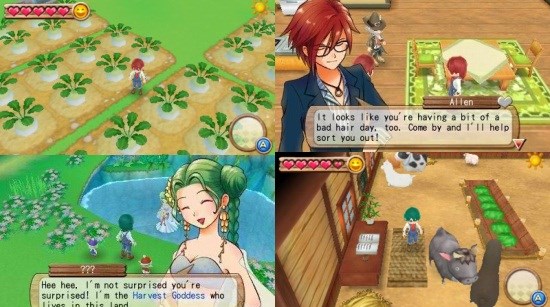 The idea of a farmers life has always held some appeal for me, so when I had the chance to review Harvest Moon A New Beginning right around the time my withdrawal symptoms from the Silver Spoon anime ending were at their highest peak... well, I could hardly turn it down now could I?

This is the 24th game in the incredibly long-running farm sim and it’s actually the first one I’ve ever gotten around to playing so I was pretty excited to give it a whirl and plunged right in. The story is barely there, which gave me mixed feelings right from the offset. You are heading into the rather run-down town to inherit your family’s farm. The end. No, seriously that is pretty much the entirety of the story. There are a variety of characters around with a little back-story and you can even get married if you choose, but it has pretty much no effect on the game whether you actually pursue any of this beyond tossing the odd bunch of flowers at an NPC in the hopes they’ll finally give you the blueprint to make the best axe. Similarly the ‘subplot’ of rebuilding the town to its former glory is pretty much totally optional and mostly serves to give you something to do with all those stones you’ve been picking up. There's there’s no actual ending to the game as such, merely a point after which you’ll no longer be asked to slave around for the townsfolk at which point making cash becomes pretty much the only thing to do. This does make it rather difficult to care about anything that’s going on outside the farm itself, but then again the lead element in a game like this needs to be the resource management so you can’t really get too upset about it.

On a technical level everything is fine too, with the 3DS pulling out its bright and chunky graphics with lots of colour and particle effects as rain, snow, leaves and insects drift across the screen while you potter around the game world. It has a kind of Windwaker-esque kind of feel to it with nice character designs which are a great fit for the game. Whilst the controls requiring you to switch from button to touch screen play a lot don’t quite feel natural for the most part, they certainly don’t become unwieldy or annoying. For the record I did take a look at the game's use of 3D, and all you can really say is that it’s there and it works. It adds nothing to the game and one can’t help but wonder if games will continue to implement it at all now that the Nintendo 2DS is on the horizon.

The careful reader may have noted that I wasn’t being overly enthusiastic in the previous two passages. Sadly this is because there isn’t really much to be enthusiastic about in Harvest Moon as it’s unforgivably boring and unwieldy. For starters, the fact that I was still receiving tutorials around ten hours into the game is not a good sign. It makes everything feel like you’re having your hand held whereas it would have been much more fun if you could just access everything from the start and find a tutorial if you want one. Dozens of fishing points are scattered all around the map, with your character cheerfully telling you they could fish if you had a rod despite the game not bothering to give you one until about six hours in. The fact that you have to do everything yourself in the game is also massively annoying given that you have limited (albeit renewable) stamina and a time limit per day. Missing out on watering your crops or feeding the cow for a day or two has consequences in-game but by the time you’ve done it for the eighth day in a row it quickly loses its appeal, as does wandering into the woods to pick up insects to sell or branches that must be individually hit with the axe to become timber to build with. Its micromanagement to an utterly pointless degree and there are so many minor changes that could have been made to make this a more pleasant experience for the player.  It also means that everything moves glacially slowly as everything takes on an enforced sedate pace even when you upgrade to better tools – the upgraded watering can can water multiple crops at once but the fact that you have to hold down the button to charge it means there’s next to no time difference between using it and the ordinary one.

I can see where they were going with A New Beginning, and can grasp why they made most of the decisions here, but it feels like no-one ever took the time during development to stand back and look at how it all worked as a whole. It really gets to me, as on paper this game should be tailor-made for me but in practise it’s something that I can’t really see anyone enjoying for long. It very quickly goes from being a game to being a chore and that’s the death knell for something like Harvest Moon. I'm honestly unable to recommend this to anyone – it's too slow to hold the interest of young gamers and older ones will be bored silly at the lack of complexity and the endless repetition. One to give a miss here I’m afraid.