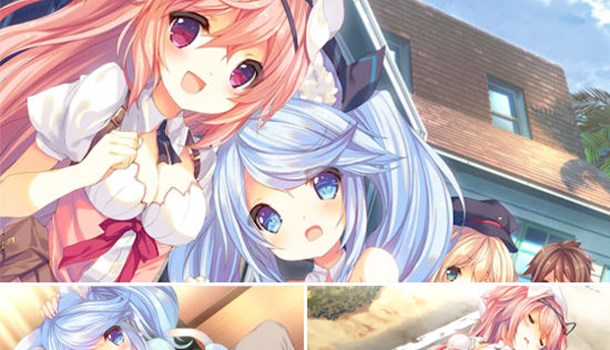 Set in a post-apocalyptic future, Karakara is a visual novel which takes place in an arid desert. Humanity has split and evolved, with a new breed of "others" appearing in great numbers. The story begins when the owners of a small diner at the end of town discover a young, pink-haired girl unconscious beside a suitcase on the edge of town.

I'll confess that I don't play many visual novels, so many of the mechanics that seem new and interesting to me might not impress the more hardcore connoisseurs of the genre, so what I'll concentrate my review on are the more universal aspects - presentation, writing and story.

Let's start with the most immediate of the three and look at presentation. The artwork is beautiful, with some gorgeous character designs and impressive background detail. I've had a few people peering over my shoulder while playing the game, and it's the sort of work that deserves an artbook down the line.

The story setting is pretty worn by now. Post-apocalyptic wastelands are really ten-a-penny these days in every medium, but what works here is that it's never really any more than a backdrop to the main story, an ingredient rather than the whole meal. Whilst the game offers nothing groundbreaking, the slice-of-life style works well, and managed to maintain my interest.

The writing, which is especially tricky given that the dialogue has to be translated and maintain its impact, is critical in a game like this. Thankfully the translation is solid and the interaction between the characters is entertaining and lively. All the characters have a meaningful contribution to make and by the end I was enjoying their company as the story progressed.

The soundtrack isn't bad. Not really my sort of thing, but quite chilled out and while the majority of background music isn't very memorable, a few of the songs are catchy enough - Calm Days and Prank are standouts.

You can clock the game in a few hours, so it's not expansive by any means. Your mileage may vary for whether or not this short burst of entertainment is value for money, but for effectively £7 it's comparable with a film rental, and twice as long. And if you're old enough, the 18+ patch will give you a bit more bang for your buck.

The All Ages version can be purchased from DL Site here

7
Recommended for a short burst of Moe goodness, even for noobs like me!