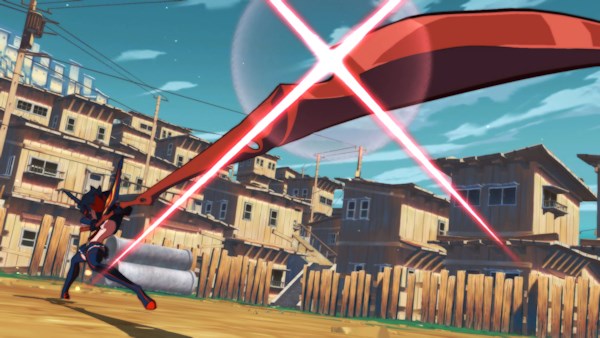 I have to confess that I've never actually seen Kill la Kill, but I am aware that its a stylish anime with a good number of fans. Having played the story mode for this game, I'm not only a bit of a fan now, but I'll be tracking down the anime to catch up with some of the original and entertaining themes I've been seeing writ large throughout this slick brawler.

The meat of the game is an arena based fighter with some lovely graphics perfectly capturing the exotic animation and designs of the original show (I watched a few AMV's for reference!) Initially the game is locked down very tightly - after creating 4 sets of data (snore) and finally getting to the main screen, all that was available was the story mode. To unlock local and online vs play, you must first learn the game and understand the characters. This may frustrate some, especially if you've been playing with a freind and then buy your own copy, but for me it was a solid introductiuon to both the fighting mechanics and the characters.

The story appears to follow the anime pretty closely from what I've read online. There's a lot of cut scenes, created using the in-game engine which does a tremendous job of retelling the story, peppering fights into the mix as you go. Again, I can see how the lengthy cut-scenes might make the game dull for those of a more impatient nature, but I enjoyed everything presented and got into the swing of things - by the end of chapter 10, I was just dying to try playing some new characters (you are locked into playing Student President Satsuki Kiryuin for this mode.

When you are given control, battles can take on a number of formats. Initially one-on-one against series protagonist Ryuko, and later against multiple enemies - amusingly some of these multi-character battles are free-for-all's, other times it's you against a horde of characters. This changing-up of the pacing really adds to the spicey variety, and I was tremendously entertained throughout.

Combat is smooth and intuitive, with the controls nicely divided into up close, range and specials without requiring complex motions to activate them. Everything is done by button-combo, and once you have this straight in your head, combat is fast and fluid. The camera does a decent job of following the action, and only once or twice did I have to adjust what I was trying to do due to shifting angles. Once again, Arc System Works prove to be masters of brawling games.

The versus mode, which for me is always the meat of a fighter like this, opens up its treasures very slowly. Only a handful of characters are unlocked as you play through, with the elite 4 and the two main girls available after a few hours on story mode (Nonon is my favourite with her petite form, graceful motion and awesome noise-based attacks) so you'll be grinding for a while before unlocking the full potential here.

You can also unlock music, voices and in-game models in various poses, either by victories or earning points to spend in-game. Most of them are pointless, but are a nice feature to give a feeling of accomplishment if you like this kind of extra content.

So presentation, audio and style are fantastic, but for a fighter, deep mechanics are what keep it alive. While the game does have an exciting and fluid air during battle, repeated play starts to reveal the lack of real depth that the game needed to contend with other offerings out there. It's a terrific game for light play, as it doesn't take a huge amount to master - by the fourth battle I was consistently getting A ratings (plus an S) which should be almost impossible on a game like this.

Subsequently, once the razzle-dazzle of the game dies down, what you're left with is an entertaining game which is great for short bursts that will be most appreciated by fans of the series. Rarely, if ever, is a game so faithful to the source.

8
It translates the anime to the gaming arena with uncanny effect, and while short, tremendous fun while it lasts!