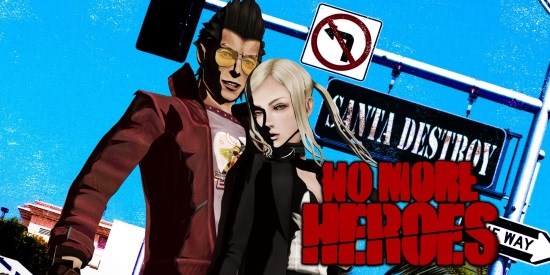 In the beginning, the Wii was a vast sea of family friendliness so clean that it might have been a console made by Disney. Then, just two years after launch that glorious nut Suda 51 arrived on the console like a cloaked Western Gunslinger and brought out No More Heroes and drenched the purity of the Wii in an avalanche of blood and swearing - and boy was it good fun! Flash forward a staggering 13 years and the game is back, now freshly ported to the Switch and we must ask the question – does the game still hold up if we firmly remove our rose-tinted specs?

What No More Heroes reminds me most of these days is the Yakuza franchise, or at least a version of it (though that series started 2 years before this one). Think about it – you have a big, free-roaming city, lots of weird and wonderful characters, weird mini-quests, side-jobs and a crazy story designed to take sudden turns every time you think you know what’s going on. There’s definitely a lot of similarity there. Once you get down to the details though No More Heroes does things quite differently.

For starters the gameplay is a lot more straightforward than in a true open world game. You undertake a mini-game to unlock a combat mission to get money to unlock the next boss run, then fight through a bunch of henchmen, then have a boss fight. 10 times in a row. That’s basically it. Now of course a lot of games can be broken down into a list like this pretty easily but the issue here is in how much fun it is to do the leg work; sadly it just ain’t that much fun here.

After each boss fight you’ll find yourself needing a huge chunk of cash to get to the next one. If you want to indulge in any of the game's other goodies like stat increases, clothes or weapons then you’ll need even more. The only way to get enough cash is to grind like your life depends on it and sadly this makes things a huge slog. The job mini-games range from mildly amusing (collecting cats) to downright dull (cleaning graffiti) and yield so little cash that it’s never really worth playing them more than once, which is the minimum you'll need to do in order to unlock all the combat missions. These still don’t yield all that much but at least you’ll get to your goal after playing them a few times, especially once you unlock a few. Neither of these things would be so bad if it weren’t exacerbated by the city itself. I’m not sure why a full city was modelled in the game because there’s not really much in it. There are a scant handful of shops and random mission start points and not a lot else, but the city is huge (despite only being populated by about 4 people and the odd car) and you have to drive everywhere on Travis’s pretty slow and cumbersome motorcycle whilst trying to navigate by way of a map that only shows you vaguely where to go and doesn’t really have much in common with the environment its depicting. The whole grind of having to drive everywhere with nothing to distract you on the way becomes boring quickly.

This is a real shame as the actual combat side of the game is really good fun. Both the standard and (optional) motion controls are fun to use and slicing, dicing and, er, suplexing (Suda 51 likes wrestling quite a lot apparently...) through enemies is satisfying, visceral and engaging in a way that many hack-and-slash games still fail to achieve today. Whilst a little more enemy variation would have been nice, as would more variety of location, these sections serve as a nice little warm-up as you head into the real meat-and-potatoes of the game – the boss fights.

The bosses in No More Heroes are frankly what you buy the game for. Every single one of them has more visual flair and fun mechanics than the best boss in most other games. One minute you’re fighting a costumed hero and the next a marvellously mad magician. The fights and their associated cutscenes are huge fun and almost all of them could have served as a main villain in a game of their own. In fact only the game's final boss disappoints as the designers gave up on fun mechanics for that old fall back of ‘99% of your attacks will be dodged and they knock off half you health every hit’.

That really is No More Heroes in a nutshell – tedious grind followed by a tremendous sequence that any other game would give its eye-teeth for, followed by more tedious grind. The only other element to comment on is the story and that's...well, it’s largely as inconsistent as the rest of the game to be honest. The idea seems to have been to make something shockingly adult on a family-friendly console which probably did it a lot of favours, but in today's world the whole thing actually feels pretty tame. Oh it’s very bloody, there’s fan service a-plenty and the characters swear like sailors but these days swearing isn’t really a big deal, the violence is rather neutered by the games visual style and the fan service is sexy enough but feels like it was probably supposed to have gone much further if it weren’t for the fact that the games industry still hasn’t wrapped it’s head around the fact that sex and nudity should really be seen as more acceptable in games than rampant ultra-violence...

It’s also can’t quite decide what it wants to be – serious one minute and running meta jokes the next. For example, love interest Sylvia seems to have about 4 different personalities that she randomly swaps to depending on what gag the story demands! There are certainly more than a few story threads that it would have been nice to have fleshed out more and resolved properly.

It really does feel like I’m coming down pretty hard on this game but I have to stress that the bits of the game you come for – the boss battles – ARE fun and really worth playing through and the madcap story, despite its inconsistencies, is pretty great too (one wonders why no-one has given Suda 51 a movie yet as his games often make you feel like that’s what he wants to be doing).

Plus the game's low price point and relatively short play time make it it quite appealing in an age where most ports and remasters go for full price (although unfortunately it does have to be pointed out that as best we can tell this is for some reason a port of the Wii version and not the PS3 version which had a fairly significant amount of extra content and fixes).

Our advice is that this is probably worth taking a chance on and having some fun with if it remotely appeals to you. As for all those issues? Well, we’ll see if and how those were dealt with… in our review of No More Heroes 2: Desperate Struggle soon!

7
Incredible bosses make up for a lot of dull busywork.