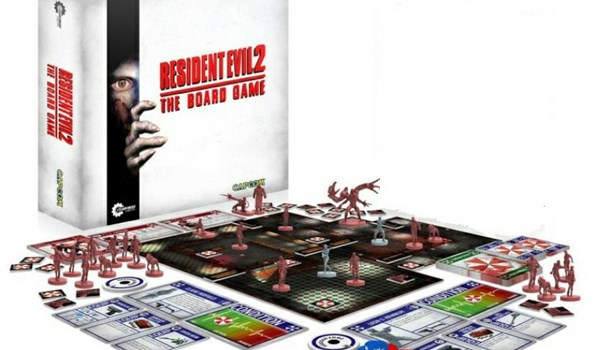 Resident Evil 2 The Board Game

I would assume most people have heard of the Resident Evil franchise. Perhaps most people have also played one or many of the video games. However, if it passed you by, here's what to expect;

A bizarre incident occurs in the Arklay Mountains, on the outskirts of Raccoon City, causing residents to become ravenous undead monsters! This is the nightmare that faces you, and you must find a way to escape with your life.

Set up and Instructions

My first impressions based on appearance and quality of the player pieces were that they were distinctly average. This was only confirmed as I worked my way through the set-up, which is a clearly meant to be atmospheric and moody (which it is) but it's impossible to see clearly. Despite this I was very impressed with teh single player setup and set pieces. The weapon dials are particularly adorable.

The instructions are long and complex, but very well laid out and it didn't take much effort to find the sections required to set up the board.

Due to the expansive nature of the game, every new scenario teaches you a little more about the game as you expand your understanding in bite-sized pieces. I love the way you can get stuck into the gameplay very quickly, knowing that the next tme you come to playe, there will be another, very manageable learning process. This will then lead to a new exciting game each time you get this to the table. It feels like ytou won't need to buy a new game for a while, and the expansion packs available should keep you going even longer.

Once the scenario board is set up, you choose a character from the four available girl power is fairly prevalant here, with 75% of the characters being of the female persuasion.

Turns consist of three phases per "activated" player. Actions, reactions and then pulling a card from the deck to move the story on. There is a handy quick reference sheet at the back of the instructions so that gameplay isn't interrupted by constantly trying to find the correct page for your particular issue.

Reaction Phase:
Resolve actions by enemies - either moving or attacking.

Tension Phase:
Draw and reolve a card from the tension deck.

The game plays smoothly and quickly, with issues regarding "option paralysis" not proving to be an issue here. Each activated player has the chance to perform 4 actions from the 6 available. This is a good ratio and elevates the game above similar co-op games in my opinion - you never feel too confined and can make a move without feeling you are making too many sacrifices.

Each scenario has a new objective, so it's important to keep your longer term goal in mind when making decisions in the short term.

Generally, you'll be escaping the zombie onslaught at all costs. Depending on which player you picked, and which scenario is currently in play, there will be a number of varying aids at your disposal. These aids will have a huge impact on your strategy - much like the video games resources are always limited. Strategy, therefore, is of supreme importance.

I love both the fight or flight mechanics, as well as the dice-rolls to determine success or failure, adding genuine tension to the gameplay

I had a lot more fun playing this than any other co-op game I have tried so far. Partly due to the knowledge that none of the future games would completely emulate the scenaio I had just faced.

The game has great relayability. I can see that some of the scenarious would be very complex and could take a number of hours to complete. Each new stage brings new challneges, board game pieces and themes. There are likely to be entirely different objectives as you travel theough the Resident Evil world, which add yet more alternative game play and styles.

I also felt that, ulike many other co-ops, you could have more say over how much player inteaction was utilised. There may well be one main objective, but I felt a lot more in control of my indivisual actions and obectives than I have in other, similar games. The  tricky thing about games of this type can be the lack of real free will you can realistically employ in order to win - often the game will force you to take a series of actions, eliminating your options and turning the game into a mechanical experience.

The variety of options on offer make it interesting and accessible to most ages (appropriate to the content of course) so there's scope for players of all abilities to pick up and enjoy the game. I love how inclusive it is.

My only gripe with the game is limited to the design. The game pieces look far too cheap, and the board is way too dark and is such a waste of the designers abilities, with all their hard grafting pretty much redundant. Considering the price point I was surprused that the game didn't provide a few baggies to separate teh compnents when packing up. Currently everything is chucked in messily at the bottom of the box - more than aggravating to my OCD!

If you are a fan of co-op games in general, I can't recommend this game enough. It is different enough from some of the other big names in th emarket to be worth adding to your collection. The enduring complexity whic shoudl make it a regular at the gaming table. With expansions already available, this only adds to its replayablity. If, like me, co-ops leave a bitter taste, then this may be the game that changes your opinion. Simple enough to pick up, but complex enough to last, it'll be a while before you find your interest waning.

I also have a soft spot for dice-rolling, and this is the best integration of that mechanic I've played in some time.

The game only loses a couple of points due to poor design quality and the fact it is still a co-op. At the end of the day it's just that bit more fun to screw over your friends than work with them (Am I a bit sadistic? Maybe...) But as co-ops go, this is the best I've played to date.

8
A tremendous co-op game, simple to pick up and complex enough to last.
LATEST REVIEWS