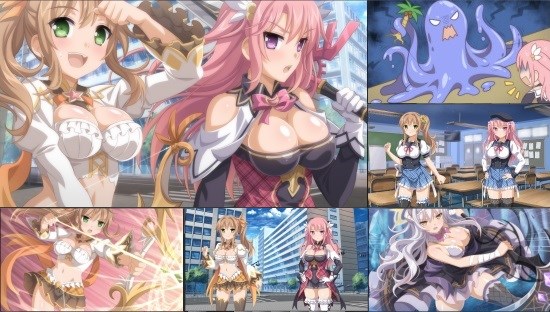 Sakura Angels begins with Kenta, your typical ordinary high school student who is suddenly saved from savage monsters by two girls who possess magical powers, and through their initial conversation they let slip that they have been watching and guarding him for a while due to mysterious reasons that they cannot divulge. The increase in monster attacks forces the girls to transfer into Kenta's class in order to keep a closer eye on him - luckily since they are so close to Kenta now they are able to fend off the advances of a mysterious witch who attacks the trio at night in order to steal Kenta away.

From the offset, Sakura Angels provides a rather thin and cliché-ridden narrative for a game. The story follows a predictable pattern of Kenta meeting the girls in the morning, attending school with them, being attacked on their way home by the witch right until the very end where the main point of the plot comes to the fore. Up until this point the story follows a rather strict but predictable routine in order to provide comedic moments, mostly based around the girls inability to cook and the accidental "perverted" moments the characters get into. While most visual novels tend to have a very slim plot in order to have it as an excuse to get to the adult material, the problem with Sakura Angels is that it doesn't have the same level of adult material others in the genre have. For the most part the game tends to feature panty shots and pictures of the girls in compromising positions, and there is one instance of full nudity on display but it is rather brief and handled comedically.

This really begs the question of who the game is catering for. The plot itself is incredibly cliché and does not really do much expect provide a premise and excuse to get the characters together, and the story does not provide much drama or even enough interesting plot points to get you to care about the characters. The plot of the game isn't even fully divulged till near the end, and even this only serves as setup for the game's climax, which ends just as quickly as it is brought up. Also the fan service itself is rather tame compared with other, adult, visual novels meaning that there is very little incentive to get through the story as there is no pay off for anything. The comedy itself is more miss than hit, with not a single joke or comedic situation making me laugh at all. This, coupled with what feels like low budget presentation, doesn't make it stand out at all.

This is evident by there only being four main characters in the game, three of which are shown on-screen with the fourth being the protagonist/player. The game itself has a forgettable yet serviceable soundtrack that compliments the scenes well enough when it plays. Other than this the game has no voice acting to speak of, choices are very clear cut and defined, only providing extra scenes with one of the girls but having very little impact on the overall plot of the game.

The characters themselves fall into various stereotypes. The protagonist is a typical loner high school student, and of the two girls that appear Hikari is your typical tsundere and Sayaka is the stereotypical hyperactive cheerful girl. The art is quite nice and displays the characters well, however the game makes use of a lot of still frames with very little in the way of changes in character art and animation. This means that there is very little incentive to replay certain scenes and choose other options.

The saving grace of all this is that it feels like an entry level visual novel. The story's incredibly simple, the fan service and nudity are rather tame compared to other games and the visual novel itself is rather short. Depending on reading level a single play through takes about three hours or so - overall, Sakura Angels can only be recommended for those who want an incredibly short and simple visual novel.

You can find Sakura Angels available to purchase in digital form via Steam.

4
A very simple and short visual novel that doesn't provide enough of a story - or anything else - for it to be memorable.