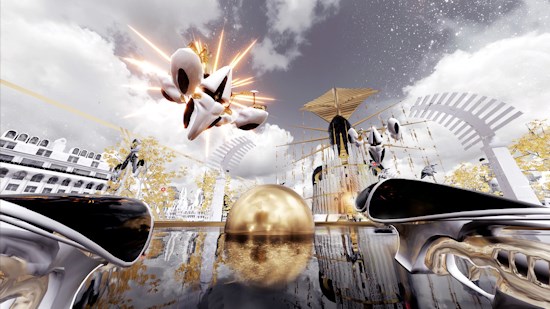 Now here's a curio - we were offered a review copy of this game on PC, and as it happens James has a pretty impressive Vive rig for just such an occasion. So in we go!

Singularity is an impressively odd beast. Essentially a wave shoot-em up with a distinct aesthetic, the ostentatious visuals are incredibly impressive. You'll be fighting off swarms of incoming enemy AI drones all begging to suck on one of your bullets.

Set in the year 2050, an AI uprising in Paris must be stopped, and you are tasked with surviving 5 increasingly nightmarish levels of bullet-hell to do it. Starting in a lift heading toward the surface, you learn the basics quickly - shoot, lob grenades and take out any AI or spikey red mines that are coming for you, before reloading and doing it all again.

The lift is impressive and daunting enough, but make it to the top and the graphics are simply unbelievable. The black, white and gold palette is beautifully realised atop vibrant backgrounds, and you could probably have just as good a time exploring the bizarre structures as you can blowing the hell out of robots. It really is a stunning graphical achievement by Monochrome Paris.

Gameplay is as fluid as the architecture, and I got pretty lost in just blasting away - starting with duel pistols, you'll graduate to grenade and machine guns for maximum carnage.

Where the game really shines is the replayability stakes. It's as tough as my Mum's Yorkshire Puddings (trust me, they're rock-hard) but if you're a hi-score chasing, gun-slinging, VR-owning desperado, you'll clock up hours of fun trying to beat your last hi-score.

For a game I wasn't really looking to review, I've had a literal blast with this one. Those of you lucky enough to have the rig for it need this game in your collection. It's mind-bogglingly cheap too, so you really have no excuses. Strap in and gun-up. VR robots need to eat your virtual bullets asap.

Have a taste of the lush visuals below:

10
Beautiful, fluid, challenging and addictive. Now off you go, Daddy needs to kill some robots...