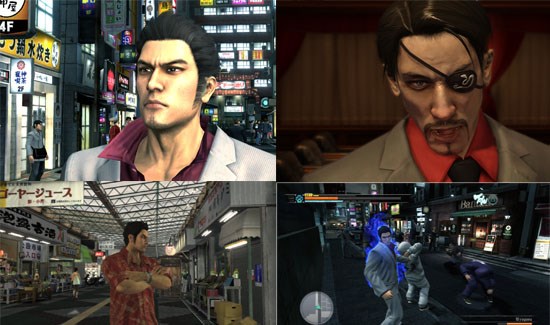 Yakuza is the game series that Sega keeps telling us is "too Japanese" to translate and release in the west but always seem to end up doing anyway... even if it takes them two years to do it. After two adventures on the PS2, we finally get the PS3 incarnation of the series, but how does it fare against the previous titles?

The game takes place two years after the events of Yakuza 2, with Kazuma Kirya now running an orphanage in the Ryukyu Islands of Okinawa with his adoptive daughter Haruka. The game starts with an assassination attempt on Daigo Dojima, chairman of the Tojo Clan which is connected to a land deal that will see Kazuma evicted from his land to make way for a new beach side resort. It is down to ex-yakuza to stop the deal and find the assassin.

While knowledge of the first two games isn’t needed, the game does helpfully included the abridged stories of both games to at least bring you up to speed concerning major characters and events. Apart from some returning characters, Yakuza 3 is very much its own story, so you can enjoy the game.

Any of those that have played the first two instalments will be able to slip straight back into this game. Yakuza can best be described as a brawler with a mixture of RPG elements which involve levelling up and customising your character with new moves, going on missions to gain more experience, having the odd random encounter and beating up the locals. It’s an RPG with a brutal fighting mechanic that will have you whining when you encounter your first head stop or interface a gangster’s face to a wall. It is intensely brutal stuff and justifies the 18 rating it has.

Basically then, the game is the same as previous instalments in the series. Improvements have been made with a dramatic reduction in loading times, though a twenty minute install is required when you first put the game into the PS3. Combat is not as random as it used to be, though it is still very easy to get caught in a combo and lose a lot of health. The average player will not encounter much resistance until a boss fight, but bump up the difficulty of the game and you will really be feeling the strain, especially with the chase sequences. A new addition is the ability to modify you own weapons. You get plans from DVDs or magazines, get the correct items and then take them to a weapons dealer to craft into a custom weapon. It’s not hugely different from the crafting found in most RPGs, but it does add some additional RPG flavour to the game and it isn’t required to complete the game.

If you concentrate purely on the story missions, Yakuza 3 will be over in about fifteen hours, but with the wealth of content in the game you’ll easily be looking at another fifteen hours just to complete everything; even then you have DLC which comes with the UK edition that has a range of new challenges to try your hand at. Even with some things removed, you still get plenty for your money. The opening section does take an unbelievably long time to get going, but once the world starts to open up, looking after kids isn’t that bad.

Fans of the game have been quick to denounce the western release of the game as some sections have been removed. The Japanese trivia quiz was one such section, but personally I’d live without that myself. I might like Japanese culture, but I don’t know that much about it. The one that has gotten the fans ruffled is the removal of the Hostess Clubs (Wiki link) apart from ones that are integral to the main story of the game. There are a handful of games that are also missing, but to be honest while it is shame the Hostess Clubs are missing, along with their romancing of club hostesses, it doesn’t stop the game from being fun to play.

Those who loved the first set of games will enjoy Yakuza 3 as another dose of what they want. While sections are missing, the game is still a lot of fun to play. It does have a painfully slow beginning, but once it finds its feet the game keeps on a charge until the very end. It’s a nice alternative to the usual RPG landscape and makes for a good alternative to Final Fantasy XIII. We can only hope it doesn’t take two years extra for Yakuza 4 to make it to our shores.