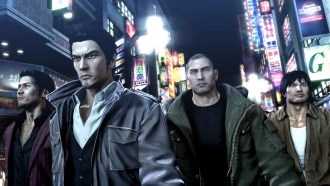 We’re huge fans of the Yakuza franchise over here at UKA and over the past few years we’ve sunk hundred’s of hours into what is unquestionably the best open world sandbox action game franchise ever made (Grand Theft who?) despite only having discovered it with its PS4 releases. Therefore when Sega announced that not one but 3 of the games not available on the PS4 were being remastered, to say we were excited was putting it mildly. Now that we’ve put all three games through the wringer it’s time to give our verdict on the Dragon of Dojima’s lost years (to those of us who hadn’t played them on PS3 at least).

A couple of caveats before we begin however. Firstly, it’s important to note that these are merely HD remasters of the original games and NOT fully rebuilt games ala Yakuza Kiwami and Kiwami 2.

Secondly this is not a complete collection of the other games that don’t have Western PS4 releases. There are at least 6 other games in the franchise not including the forthcoming Yakuza 7. Whether Sega intends to bring these over too is presently unknown.

As you might expect from a Yakuza game, the trio of entries here all follow a variety of nefarious plots as factions within the various Yakuza factions battle for financial dominance over the districts of Japan whilst all making the same fatal mistake of not understanding that attracting the attention of Kiryu Kazuma is probably only good if you want all your men to be eating through straws for the rest of their lives… In Yakuza 3 a real estate plot threatens the orphanage to which Kiryu has retired to, the fourth game sees an escaped prisoner wash up on the beach outside the same orphanage drawing Kiryu into another plot whilst Yakuza 5 sees Kiryu being forced to deal with the disappearances of several former associates.

In terms of overall gameplay the trio present pretty much the exact pattern of bloody combat, exploration and mind-boggling quantities of mini-games that we’ve all come to expect from the franchise but the devil as they say is in the details here and that brings a question to the fore. How do you judge what is for all intents and purposes a retro game collection when your only experience has been with the sequel games? It’s like asking someone who’s only played Breath of the Wild to go back and play the original Legend of Zelda. Things are not as they once were and that is a bit of an issue here as all three of these games are distinctively lacking when compared to the subsequently released games (particularly the still unsurpassed and sublime Yakuza 0).

Yakuza 3 as the oldest game fares the worst as you might expect as it’s the least graphically advanced, has the least features and serves as a case to show just how far the games have come in developing that wonderfully bizarre tone the games now have as Yakuza 3 plays things pretty straight which feels odd nowadays.

Yakuza 4 fills things out more and attempts a much more intricate plot but unfortunately decides the best way to tell it’s story is to introduce 3 new playable characters. This not only means that Kiryu doesn’t become playable until about 11 hours into a game whose main storyline only takes about 14 hours but also means you have to spend a depressing amount of time playing as Taiga Saejima. On the plus side the loan-shark-with-a-heart-of-gold Akiyama is a blast and each of the characters have their own distinctive combat styles to keep things varied (even if Taiga’s feels like beating your head against the controller for 10 minutes till he eventually gets through the animation of throwing a single punch).

Yakuza 5 as you might expect, is the closest to the newer games. The comedic elements are starting to be introduced more and the writing is much improved. However the developers seemed to think that the way to improve on the awkward multi-character story of Yakuza 4 was to double down and go for 5 playable characters this time. Worse, they still seem to like Taiga and his mind-numbing story ends up dragging you through a dream sequence in his own imagination as he basically pictures another character telling him the story of how he beat up some guys then pulled a hostess. This is then followed by what feels like hours of tutorials for an (admittedly detailed) hunting mini game, and then trudging through Sapporo the worst of the games three new cities. On the other hand bringing in Kiryu’s ward Haruka as the 5th character is a stroke of genius and you can only assume the Project Diva team must have been brought in to work of a series of idol-based mini-games that we’d happily see fleshed out into a full game on their own!

One thing the three games all have in common is how janky the combat is. Unfortunately even on the lowest difficulty setting many of the enemies are contact to simply block every attack you make with a block that can rarely if ever be broken (your own blocks will stop about 2 punches) before stun locking you till you’ve lost half your health. 4 and 5’s multi character system also means that the random-ish mob encounters on the street have had to be made much more frequent and nigh-on impossible to avoid as each new character has to be individually levelled up and the developers are trying to expedite this as much as possible. As the games progress a lot of the combat elements you love do start to come to the fore however and Yakuza 5 in particular has some of the most bone-crunching finishing moves the franchise has ever produced.

It all sounds like I’m being very harsh on the collection and this is where the issue in reviewing it lies – it just isn’t possible to totally divorce yourself from the fact that you’ve played the four main-line games that came after these and the staggering increase in quality that came with them. There is genuinely good stuff buried in here – Haruka’s idol sections are superb for example, and there are driving mini games that prove to be shockingly relaxing and fun not to mention half a dozen other mini-games (a round of Taiko no Tatsujin anyone?).

Ultimately though I’m forced to draw the conclusion that unless you have fond memories of these games and your prepared to nail those rose-tinted glasses to your head then what you get here just isn’t enough. At best just pick up the downloadable version of Yakuza 5 if you really want to but honestly without the full remake treatment all but the most die-hard fans will be disappointed with this collection.