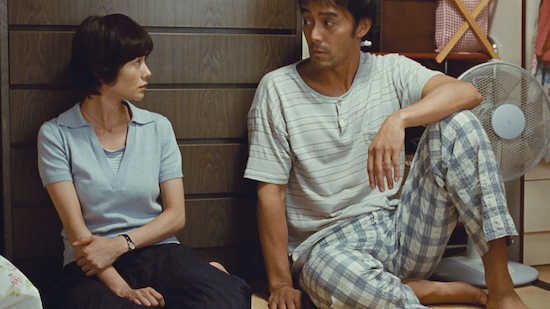 Distilled down to its basics, After The Storm is in many ways the quintessential ‘Dad’ movie - following beleaguered author-cum-detective Ryota (played with infectious charisma by Hiroshi Abe) as he struggles to cope with both his gambling habits and his estranged wife and son. At the heart of the movie is Ryota’s elderly, recently widowed mother; her cluttered old apartment a kind of modern day oasis amidst the hectic realities of modern urban life. And it’s here that Ryota, his ex-wife and son find themselves when a typhoon hits, sheltering out the titular storm as his mother tries her hardest to bring the family back together.

Originally released in 2016, After The Storm treads familiar territory for Kore-eda - indeed, it’s fitting that this standalone release of the movie hits shelves the same day as Arrow Video’s Kore-eda ‘Family Values’ set that pairs this movie alongside two of the director’s other efforts - I Wish (2011) and Like Father, Like Son (2013). Much has been made both of Kore-eda’s rise to the fore as arguably Japan’s most acclaimed contemporary filmmaker, and his incredibly evident debt to the style of Yasujiro Ozu. Static camera framing abounds in After The Storm, as it does in so much of Kore-eda’s work - and some scenes, such as those of trains moving sleekly round a curve in the tracks, are almost shot for shot remakes of Ozu set-pieces. In this sense, there’s an effort almost to envision Kore-eda’s movies as playing out the same heartfelt vision of the Japanese working classes, but merely updated for modern times. But in seeking to crown Kore-eda as some kind of prodigal son of Japanese cinema, or a sort of ‘reborn’ Ozu, there’s a tendency to over-mythologize, and forget to just stop, relax and appreciate his movies for the quintessential ‘homely’ beauty they so often epitomise.

There’s an utterly divine, washed out aesthetic to the film stock itself here, painting everything in a subtly bleached look that recalls the halcyon mid-90s days when world cinema was beginning to become a highly marketable commodity on home video. After The Storm is a thoroughly 21st century story, but it could have just as easily been set ten, twenty or even thirty years ago without batting an eyelash in terms of the cinematic treatment. Kore-eda has always been a real film-maker’s filmmaker - his shot composition speaking with a lyrical beauty that’s the sort to have film buff’s crooning with glee, but it deserves re-stating just how effortless he makes it all look. In scenes as simply as an old woman making instant coffee, or a brother and sister chatting amidst the greenery of a tranquil park, Kore-eda applies an almost liquid-like elegance to the ‘everyday’. This might be the epitome of a kitchen-sink drama - but that kitchen sink has never looked quite as beautiful as it has here.

Through this exquisitely detailed, hyper-real backdrop, leading man Ryota is played with a brilliantly rugged playfulness - a man clearly still very much a child at heart. And yet, his ‘cool Dad’ shtick has its darker moments too, such as when he goes buying lottery tickets with his son, or foists unwanted sexual advances on his ex-wife; a man helpless to resist bad habits. If there’s anything to find fault in Kore-eda’s style, it’s that sometimes his worlds almost feel too real - too close to home. When cinema is so often a fantasy to escape from the humdrum of our own lives, staring out at what is often an almost-exact reflection can feel a little unnerving.

And yet, as we settle in for After The Storm’s two hour duration, we start to become just another piece in Kore-eda’s everyday furniture. Ryota, his ex-wife and son aren’t just an everyman family, they’re ‘our’ everyman family - their close-knit, yet troubled bonds eliciting an increasingly tender response. Those looking for a more clear-cut, straight up narrative ark won’t necessarily find it here - there’s no Hollywood-esque ‘and everything was perfect!’ denouement - instead, we are presented, as always, reality; a messy ambiguity of life’s many twists and turns. A snapshot of a few days in summer, one family’s trevails, and their little imprint on the world around them - a fitting tribute, if anything, to the beauty of the everyday.

Extras include a newly filmed intro to the movie, interview with the director, feature-length making-of documentary and trailers. The first pressing also contains a collector’s booklet with new writing on the film.