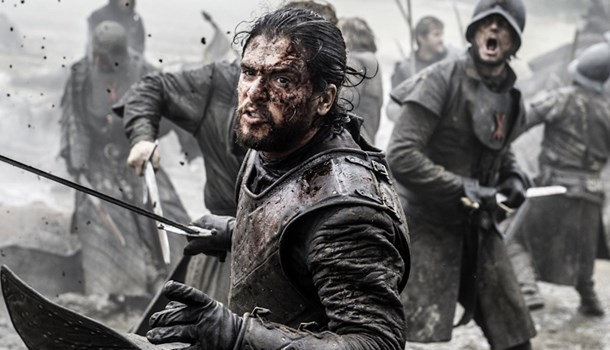 It’s pretty rare to get a full-on documentary about Japanese history, even more so if you want one that’s not about World War 2, so it’s great to see Netflix pull out not just a one-off documentary but a full-on 6 part series covering the Warring States period of Japanese history, a period which saw the rise and fall of some of Japan's most legendary Samurai. Indeed, even in the West it’s a rare anime fan these days that doesn’t recognise names like of Oda Nobunaga or Date Masamune - this is the story of their rise to power in what was one of the longest and most savage periods of warfare in history.

The chosen format is that awkward blend of talking heads and dramatic re-enactments that generally signifies that either the series was originally supposed to be a full on drama but the script never came together, or that the producers knew they hadn’t gotten anyone interesting to talk to. It’s certainly true that there are issues with both halves here - the re-enactments are largely voiceless, use a lot of repeated footage and mostly wants to try and be shocking by being very bloody (though we have to admit the CG effects are pretty good). The talking heads meanwhile are a fairly pedestrian bunch of academics sitting in a room talking to the camera with no two of them agreeing how to pronounce the names of the involved parties. It's also notable that only two or three of the speakers on Japanese history are actually Japanese. Behind the scenes a better effort could certainly have been made – you only have to look at any given Tony Robinson series to know that a really good interviewer could have made all the difference here.

It’s fortunate then that the story that unfolds across the documentary is really quite gripping in spite of the production issues. Japan during this time is divided up into a series of clans whose political machinations have been such that the country spends over 100 years in a state of near constant war. Make no mistake, this is not the period of the benevolent, honourable samurai so much as the period that led to it, whilst honing the warriors of Japan into some of histories greatest armies. It’s also interesting to note how some of the more modern depictions of Japanese history prove to be wrong. The Last Samurai for example made a huge deal about the Americans supplying guns to the Japanese and training them in their use whilst the Samurai rebelled against modern technology. However, we can see here that the armies of the Samurai and their Daimyo were using firearms over 100 years before the time that film was set!

On the other hand the whole series is basically totally focused on war so there's little here in terms of what life was actually like. The politics of the country outside the clan system are also rather overlooked, meaning that when later episodes suddenly introduce the Emperor and the Prime Minister you rather wonder what they’d been doing for all this time whilst everything else was going on.

If you have any interest at all in the history of Japan and it’s famed samurai warriors then, in spite of it’s issues, this is well worth a watch. As always this shows just how interesting history can be when some teacher isn’t trying to exclusively teach you the boring bits for an exam! If Netflix could fix the few issues there are with the series we’d be excited to see more series covering the fascinating history of Japan.