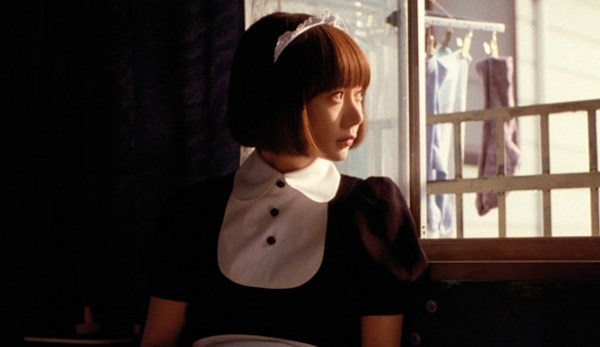 Air Doll has, it’s fair to say, one of the oddest premises I’ve ever seen for a film. The notion of “a sex toy that acquires a soul of its own” does sound unsettling at first, but perhaps surprisingly it’s a very moving piece of work that’s actually quite innocent in its execution and is much less cringe-inducing than you might expect.

Nozomi is an ordinary and unremarkable inflatable doll that provides her owner, Hideo, with his only source of companionship. Every day she sits alone in his apartment until he returns home from work... until one day when, for reasons unknown, she acquires a ‘life’ and heart of her own. Transformed into human form, she decides to explore the outside world, and falls for a young video shop employee who eventually discovers her true nature.

The origins and situation of this film’s heroine inevitably make for some rather uncomfortable scenes but I was pleasantly surprised that these were few and far between; its main aim is to address the age-old question of what ‘humanity’ means, this time using a character whose view of the world is a blank slate and whose contact with that world is through a number of very sad and lonely people.

It’s a relief to see that the early scenes in which Hideo eats, bathes and sleeps with Nozomi are not exploitative or gratuitous: as awkward as they may be to watch, they paint a vivid picture of a sad, pitiable middle-aged man who is, for whatever reason, living a life in which he no longer has proper emotional ties with anyone. Following her transformation Nozomi meets other people who are also suffering from isolation and longing, at which point the philosophical aspect of the film takes over.

The storyline is very light and meandering (appropriate given the nature of its heroine!) but it is brought to life through a charming performance from Doona Bae. Although she played a supporting role in Sympathy For Mr. Vengeance and had an important contribution to the high school drama Linda, Linda, Linda she proves herself to be perfectly capable of providing the range of expression that this leading role demands. A few notable names in Japanese film and TV also make some memorable appearances here, including Sumiko Fuji, Arata and Joe Odagiri, but this really is Bae’s movie and she steals it effortlessly.

The film also benefits from some wonderful cinematography that makes extensive use of the cityscape of central Tokyo. Imposing, impersonal skyscrapers loom over the older, tired-looking houses and shops of Hideo’s and Nozomi’s neighbourhood, highlighting the forgotten and insignificant perceived status of the people who live there. Although the film is largely thoughtful and melancholy – and the events that transpire are occasionally tragic – the presentation is beautiful throughout.

Also worthy of a mention is the soundtrack, composed by solo artist Katsuhiko Maeda who goes by the stage name of World’s End Girlfriend. Maeda specialises in ambient instrumental compositions that make use of a varied assortment of guitars, synthesisers and strings; although his style is often eccentric and occasionally chaotic, the meditative and atmospheric aspects of his music are what come through here. It complements the gentle, thoughtful and quirky nature of the story and visuals perfectly, and constituted a real highlight for me.

It has to be said though that as enchanting as this film is, the idea of sex scenes involving an inflatable doll might be a stumbling-block for some. Fortunately the focus is often aimed elsewhere, so the main challenges for most viewers are likely to be the slow pace and relative lack of dramatic weight since most of the events are very ordinary and ‘everyday’.

Overall though, Air Doll presents its themes and ideas with a deft hand and a keen eye when using subtle touches like panning skyline shots and short snippets of dialogue. As with his earlier effort, the delightful Still Walking, writer/director Hirokazu Koreeda brings out meaning and emotion from seemingly minor and trivial events to great effect.

8
Far from being an unsettling or unpleasant piece of experimental filmmaking, Air Doll is a delightful oddity that feels like a wistful, contemporary fairy tale.
LATEST REVIEWS