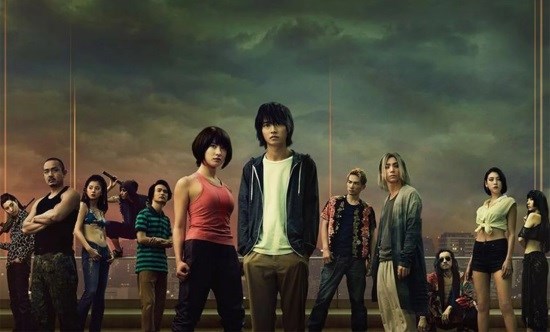 Whilst Netflix’s Japanese output (or at least the part of it that sees release in the West anyway) is largely dominated by anime releases of shall we say... variable quality, the streaming provider has also been quietly bringing over a few choice live action series and films. The latest of these is the fairly high-budget Alice in Borderland, a series which pays

Adapted from the manga of the same name by Haro Asô (which is not, as far as we can see, available in the West at present), the series follows NEET Ryohei Arisu - Arisu being a play on "Alice" and played by Kento Yamazaki, who also appears in the live action Jojo's Bizarre Adventure and Your Lie in April among many others. During a run in with the police following  some mischief with a couple of friends, the three find themselves suddenly alone, and the only three people left in Tokyo. There’s no power, hot food still steams where it was left and cars sit idly in the streets. As night falls however, the three are guided to a brightly lit building where they find they are not as alone as they had feared. There are others, and just like them, Arisu and his friends must take part in a series of games risking life and limb or else perish anyway as death will rain down from above!

We can’t tell you much more for risk of spoilers, but the set-up is undeniably great – a glorious blend of Gantz, Cube and No Game No Life, it's full of intrigue as the characters start to peel away the layers of the plot to uncover what’s really going on. On top of this Netflix appears to have provided a huge budget for this series as it’s visually stunning. Having been to Tokyo, it’s incredible to see places like Harajuku or the famous Shibuya crossing in broad daylight yet utterly devoid of people. Whatever, presumably digital, trickery was involved it sells the hell out of the setting in a way that so many other shows have never quite managed to do. The cast are really on form too despite most of them being stuck with fairly one-note characters. They really commit here which makes everything work brilliantly even when they have to deliver long plot exposition while wearing swimsuits or in the midst of having one of the coolest fights you’ll ever see in a disco (did we mention the stunt work is insanely good here?).

We can’t tell you how closely the series sticks to the manga as it’s unavailable (though we are aware that in the original Arisu enters the empty city from a fireworks display and here he’s in a toilet cubicle) so it’s difficult to judge how well it does as an adaptation. What we can say is that it could really have used Netflix giving things a bit more punch. The series is clearly made to Japanese TV standards and this has meant that the show never quite packs as much of an impact as it should. When characters die it’s never quite as shocking or visceral as it should be, and the lack of nudity makes what was clearly supposed to be a hedonistic near-orgy of a party look more like an S Club 7 music video (ageing yourself there Dan! - Ed).

It’s also undeniable that things go downhill in the last few episodes. A big plot event is so heavily telegraphed that the cast might as well be pausing their performances to wink at the camera. A character reveal makes little sense given the way they look and their explained background, and not least of all the series conveniently forgets one of the rules it established, which just skews the immersion more than a little. We do also have to note that the music is not a strong suit for the show, particularly the boring, overdone piece that plays over the opening titles. And of course the fact that Arisu himself seems to have such an aura of ‘I’m the main character’ that people seem to be rushing to team up with him for no reason at all is an issue shared by many other shows.

Despite the mild issues however, the series is good fun to get stuck into, and at only 8 episodes you’ll whiz through this first run. From the comedy gaming opening to the crazy twists of the ending, its all over in short order. It certainly has us desperately hoping that Netflix will shell out for season 2 and that someone somewhere will pick up a license for the manga!

7
Despite a few flaws this will keep you enthralled for the whole ride.