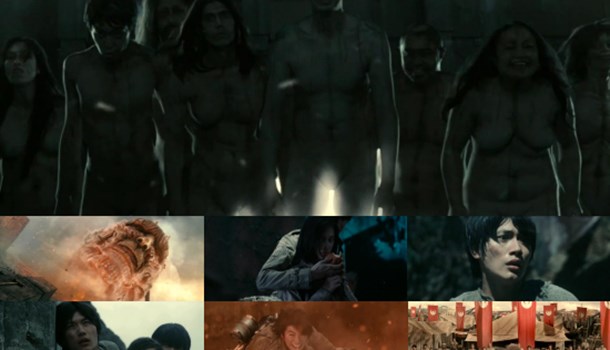 It may be an object of scorn and mockery for some, but there's no doubting the massive cultural impact that Attack on Titan has had not just on Japan, but upon the world since the debut of its manga and subsequent anime adaptation. We often talk about potential breakout hits amongst anime fans in the west, but this is the real deal - a show that all and sundry want to watch, often serving as a gateway to other similar fare.

Given the continued excitement around the franchise and with modern CG technology available to it, it was only going to be a matter of time before someone tried their hand at translating Attack on Titan into a live-action setting. You might have expected Hollywood to be the first to get their teeth into the franchise but no, instead we have this pair of Japanese films from Shinji Higuchi. This all-Japanese production does present some problems of course, but more on that later.

As far as the plot goes, even if you haven't seen or read the source material you're probably already familiar with it - one day, seemingly apropos of nothing, humanity was attacked by Titans; huge and largely indestructible humanoid creatures who only showed interest in feasting upon humans. To prevent their complete obliteration, mankind built huge walls to reside behind, granting them a century of peace... a peace that is about to be shattered by appearance of a colossal Titan that breaches the outmost of the city's three walls and causing chaos.

Right from the off, this take on Attack on Titan makes its differences clear. For starters, there's the cast - everyone is Asian rather than the largely European mix depicted in the original series, which brings with it a slew of name changes even though the core characteristics of each person remains from their "past life". This is an issue for reasons different to those you might expect - the ethnicity issue doesn't trouble the narrative as it's been crafted, but the story's insistence upon boiling characters down to caricatures of themselves gets old fast, especially in cases like Sasha and Hange where they become more of a cartoon than the comic book characters they're based upon!

Meanwhile, the story of these two films is intriguing in itself - at times dipping into iconic moments of the source material, only to veer wildly away at others. This, too, is obvious from the outset - remnants of a more advanced human civilisation are littered around this world, while horses have been replaced by motorised transport vehicles - not a huge deal-breaker if you're completely new to Attack on Titan's world, but it does dull the edge of the movies if you're expecting a similar treatment.

Taken at face value, the narrative of these Attack on Titan films is pretty solid - yes, it fiddles endlessly with various aspects of the original story but does a decent job of stitching together the core components of the fearsome Titans, the underlying human conspiracies and so forth into a story that can be wrapped up in a few hours for a cinema audience. All of the story beats are there to make for an entertaining, fresh take on this particular world...

...except the execution across both films is, for the most part, pretty abysmal. This is actually made more frustrating by the fact that on occasion these movies nail it expertly - the first Titan attack for example is fantastic in bringing out a sense of claustrophobic terror, as homes and churches suddenly become feeding troughs and the mass stampede of escaping men, women and children that you're thrust into the middle of as a view leaves your palms slick with sweat. There are a number of moments spread across these films that have you thinking "finally, this is the point where it all clicks into place" but no, it soon collapses again to leave you even more frustrated than the last time your hopes were raised and then dashed.

These frustrations come in numerous forms. For starters, the film's effects are as hit and miss as the rest of the production - at times terrifying or impactful in just the right ways, before the next shot ends up looking goofy or downright hilarious in its execution. The Titans mostly look the part, but the moments where they don't are the ones that stick in the memory. Also clear is the film's reticence to use the iconic 3D manoeuvre gear, finding excuses not to use it whenever possible during the first film (the buildings are either not tall enough or too close together time and again) only to reveal the reasons why when push comes to shove - it mostly doesn't look very good on-screen for moments that should be breath-taking.

The most egregious problem of the bunch however is the inconsistent tone of the two films. This is at least in part down to the scattershot acting of the cast, but the script is also to blame as it swings from romance and sex to death and violence in literally the same shot, while the second film somehow manages to turn a pivotal scene explaining the origins of the Titan and the entire reason for their existence into the most inadvertently homo-erotic thing ever captured in cinema. I've heard it suggested that this is no accident, but I'm not willing to give those involved the benefit of the doubt myself - playing to the proclivities of part of your audience is one thing, but doing it during one of the film's most serious key scenes is quite another. Still, at least seeing Eren and Levi... sorry, Shikishima (one of the replaced characters we mentioned), getting up close and personal in a scenario involving sun loungers, dressing gowns and champagnes was utterly, utterly hilarious. Oh, and there was a jukebox too. Yes, a jukebox that plays Skeeter Davis' The End of the World. In an Attack on Titan film. Did we mention the tonal mess of this movie yet?

In an odd way, this is Attack on Titan's saving grace - its worst moments are so laughably bad that they make the film a comedy triumph throughout many of its biggest moments, and watching with an audience that are willing to laugh long and hard with you makes the experience an oddly enjoyable one. Alcohol would probably help with this process too, although sadly this reviewer realised that much too late.

The key to whether or not you should watch these two Attack on Titan live-action films is entirely dependent on your feelings about the series. If you're a serious, dedicated fan who doesn't want to see your favourite work of fiction reduced to a silly laughing stock, then avoid these movies like the plague. If you don't have any grounding in the franchise, then do yourself a favour and check out the manga or anime before you even countenance this effort.

However, if you're an Attack on Titan fan that subscribes to the theory that something can be "so bad it's good" and is more than willing to laugh long and hard at a pair of films which only end up looking more like a comedy spoof of the series the harder they try to be serious about it, then boy will these films be a laugh riot for you. Just make sure you stay for the post-credits sequence after Part 2, for a special guest appearance from Stephen Hawking. Or something.

Attack on Titan Parts 1 and 2 were screened during the Glasgow weekend of Scotland Loves Anime 2015. They're scheduled for a future theatrical and home video release from Animatsu Entertainment.

5
This is a hilarious comedy spoof of Attack on Titan - the trouble is that it genuinely thinks it's a serious reimagining of this already iconic story.
LATEST REVIEWS
Blue Spring