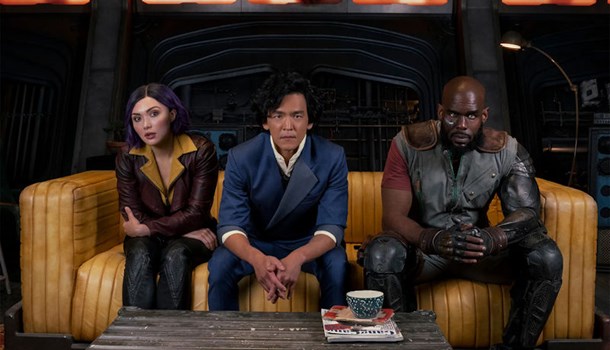 So, a brief disclaimer before we continue: I have never seen the Cowboy Bebop anime all the way through and have no real investment in the franchise. I've seen about two episodes and the movie and whilst I didn't feel it was particularly bad, I wasn't really impressed either and thought it was an average show with a killer soundtrack from Yoko Kanno.

With that out of the way, onto the review of Netflix’s live action take on Cowboy Bebop. Which is an average show with a killer soundtrack from Yoko Kanno.

In the distant future, mankind has left the Earth and branched out into the stars. Crime however has remained and the police are backed up by bounty hunters known as cowboys. On the ramshackle starship Bebop, cowboys Spike Spiegel and Jet Black are the quintessential odd couple as they seek out their next paycheque - or at least their next bowl of noodles. However whilst one seeks redemption from his past the other is desperately trying to hide it...

As a series Bebop more or less does what it sets out to do in terms of being a slightly irreverent sci-fi action-comedy. The cast are mostly solid throughout, with Daniella Pineda proving the standout as Faye. She gets all of the best lines and has the best character arc. Whilst hardcore fans have been whinging about the character’s new costume its understandable why they made the switch (though one wonders why they didn't just do it for one scene to check the box off?). There are some good gags and action scenes in a few episodes and, as previously stated, the soundtrack is the absolute star of the show. Unfortunately, beyond that the show just makes so many missteps that it undoes all the things that it does well.

The cast are great...but all of them seem to have a totally different idea what genre of series they're in and the performances don't really compliment each other. The direction and editing have similar issues and lack the flair and style that it feels like the show needs. This isn't helped by the soundtrack not always synching too well with what's happening on-screen. This also leads to really odd-feeling shifts in tone and visuals. The level of violence they're going for seems to constantly change. Nudity is present in the series but only in a place where it feels inappropriate rather than being in any of the multiple other scenes where it would work better and so on.

On top of this there are some pretty big plot issues. Spike’s backstory is clearly the big 'arc' plot of the series, but it’s also utterly boring on every level, offering nothing you haven't seen a million times before, not to mention the fact that it  commits the sin of totally wasting John Noble. I'm also deducting a full point off the review score for the character who gets introduced in the last two minutes of the series who is beyond hateful and has a voice so awful you'll want to tear off your own ears and use them to beat the actor, the casting director and their pet fish to death with the wet ends. This alone makes me hope a second season doesn’t go ahead.

With better, more consistent directing, editing and the excision of the whole Spike/Vicious storyline there could have been something pretty great here, but as it is it just doesn’t really offer enough on it’s own. In a post-Firefly world it just feels like a weak imitation (yes, I am aware that the anime came first). If you’re crying out for something to watch then you could put this on but you honestly wouldn’t be missing anything if you chose not to bother.