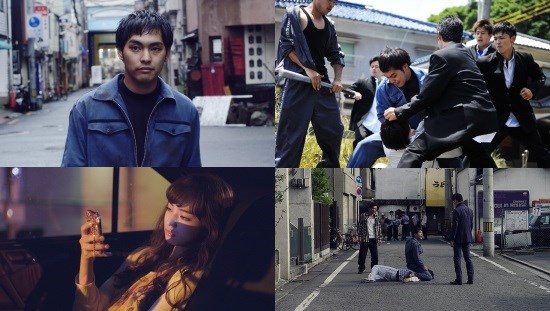 Destruction Babies has hit the UK... and then probably hit it again and kicked it whilst it was down for good measure. It’s... an experience, to say the least.

Taira is seen walking out of town being attacked by some local thugs by his younger brother. Before Shota can arrive on the scene however, Taira has upped and vanished into the city where he begins a spree of violence as he indiscriminately attacks those around him from schoolboys to old men. He’s soon joined by the impulsive Yuya who orbits him like a moth to a flame, becoming increasingly more and more engaged with the ensuing fights. Meanwhile, Shota searches for his brother, initially unaware of what’s transpiring or that he’s about to be caught in the wake of his brother’s rampage.

I’m not one to be particularly bothered by violence in media but I quickly found that I couldn’t make it all the way through Destruction Babies in one sitting. The films violence is unrelenting, unapologetic and near-constant and is shot in a way that eschews all of the standard film trappings to make it as realistic and downright nasty as possible. There’s little to no background music, very few cuts and little in the way of blood, gore or martial artsy smoothness. All this combines to make the whole thing feel very raw and the sound of fist connecting to flesh and flesh to concrete becomes more shocking than any jump-scare musical sting in a horror film. All of this could be fine if it was attached to a compelling narrative or seemed to have some kind of message but it doesn’t unless you count the concept that violence can beget more violence.

Presumably this is what Shota’s story is supposed to be about, but if there was ever any kind of more subtle message there its either been left on the cutting room floor or has been simply overwhelmed by the orgy of random attacks taking place on-screen. A secondary subplot involving a shoplifting women doesn’t really help matters either as the woman is abused (though thankfully not in the most obvious manor in which it could have been played out) and ultimately subsumed into the terrifying world that Taira and Yuya have brought her into. Even the masses of victims themselves are no more that random bodies to be hit, with not even enough character on show to allow you any kind of emotion regarding what’s happening to them other than the simply horrible concept that they’ve been randomly beaten on the street for no reason, and that it could well have been you in their place.

There’s little more to say here frankly. Destruction Babies just feels incredibly voyeuristic in the worst possible way and has next to nothing to really say about either its subject matter or its characters in order to justify itself. If there is an audience for this then I’m honestly not sure who it is. Watch it if you dare but make sure you have something more sedate queued up to relieve you once the nightmare is over.