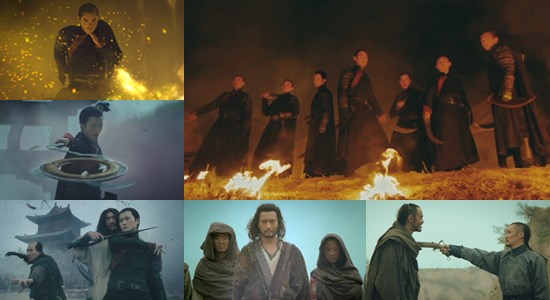 The Guillotines has had a long and rocky road to the screen. First slated for production in 2009 under the steady hands of Dante Lam, the film was then handed over to Teddy Chen when Lam moved onto The Viral Factor. However, production was halted right before shooting as concerns were raised over the script, and Chen too left the project whereupon Andrew Lau (Infernal Affairs) took up the reigns. Although the title bears a superficial resemblance to the classic Jimmy Wang Yu film, The Flying Guillotines, the film has little in common with the earlier work and charts an entirely new story of this covert, elite imperial hit squad.

The titular Guillotines are a small band of elite soldiers whose existence is kept secret and seem to exist in order to do the Emperor’s dirty work. After they successfully capture a major threat to the Emperor - a man known as Wolf, a self-styled prophet, their stock is riding high. However, Wolf manages to dramatically escape en-route to his own execution, taking the only female member of the Guillotines (who also happens to be the daughter of their captain) hostage. The Guillotines will stop at nothing to get their friend back and avenge their honour, but perhaps their age is coming to an end when the allure of Western weaponry with its guns and cannons is becoming ever stronger.

The main selling point of the Guillotines as a squad is their unusual weapon of a frisbee-like missile launched from a sword which attaches itself around the enemy’s neck and decapitates them. In the absence of guns, this is thought to be the ultimate weapon in modern warfare. However, though it can take down anyone within ten paces, guns and cannons can obviously far exceed its range and some in the Qing court would like to see a new rifleman’s brigade replace the (in their opinion) outdated Guillotines. The other important thing about the squad is that they’re completely covert - not to be seen in the sunlight, the members of the Guillotines have no identity, are not permitted to learn how to read or write and in short have no other life or prospects outside of the squad. Aside from the opening battle, the actual weapon is hardly ever used in the rest of the picture, and plot developments lead to the squad being forced to split up in an attempt to save their own lives. Unfortunately, or perhaps fittingly for a group of people who technically don’t exist, none of the Guillotines has any kind of personality and it's often difficult to remember who they are let alone care about their fate.

That is, aside from the protagonist Leng who is perpetually battling a series of conflicting loyalties. Taken in by the Qing court as a child as raised alongside the Emperor almost as a brother with another soldier, Haidu, Leng has been essentially brainwashed for most of his life and wants nothing other than to serve the Qing. After being sent to the Guillotines, he’s come to regard his fellow soldiers as brothers and is fiercely loyal to them. However he also seems to have an intense connection with Wolf, who reawakens long buried childhood memories of his pre-court life as a Han Chinese child. Should he also be defending these people’s rights against the ‘oppressive’ Qing dynasty, or defending the regime which has cared for him since he was a child? The film is much more interested in Leng’s difficult political and familial circumstances than its wuxia stylings might suggest, and is in fact fairly light on traditional action sequences. Though this approach would usually earn praise, it ultimately causes The Guillotines to fall between two stools as its emotional and moral questioning falls flat, and in the end gives way to some not-so subtle propagandising.

In truth, The Guillotines ends up feeling curiously dull, though it does begin to pick up after an extremely slow start. While it often has promise, it never quite ignites into flames and stays on a low boil for much of the film. It also displays some particularly dreadful CGI and a tendency to pander to its 3D roots, which are only a distraction in this 2D version of the film released on DVD. However, having said that it does have its moments and though the script is on the weak side the performances are strong. Neither fish nor fowl, The Guillotines fails to make its mark in a crowded genre, but there are enough interesting moments that fans of Chinese action cinema may find The Guillotines enjoyable enough.

7
A fairly enjoyable yet ultimately bland wuxia tale from Andrew Lau, The Guillotines has its moments but fails to make its mark.
LATEST REVIEWS
Blue Spring