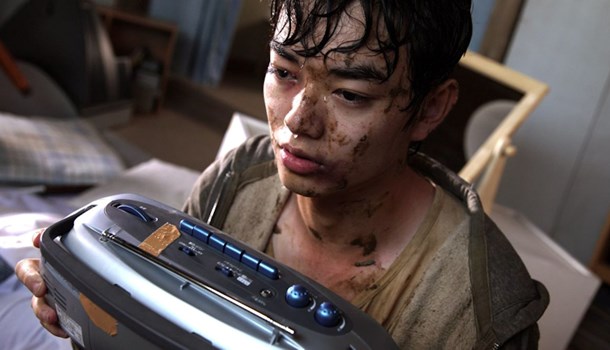 Set soon after the devastating events of the Tōhoku earthquake and Tsunami, Himizu (meaning mole) tells the story of Sumida, a young boy suffering an oppressive lifestyle. Sumida, despite his bests efforts at living a normal life is forced to experience ferocious psychological turmoil Brought on by his violent and abusive father. Sumida is surrounded at home by others who were affected by the tsunami, living in tents and trying to make the most of what little they have. Unfortunately these victims of nature still struggle to protect Sumida from his father. This results in Sumida growing into something truly horrible.

Amidst all the problems Sumida has with his father and general home life (which is the main overlaying plot for the film), things are made worse when the Yakuza come knocking on his door demanding money that his father owes them. Though, as mentioned earlier, Sumida is not the only character who is mentally unstable; enter a schoolmate of Sumida's, Chazawa. Her life is not too different from Sumida's - although she is rich she is constantly reminded by her mother that she'd be better off dead. Her mother even goes to the trouble of constructing a homemade gallows. Sumida on the other hand is poor, but still reminded by his father that the family would be better off if only Sumida had drowned so they could have claimed insurance money.

The film is based on an original manga also named Himizu and created by Minoru Furuya, who may be better known for his work in comedy rather than this dark psychological thriller. The film, directed by Shion Sono and coming in at just over the two hour mark, is a pretty hefty watch and seems incredibly slow at times, although I believe the slow scenes with little to no dialogue really helps add to the tone and intensity of the film and its key scenes. This is one of the many positives to take away from this movie; it really does manage to capture these mentally unstable individuals, whether it be with the use of dialogue or violence. There are moments where sitting on the edge of your seat doesn't quite describe it.

At times some of the characters almost feel like they are acting in comedic fashion - although this is soon justified to a certain level by the characters experiences and ordeals. There's not a single weak link in the cast's roster; they all play their parts no matter how small to how the story unfolds. It's not possible to come away from this film and not think young actor Shota Sometani's portrayel of Sumida to be the real game changer in this film. The story is engaging, the cinematography is great, the musical score is utilised to it's full potential, with some great uses of the well-known masterpiece 'Adagio for Strings', but the acting and direction is where is excels.

I genuinely can't praise this film enough. It just never lets up, it's depressing in the beginning and only gets more so as the film comes to it's climatic close. If you're a fan of great cinema and storytelling, and if you're not afraid of the run time, you'd be a fool to miss this one.

The DVD release of the film comes with a great special features disc, which tends to be few and far between these days. Included on the disc are the expected trailers as well as some deleted scenes. If you're a fan of the film, you'll be happy to know it also includes an hour-long 'making of' feature, and an interview with Japanese actor Denden who plays the Yakuza boss in the film.

8
Brace yourself for some great acting performances and brilliant character development that sits in this somewhat topical story set in Japan. How could you say no?
LATEST REVIEWS
Blue Spring