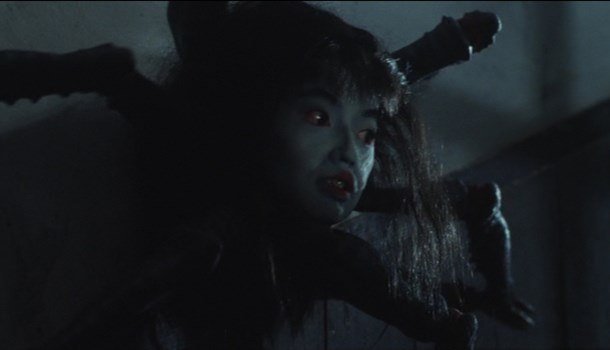 Opening admittance: my only previous attempt to watch Hiruko the Goblin (1991) countless years ago was a failure. The DVD went quickly out of circulation and with it any hope of rewatching the film, so Third Window’s Blu-Ray release provided a timely opportunity to re-evaluate Shinya Tsukamoto’s second film, and his first of only two made for a major studio (at the time of writing, anyway).

Professor Hieda (Kenji Sawada) receives a letter from his brother-in-law, Yabe (Naoto Takenaka), a teacher at an idyllic country school. Yabe has found a burial mound that he believes will prove Hieda’s belief that goblins exist. Yabe, and his student, Tsukishima (Megumi Ueno) investigate first, only for something terrible to happen. Yabe’s son, Masao (Masaki Kudou), and friends start to investigate their disappearance only to find bloody happenings and an apparently crazed janitor, Watanabe (Hideo Murota); finally, Masao meets Hieda and together see if they can piece together what the bloody hell is going on and stop it...

It’s obvious why I struggled with Hiruko the Goblin the first-time around, because it’s very different from Tsukamoto’s previous films, something I’d not been aware of on my first watch. Approaching it again, I was adjusted my expectations accordingly. Though a horror film, it’s more mainstream in its horror trappings than it's contemporary Tetsuo: The Iron Man (1989), or any film Tsukamoto would make subsequently; it also has lashings of humour, sometimes absurdist, sometimes closer to outrageous on the comedy spectrum, and not unlike The Evil Dead in its approach. Tsukamoto’s films are never without humour but Hiruko the Goblin wears it far more plainly on its sleeve. Intriguingly, in the interview with Tsukamoto bundled on the disc, he describes the film as being one half of his cinematic personality, with Tetsuo being the other, but the audience resonating more roundly with Tetsuo, he carried on with that style. I’ll be honest, I’m glad he did because watching Hiruko the Goblin again, and this time beginning to end, yes, I enjoyed the film but it’s not unique in the way his later films are. Even his other film for a major studio, Gemini, is much more firmly a "Tsukamoto movie".

That said there’s a lot to enjoy in Hiruko the Goblin and a lot that is familiar to those who know Tsukamoto’s films. As Hieda and Masao traverse the school, stalking (and being stalked) by the goblin Hiruko, we’re treated to classic kinetic Tsukamoto: point of view shots careening through school corridors, scrambling up walls, across ceilings, at a pace designed to create a sense of horrific following, chasing; unhuman, otherworldly unspeakable awfulness and forever one claw scraping moment away from slamming into someone’s path and bloody ruin. As Tsukamoto often does, he counterpoints these moments with curiously lyrical calm, such as the face of Tsukishima, as her singing face floats in the water (only for him to turn it around again). So much of Tsukamoto’s sensibilities are really on point, but where the changes are rung, these are equally blatant. Tsukamoto is not particularly known for holding back on screen and is capable of creating horrific images and shocking emotional situations, but I feel his skill is in the brutal subtlety with which he evokes and explores what is terrible, carrying with it an emotional honesty, something that can lead into the visuals: just think of the boxer’s ruined face after his bout in the ring in Tokyo Fist, it’s visually brutal but seems emotionally real. This type of brutal-honesty is missing from Hiruko the Goblin, instead the blood will gush in a more conventional horror style and our protagonists are likely to run away screaming campily. 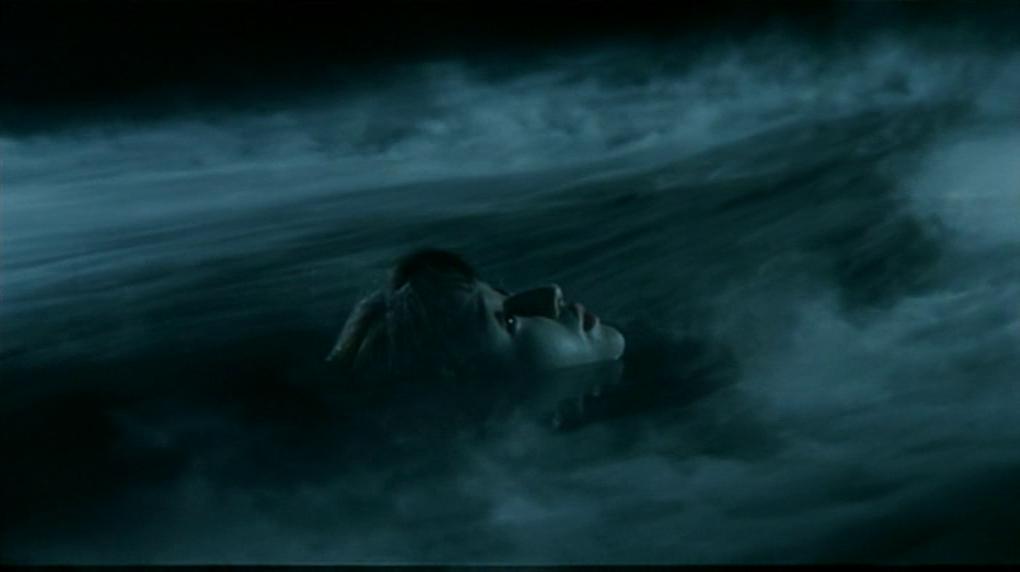 The calm is perhaps not quite as it seems?

As yes, there is more than a little camp to the humour, and the film itself brings forth comparisons to other directors’ work more often than you would expect with an apparent iconoclast like Tsukamoto. John Carpenter’s The Thing is brought distinctly to mind with the goblin-victim-face-on-legs abominations that chase our protagonists; other creatures evoke Alien, with their sleek monstrousness. Moreover, the structure of the narrative seems more conventional and that’s no surprise when you hear Tsukamoto talking about how he was channelling some of his American influences, especially Spielberg, though if this is Tsukamoto as Spielberg it’s definitely an unusual take (OK, some of the bicycling might be aping ET); though you can see how Tsukamoto is trying to make a more conventionally popular yet creepy horror-comedy film. In that sense I think that he succeeds pretty well, and there are some amusing touches, such as Hieda’s homemade goblin detection device and weapons that really are kitchen implements taped together with additional oddments plastered on to make them work (arguably this is little different from Tetsuo’s technology cobbled together look, just played more for laughs); also, when we burrow into the barrow it is a delightful grotesquery and where you can imagine in elements Tsukamoto may be contemplating low-budget Indiana Jones in the exploration of ruins best forgotten.

Two things though I especially missed in the film were Chu Ishikawa’s music and Tsukamoto acting in the film (intriguingly he’s absent from his other major studio film, Gemini). Instead of one of long-time collaborator Ishikawa’s powerful, and powerfully fitting scores, there is forgettable synth soundtrack that is very much of the time. In Tsukamoto’s defence he describes not being aware how varied Ishikawa could be when it came to getting someone to score the film; something he’d learn while making the second Tetsuo film. On the acting side, I always feel Tsukamoto is underrated as an actor, though it’s hard to see where he would have fitted as for the most part the film really centres on Kenji Sawada as Hieda and Masaki Kudou as Masao. Tsukamoto apparently had to needle singer and at the time stage actor, Sawada, to take the role, who didn’t want to be in a horror film. A year later Sawada would arguably get a meatier lead role in Seijun Suzuki’s final film of his Taisho trilogy, Yumeji.

Despite some moments exploring his past, the role of Hieda is a more comedic-horror-bumbling-screaming one and to be honest Sawada does seem to be having a lot of fun and carries the film well. But it’s not one of the great cinematic parts, understandable because like a lot of horror films, this feels like a movie where the director and the effects crew are the stars. Lucky then that Masaki Kudou’s Masao has a back full of faces to make his performance memorable, though actually the teenager does a credible job when necessarily. More fun is Hideo Murota’s scythe-wielding janitor, Watanabe, who you know is not quite what he seems but with a face you’ve seen in a thousand films (seemingly literally). He comes across as so relaxed that he seems oblivious to the fact he's acting in a film; though really Megumi Ueno likely had the most fun of all as Tsukishima, for reasons that are obvious if you watch the film. Then again, when it comes to Tsukishima, the effects team, including the stop motion folk, really get kudos for creating an horrific creature that really fits with the tone of the film.

If not classic Tsukamoto it’s certainly better than I remember it. If that sounds like damning by faint praise, it’s not meant to be, but the style of filmmaking that Tsukamoto often employs is not one that I respond to as well as the one he’d run with. Yes, there are elements I enjoyed a lot and the ending manages to hit a pleasingly absurdist-grotesque note, but the more overt blood-splattering and running through corridors is more mainstream and less interesting than the style employed in Tetsuo, or the emotional intensity he'd show in A Snake of June. If I'm honest, I am glad Hiruko the Goblin had not been a bigger success at the time, and audiences latched onto Tetsuo, because if Tsukamoto had instead picked up the Hiruko style of filmmaking, I’m not convinced he would have had the same impact on cinema. For while there are signature moments, it’s nowhere near as uniquely impactful as a piece of filmmaking as his other work, but a fascinating glimpse into the Tsukamoto that could have been, and a fine schlocky-absurdist-horror-comedy it is too.