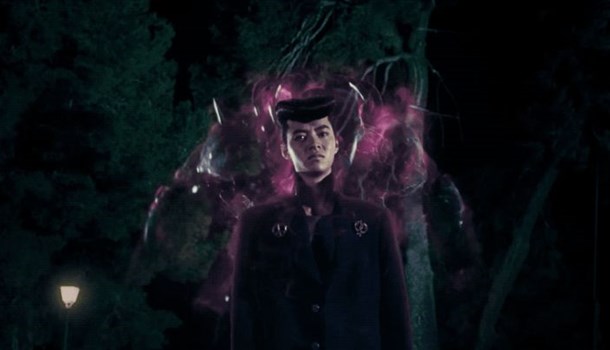 Takashi Miike is nothing if not versatile. The man has made well over 100 films in virtually every genre known to man and is responsible for some of the most bizarre and over the top cinema experiences on the planet. Finding out he would be one to direct the live action version of Hirohiko Araki's bizarre and over the top manga it seemed to make so much sense I imagine the producers of this movie version only had Miike's name on the shortlist. With that said live action manga adaptations have a very spotty histories in both East and West, so can Miike pull off what has flummoxed so many other directors?

Koichi Hirose is starting his first day in a new school after moving to the small town of Morioh when he runs afoul of some bullies, lucky for him his classmate Josuke (JoJo) Higashikata is passing by rocking the silliest hairdo this side of Boris Johnston, a factor the bullies feel inclined to comment on – big mistake. JoJo slaps the lot of them down seemingly without moving a muscle, impressing Koichi who then tries his hardest to befriend JoJo (or possibly more, the film is very coy on that front) little knowing that some bizarre murders are about to take place in this small town with his new potential bestie finding himself at the heart of the matter. Add to that a stranger in town wanting to discuss JoJo's eventually revealed strange powers and familial ties, a pair of brothers who may or may not be connected to the killings and we have a movie filled to the brim with characters and incident. So does it crumble under the weight of expectation and content? Happily – no. JoJo fans can breath easy: Miike has done their source material proud and made a very entertaining film to boot.

These live action manga adaptations have become prevalent and much more ambitious in recent years with most, sadly, falling flat in execution. My viewing of this came in the middle of a bit of a binge on live action takes of popular manga so I felt in the zone to judge this after sitting through the great (Tokyo Ghoul, 20th Century Boys), the good-ish (Fullmetal Alchemist) and the shoot-me-in-the-head-now-to-end-this-pain (Attack on Titan, Black Butler). They key ingredient to the stronger adaptations seems to be a director who not only has a firm grasp of the property but is able to refine down and adjust the story to make an entertaining movie that stands alone as we have here. Miike and his screenwriters have carefully broken down the mammoth arc they had to work with and so that it not only fits into a manageable running time but is also a satisfying viewing experience. This tactic works for the most part with the exception a couple of elements one part of the ending that comes out of the blue and seems only to be designed to get rid of the main baddie so JoJo doesn’t have to dirty his hands and a some other small pieces of set up clearly there for future sequels.

The cast themselves, although not very well developed, are well defined with each having a distinctive personality that the script efficiently establishes. JoJo is likeable enough hero with a strict moral code he won't break and a surprising amount of brains for the hero of this type of film. Kento Yamazaki gives a solid if unremarkable performance as our hero. The rest of the cast are good too with the strongest performances coming from Takayuki Yamada as crazed killer Anjuro Katagiri and the impossibly gorgeous Nana Komatsu as - clearly hiding something - Yukako Yamagishi. Miike also keeps his actors on a short leash not encouraging the OTT histronics present in other works of this type despite the silliness of the story. He also does a good job with the action scenes, staging them well and allowing the fun stuff to play out on screen rather than through the current Hollywood trend of shaky cam. Particularly enjoyable is the extended showdown in the villain's hideout that keeps cranking up the crazy as is expected of this series.

This DVD only release looks as good as can be expected with a decent transfer. The film's digital effects look fine in the format and although of mixed quality are imaginative and faithful to the source material.

For fans of JoJo this is a nice companion piece to the anime version and for anyone interested in the franchise this is a decent entry point to see if the franchises type of insanity appeals. With that said this version has been very toned down with a lot of the macho posing and over the top nonsense replaced with a 'realer' world feel. The only exception being the hair pieces the male cast members are forced to wear, now those are truly bizarre.

7
A fun, well made, adaption of the maddest manga known to man
LATEST REVIEWS