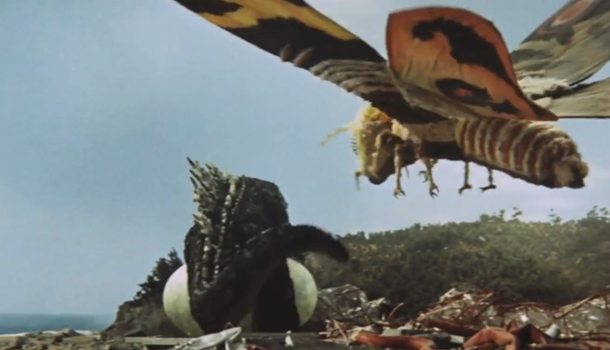 Mothra vs. Godzilla (1964) - hmm, now that title seems strangely redolent of the previous film, just substituting Mothra for King Kong. Not that I want to suggest any laziness on the part of the screenwriters.

But what’s in a title? Well that depends on whether or not you compares it with the similarly titled previous film in the series, which was unutterable garbage – or at least as it was released by Criterion in this bookset.

Thankfully, Mothra vs. Godzilla (MvsG) is no Americanised messed-up cut and so is almost impossible to compare with King Kong vs. Godzilla. In short: it blew away the cobwebs of that shudderingly miserable film. (Have I gone over the top with the slating? Sorry, no, almost no slating is enough!)

Like Mothra (1961) before it, Ishiro Honda is back behind the camera. Reporter, Ichiro and photographer Junko, are sent to report on a land reclamation project devastated by a typhoon. As Junko’s artistic sensibilities causes her to photograph a mysterious iridescent object, Ichiro is unimpressed and wants proper pictures! And proper pictures he’ll get, as a huge egg is then seen floating out at sea! Rescued by local fishermen, they sell the egg to Happy Industries, who plan to hatch it in an amusement park they will build around it. Capitalism for everyone!

But, from Infant Island, the home of Mothra, come the miniature fairy twins to ask for the egg's return, for it is the egg of Mothra! Along with Professor Miura, Ichiro and Junko agree to help the fairy princesses, though sadly to no avail. But wait…

Gone is the over the top slapstick humour visible in some of the performances (and the dreadful American dub) of KKvsG. MvsG is a much slyer nod and a wink of a film. It is beautifully aware of its absurdity and is playful with it – fully embracing the ludicrousness of the plotting while still managing elements of Godzilla’s moe serious messaging. When singing duo, The Peanuts, return as the fairy princesses, their disembodied harmonic voices requesting the egg’s return, the sleazy businessmen (one who reeks of yakuza and is bankrolling the amusement park), the film turns the story of Mothra on its head. No longer are they easily caught and exploited exotic act, no, now they seem imbued with an almost magical capability to elude entrapment as the two men pounce across the room, attempting to catch them with their coats. All this is faintly absurd, yet Honda manages to create an almost dreamlike feel to the scene, something that continues as the fairy princesses reveal themselves once more, this time to the more benevolent reporter, photographer and professor.

Immediately, unlike the less successful but decent Godzilla Raids Again, you become aware of Honda’s greater skill with coaxing decent performances from some quite average actors; his capacity for pacing and structuring a story, as well as visual nous, raises MvsG up from being a potentially decent sequels to well above average.

Like Mothra and Godzilla before it, Honda continues with the virtue of expectation, not just crashing into battle after battle so that it all becomes rote, instead building up tension and a mainly coherent if mildly bonkers story. Admittedly there are some baffling elements, one wonders if perhaps due to key scenes being lost on the cutting room floor. Quite what the connection is between the iridescent object Junko tries to photograph and the egg appearing is unclear, though the film implies a connection; also Godzilla just appears out of the ground. Quite what calls Godzilla from this subterranean bolthole is never fully clear but in the end you don’t really care. I think you don’t much care because Honda continuously humanises the story, always returning to the human impact of atomic power and weapons. It’s no surprise that the fairy princesses describe Infant Island as being desolate due to atomic tests yet its natives being a profoundly peace loving people, something that will be played out later in the story.

And of course Godzilla isn’t really the villain of the piece, nor Mothra, who if anything starts the trend of the monster as sympathetic entity. No, it’s the avaricious businessmen who run or back Happy Enterprises in their attempt to monetise Mothra’s egg that are the true monsters. Damn the risk, damn the morals. The face of Happy Enterprises is a worming sycophant of a creature and the money man behind him a scenery chewing exploiter. These are the men that cause harm to society not Godzilla; OK, Godzilla does a shed load of rampaging damage, but is more a force of nature. The other villain is of course faceless, the one that allows the use of atomic violence against humans and nature as both will return to haunt humanity.

As the film progresses to the monstrous showdown, Honda keeps the story simmering and with a certain visual flair finds a more inventive ways to film the otherwise prosaic elements of the action. I found something in how the Japanese Self-Defence Force take action against Godzilla, here more as a ruse than an effective counter-measure, to be less Let’s Fire Shit At This Monster And Hope Though We Know It’s Ineffective And We’ll All Die than usual. It brought to mind Evangelion. The framing of the images, the sense of creating a futile line of defence, seem to be echoed in Anno’s seminal series. And I do wonder if films like Mothra vs. Godzilla influenced him because of how Honda manages to balance epic battles between apparently indestructible forces with the fragile nature of humanity. Both Anno and Honda have a knack for recognising how to humanise stories and also revel in destruction while understanding it’s not just EXPLOSIONS! for the sake of it. Spectacle without emotion is mostly empty and pointless.

Speaking of which, the special effects are a curious mix of excellent and decidedly average. The model/suitmation work is, like previous films, surprisingly good. But the matt shots, bluescreened actors against dramatic action are not very convincing. Thankfully the latter are few and far between. Also Godzilla’s design seems (especially in the face) to be a little bit "big cat" like and, again to reference Anno, reminded me of the monster in Shin Godzilla, the whole goggly eyedness of it. Even if not an influence, Godzilla’s design here had more impact than in any film since the original.

It helps that Honda and the effects by Eiji Tsuburaya really manage to wring the most of what they have to offer. Gone is the amateur wrestling of Godzilla Raids Again, and instead there’s a real immediacy to the kaiju action, conveying a realistic urgency of a parent fighting for their egg. The snappiness of the editing and the close-ups, similar to Godzilla, give a sense of genuine violence to both monsters as well as a genuine sense of desperation to survive and/or protect. The visceral nature of the action means it transcends any questions regarding whether they are a bit dated or not. (And of course they are.)

One thing I realised watching the film and writing this is how I am not really reviewing and rating a film in the normal sense but rather a film in the context of the original Godzilla.

Godzilla earns a ten because it’s a genuinely excellent film but also because it stands as the benchmark that others are set against. Can another film be as good? The ultimate answer is very likely not, but of the three sequels, Mothra vs. Godzilla comes closest. It highlights all of Honda’s strengths as a director, even if it never manages the black and white grittiness of the original. Curiously, and as someone who loves black and white, colour I think has the surprising effect of reducing one’s sense of reality in these films and yet Honda manages to make a surprisingly believable film.

Believable why? Because this should be so utterly ludicrous, at times even surreal if not just downright stupid. Those repeating elements of Mothra, like The Peanuts singing to Mothra should be eye-rollingly dreadful, but somehow Honda evokes a mood that makes it seem at once magical and real. It makes me wonder if perhaps Honda is the directorial equivalent of Peter Cushing. Growing up watching some late 60's, early 70's British horror films at midnight on Friday night where Peter Cushing will be in yet another film with a plot that makes no sense - and yet he’s so utterly convincing that you just accept what is happening as real. Hedgehogs are taking over the world using their spiny malice? Cushing tells me, so I believe it. Equally, how Honda marries the visceral monster fights with the human stories and embraces the more utterly bonkers elements, he creates such an unlikely, well-balanced and enjoyable film that you just accept it all, regardless of the plot holes and average actors on display. Let’s hope the bookset continues in this vein. 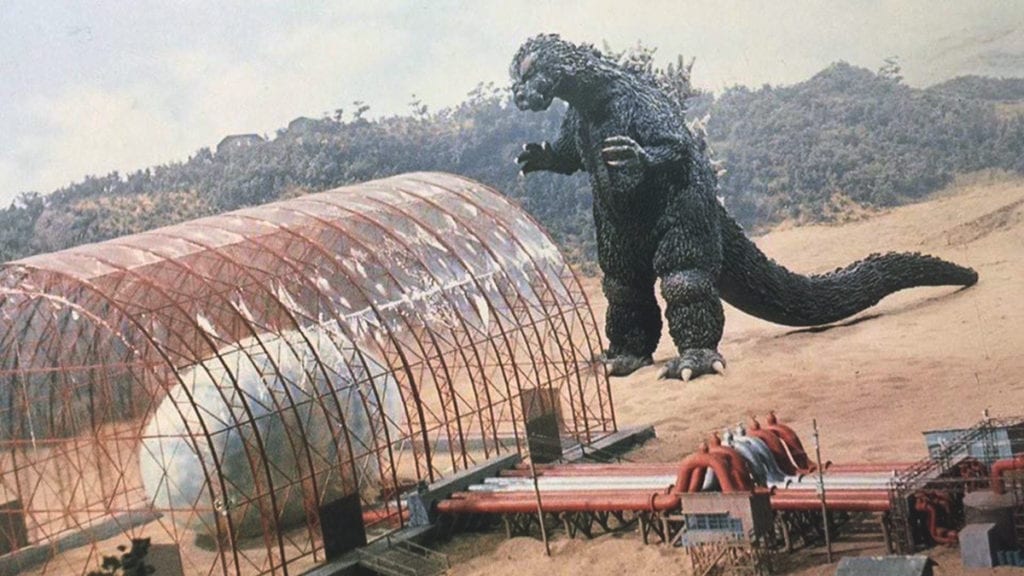 8
A return to Godzilla as it should be, with added Mothra. Who could ask for more?
LATEST REVIEWS