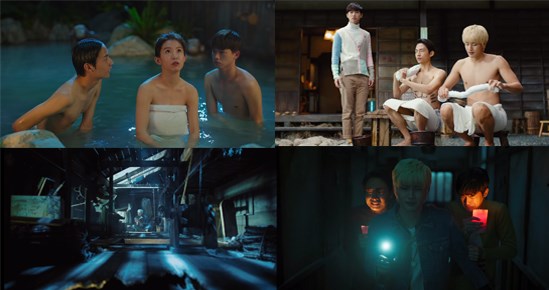 I am not really interested in Chinese media so the detail that made me stop and look again at Secrets in the Hot Spring while scrolling through the Asian Movies category on Netflix was not its title, cast, or crew, but rather its age rating. Secrets in the Hot Spring is rated PG… wait, really? Only PG? Anime teaches us that hot springs and bath-houses are the steamy sweaty sultry slippery soapy shiny abodes of fanservice, where glistening girlflesh sparkles and scintillates and slides up against each other in slinky skinship. In short, a hot spring is normally something that gets a big angry red circle slapped on your show by the BBFC, so if a movie about hot springs somehow managed to contrive a family-friendly yellow-badged PG rating then it must be a hidden gem of unappreciated directorial genius, a masterclass of ingenious and delicate editing around the bathing bits that would make Alfred Hitchcock look like a kid with a camcorder. At the very least, Secrets in the Hot Spring won awards for Best Supporting Actor and Best Makeup & Costume Design at the Taipei Film Festival in 2019 and while that’s not quite the Palme d’Or at Cannes it’s still at least something to indicate that this film has distinguishing features to lift its head up above the herd. Secrets in the Hot Spring is also a Taiwanese movie, so it does suggest that there might be a bit more hands-on indie character to the film rather than the garish over-produced frippery of a mainland mainstream production. Secrets in the Hot Spring seems to have enough points of interests then to attract a closer look - are there hidden depths within this pool, or is its temperature only lukewarm?

Hsiao, usually called “Blondie” because of his rebellious peroxided hair, is a feckless yoof mooching through life with no real drive – a perennial drop-out currently on his third high-school and constantly getting into fights, while his mobile telephone is an angry hornet constantly buzzing with messages berating him from both his long-suffering uncle and stroppy grandparents. Troubles are piling up on top of Blondie – he is fired from yet another in a string of unsuccessful part-time jobs (dressed as Child’s Play’s Chuckie in a fairground haunted house) and becomes the butt of contempt of his new school when his latest fight with the school bullies doesn’t make him a hero but only the laughing stock when he finds out that the kid he’s rescued is just his effete classmate. Hsiao would much rather just sleep all day and sulk through it, but he gets another opportunity to escape his woes when he finally gets a call that he can’t just put to voicemail: his grandfather has died and so it’s time for Hsiao to take over the family business and inherit their hot spring hotel, which he hasn’t returned to in years. Blondie returns home – with two other unwanted hangers-on, classmates trying to escape the bullies hoping they can lie low at the hotel until their tormenters get bored – only to find that he’s been tricked: his grandfather is very much alive and just wants an extra hand.

He needs it, too, because when grandad pops his clogs for real Hsiao won’t exactly be inheriting the Ritz. The “00 Hotel” gets its name for zero stars as it’s is a shabby, run-down hovel – the rooms are filthy, the furniture is falling apart, the service is as surly as Blondie’s own angsty teenage pout, and scum is floating in the hot spring. Even the front door has fallen off its runners and won’t open properly, trapping hapless guests inside – how does that old song go? You can check out any time you like, but you can never leave! All in all it’s a pretty miserable tourist trap, but if the hotel is old it is also has history. Could the hotel have more guests than just those who’ve booked in for the night (only one – people rarely stick it for a second) and is the creaking of its old timbers be overlaying the spooky wails of ghosts?

Secrets in the Hot Spring is billed as a comedy but it doesn’t start off as one. The opening credits taking place along a scene of a hanging, which while it’s clearly intended to establish the supernatural swirling around the hotel with scary ghosts, is perhaps a bit too stark a thing to be confronted by right away for what is supposed to be family-friendly film. The first reel of the movie detailing Blondie’s travails in the city are also probably a bit off-colour for Western audiences. Hsiao attracts trouble because he ends up saving a campy classmate, who’s mocked as the “Princess” (in a dream sequence which pictures the cast in a wuxia period drama, he’s even dressed as one) and goes around school with “Faggot” scrawled on his back, the subtitles helpfully inform us. There’s a steady stream of gay jokes throughout the movie (he runs from spooky noises and falls on his knees in front of Hsiao with his head at crotch height; his friend cuts his finger and he offers to suck it clean, provoking horror; he runs from another ghost and his towel falls off as he leaps at Hsiao, making it look like they’re in a clinch), and while I wouldn’t call it offensive – turnabout is fair play and a lot of these jokes spin into running or call-back gags where the other boys succumb to the same things they mock Princess for, such as girly screams – but by our standards it is certainly dated.

There are still good things in the school segment though – despite appearances the teacher isn’t a milksop and even gives Blondie some sass (“everyone cherish your time with him, he won’t be here long”); a short segment detailing how the rumour-mill spreads like wildfire around Blondie is snappy and well-directed; and Hsiao himself is well-drawn, he isn’t presented as a infeasibly heroic white knight riding to the rescue of the oppressed, he saves the class dweebs pretty much by accident and is visibly irritated that they’ve turned into his hangers-on. Furthermore, once the crew leave the school behind and arrive at the hotel, things do start picking up. Back on civvie street I work in the travel industry, and the introduction of the hotel is downright hilarious in its pointed observation. Hsiao’s grandparents are consummate masters of the hard sell (an angry customer demands a refund: grandad, acting doddery, coughs consumptively over the money he’s counting out so the guest leaves it behind), and extra fees to use absolutely everything, with everything else that’s not nailed down being tagged with swingeing fines for loss or damage is another entertaining grift. One skit where guests are told that they can’t ride the coin-operated mechanical horse but can just watch it and enjoy its movement had me laughing out loud for its stupendously brazen cheapness. The “old house” behind the hotel is built up dramatically as though it’s the Bates Mother’s house with its antique heavy iron key… but when they head out back it’s barely more than a garden shed. I am someone who’s trudged through of a score of mind-numbingly boring and completely identical agricultural museums in various sleepy Alpine villages who’ve not seen a touch of actual history in the past millennium, so the similarly desperately puffed-up business of the segment on the “Great Hotel Fire” where the assemblage of historic artefacts amounts to one charred wisp of straw, cut me to the quick… it’s all funny ‘cause it’s true!

Gradually Hsiao and the boys become convinced that the hotel is haunted – or even that the grandparents are already dead and are actually zombies – and the movie changes gears again from a light Fawlty Towers pastiche into goofy slapstick as they run from things that go bump in the night. Again, this isn’t a bad segment – the hotel is actually a substantial and detailed set that works well with the various trips, traps and tumbles, and while the exteriors are very obviously on a sound stage the interiors are so comprehensive and elegantly fit together that you’re even taken on a tour of the hotel in the ending credits. This segment is strong, but it also illustrates what’s held this movie back from wider success with incorrect marketing. Looking elsewhere on the internet, there seems to be widespread dissatisfaction with Secrets in the Hot Spring as a bad horror movie – but it’s not a horror movie and was never intended to be. Secrets in the Hot Spring is no more horror than Scooby Doo is horror! That bafflingly out-of-place dramatic opening scene – which is never referred to again anywhere else in the movie – really sets the wrong expectations. It’s compounded by a well-intentioned but misguided subplot about Hsiao working through his lingering trauma over his parents’ deaths: while it does result in a pleasant resolution at the end of the movie as Blondie fondly remembers all the happy times and realises his departed folks’ wishes, a sequence in the middle of the movie absolutely sinks to the bottom and spoils the family-accessible atmosphere again with a tragic flashback, including Hsiao standing over his drowned mother’s body, which is completely tone-deaf and at odds with the entire movie surrounding it and entirely unnecessary, especially when in an earlier scene Hsiao’s background was established as he watches an old camcorder recording of his parents, making the grimmer flashback totally gratuitous.

It’s a shame, because it makes Secrets in the Hot Spring something of a curate’s egg – good in parts, but the bad bits still risk overwhelming the whole. There’s a lot to like and if it had stuck to the Halloweeny haunted house comedy then it would have done decently – but those poor directorial choices of dissonant scenes are reasonably self-contained enough that they can be excised with judicious use of the fast-forward button and you still can have a good time.

Oh, I almost forgot – how do you keep a movie about a hot spring with a PG rating? Turns out it’s not that hard, really, just make sure that the towels stay stuck on with superglue!

Audio in Mandarin only. Subtitles in English, Spanish, Portugese, and Simplified/Traditional Chinese.

6
Get through the first ten minutes to let it find its feet and there’s a gently amusing haunted house caper to tumble through.