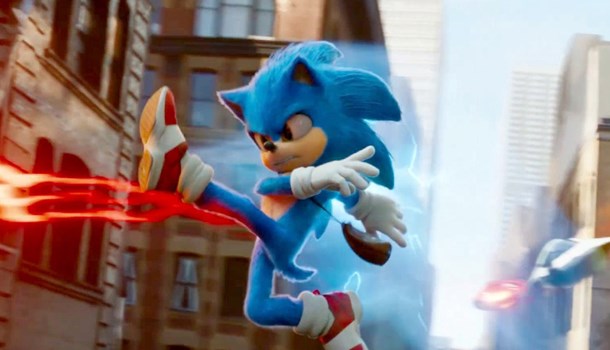 Sonic the Hedgehog has done great business at the box office, and I finally managed to get out long enough to watch the blue blur in action - and my word, it's actually very good!

With Sonic on the run to hide his mysterious power (from what looks like an army of Echidnas) he settles on Earth in the sleepy town of Green Hills. Becoming something of an urban myth, he spends 10 years in lonely exile before events overtake him and he's on the run from the governments insane technical genius, Dr Robotnik.

In yet another hi-energy and rambunctious role, Jim Carrey absolutely steals every scene he's in. Nobody gurns and chews scenery like this man, a genuine human cartoon with a zany lust for self-aggrandisement - it's a pleasure to see him back on form. He seems to be enjoying the role too, and his recent social media posts suggest a happier man than we've seen in recent years. I'm glad he has his verve back, he's an absolute legend and I adore him in this film.

I was equally pleased to see that James Marsden gets a few well written zingers to throw against Sonic's nemesis too, there's a chemistry between the two on screen that's delightful, almost like a squabbling couple, and arguably the pair have more spark than Marsden does with his wife played by Tika Sumpter.

The film itself is a svelte 100 minutes, allowing enough time to develop its (admittedly thin) plot and allow each scene to breathe, but short enough to keep little ones from squirming in their seats. The writing keeps the jokes, mostly centered around Sonic's speed powers, nimble and landing more often than not. Robotnik's robot minions lack any personality of their own, but I liked the mecha design in the movie and the glowing red eye of each device exuded enough cartoon menace to make the threat seem palpable despite the main character being CGI.

All the nods you would expect to Sonic's video game roots are in place, from the music to the Easter eggs dotted around the film (loved the rings forming around the Paramount logo!) to deep cuts such as crazy Carl (the only towns-person to believe the "Blue Devil" exists) waving around an artists rendition based on the infamous Sanic fan art.

The film works well overall as a fun, quirky adventure that has some genuine laugh-out-loud moments, entertaining action sequences and a main character that stays just this side of charming. There's a wit and verve to the direction too, and Jeffrey Fowler (an Oscar Nominee for his animation work) deserves a lot of credit for the film considering it's his first motion picture - incredible! It's a small miracle that this actually worked so well, but Marsden and Carrey make the movie under Fowler's sure hand, so all credit to them for caring enough to put the work in. There's one more star of course, and that's Sonic himself - though it was a close call as we'll discuss.

Much was made last year of the fan reaction of the initial Sonic design (which was beyond awful), and the studio's decision to delay the film and rework the CGI to meet customer demand. Fans of course were delighted, as was Sonic co-creator Yuji Naka, who praised fans for what Henry Cavill would describe as "passion". Outlets such as the BBC have published condescending articles over fan entitlement, but in this I stand firmly with fans (read: customers that pay for the product) and the creator - the redesign has made all the difference, and this is a wonderful depiction of the iconic 90's video game character. Full of life, energy and humour, Sonic is an engaging and sympathetic protagonist, one who looks every inch as we remember him. There's a real sense of community about this film, and it really is joyful.

At time of writing, Sonic the Movie has grossed just shy of $300 million worldwide, outgunning Birds of Prey by $100 million - perhaps a hint to Hollywood that the customer is more often right than wrong when you want to take their money. For a video game movie about a blue hedgehog of all things to outperform one of DC's hottest breakout characters featuring major celebrities like Margot Robbie and Ewan McGregor... well it's something I never thought I'd see, and I bet neither production did either.

That makes a little blue alien hedgehog from another planet the second most surprising thing I've seen this year!

8
It doesn't break any barriers, but it has a likeable lead, a wonderful villain and solid supporting cast headed by Marsden. Better than it has any right to be, this is one for kids and adults alike.