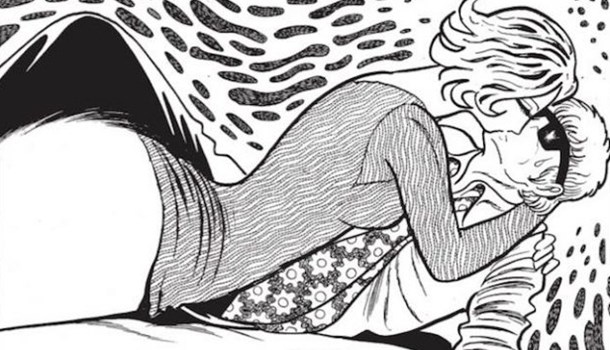 When I started writing manga reviews for UK Anime back in 2005, if you had told me that a manga company would bring out a manga title by the pure power of crowd-sourcing I would have wondered what you were drinking – and would have promptly ordered a double of it.  Yet, in 2011 American manga company DMP (Digital Manga Publishing) set out to achieve just that - and now I hold the result of that project in my hands.

First and foremost, Osamu Tezuka's Barbara as a manga shows itself to be a work of its time – when published in 1973 Japan was at its height both as a technological innovatior and economic expansionist, while still enjoying the euphoria of a culture addicted to the next big thrill, be it drugs, art, sex or social and political revolution - and yet at this time it was clear that the party was coming to an end as political corruption was rife, and the Oil Crisis of 1973 causing the worst depression, and increase in price inflation, in Japan's history, only beaten by the bubble crash of 1989.

Into this mix we are introduced to Yosuke Mikura, a relatively famous author and social darling with offers both political and matrimonial landing on his lap, all of which he casually casts aside, confident with his own talent and hubris. That is, until the day that he find a young vagrant and the titular character of the book - Barbara, whose otherwise foul-mouthed, drink-fuelled surly attitude towards Yosuke and his talents hide a gift that is both an unexpected boon to him and also a curse that will destroy him utterly....

In its execution, this work shows the classic signs of a Tezuka manga from the artwork to pacing to the script, with artist and philosophical quotes aplenty throughout the series. However, don't be fooled by this - even when compared to many of his other more adult works like supernatural series “Ode to Kirihito” and the murder mystery “Mu”, Barbara attempts to travel in directions that are darker still, dabbling into themes of the occult, physical abuse, drug taking and psychosis as we discover that Youske's own personal demons and.. "interests".. leave him to be less of a hero of this piece.

Indeed, as we watch Yosuke take for granted the good fortune that Barbara's presence seems to give to him, I couldn’t help but be reminded of the endless line of talent show “celebrities” all desperate to reap as much as possible from their less than hard-earned fame. It could also be seen in another sense as an analogy of drug addiction itself, with Yosuke's obsessive desire for both Barbara and fame resulting in his eventual spiral towards inevitable loss and self-destruction.

One major issue with Barbara's story is the pacing of the series, which left me disconnected at times - while this could be attributed to the series being released episodically by the manga magazine “Big Comic”, the episodes themselves felt at best only loosely connected. Indeed some sections - such as chapter 5 (“The Demon on the Dune”) where Youske returns to an island where he met his first love in a younger time but which turns out to be much, much more - felt more like a stand-alone short story in format that had been wedged into the series.

As a result this work could be seen as Osamu Tezuka's attempt to both compete with the rising Gekiga movement (whose efforts that were focused on violence and sex scenes gave us series like Kazua Koike's samurai series Lone Wolf and Cub), and also his attempt to remain relevant as a mangaka at a time when, despite the fact that he is known now as “the godfather of manga”, by the 70s he was struggling to remain relevant to an audience that was increasingly looking for darker and edgier works to whet their palates.

Indeed it could be argued that, while trying to appeal to the more adult readership, it feels as if Tezuka has deliberately handicapped himself - his plots and characters feel almost like those from a pantomime, proving to be one-dimensional in their personalities and backgrounds.  It felt like Tezuka was hesitant to take the story too far into the darkness that others (like Kazua Koike) were wholesale plunging into for fear of alienating fans of his more light-hearted and child-friendly series.

However, one thing is clear here – Barbara is by far one of Tezuka's most dark and unsettling titles, and you should not go into it looking for the comedy and light-heartedness that is symbolic of many of his other works.

7
While undeniably an essential buy for any Tezuka fan, this by no means represents one of his better works.