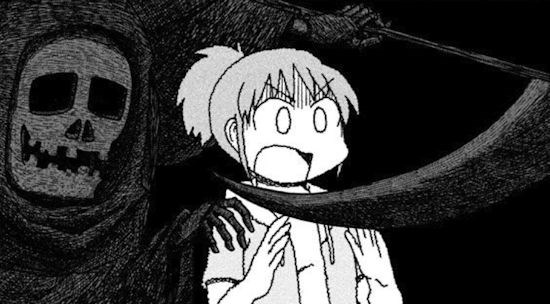 Keiichi Arawi is back with a new slapstick comedy manga in the same vein as his previous work, Nichijou. For those unfamiliar, Nichijou was a bizarre manga that had a varied cast and not much in the way of a narrative - think Seinfeld in school with more absurd and random stuff happening, and you're about there.

City has a little more focus. It's the tale of Midori Nagimo, a penniless student constantly on the run from her debts. Chaos usually follows in her wake, and first impressions are more confusing than endearing. Nagumo is not a particularly likeable character - she constantly begs money from her best friend Niikura, steals random objects and, at the end of chapter one, ends up working part-time at a restaurant. So much happens in one chapter that it's actually quite hard to take in - it's like watching someone play chess at a move a second. Disorienting and hard to follow.

However, the domino effect is actually quite fun to follow, as one event bumps into another, setting off a narrative arc that is as anarchic as it is confusing. Honestly, you'll either fall for the comedy stylings in this book or you won't, it's a very marmite series. I was initially a bit put off by the randomness and occasionally irritating script, but by book's end I was more on board with the series, and so I'm actually intrigued by a further volume rather than staunchly against it. Generally speaking, I like my comedy to make sense, but there's a drop of the absurd in an IT Crowd/Father Ted kind of way here, and once you warm to the cast it's an enjoyable read, if not essential.

The artwork is unmistakably Arawi - weird looking animals, almost Chibi characters and sporadic moments of movement coupled with a sense of the surreal makes the book stand out - even the cover, with it's colourful, rough style is distinctive on the shelf. Refined it is not.

So if you're a fan of random humour, overacting and the ridiculous, this is for you. Raise a glass to Arawi-san and drink deeply from his bizarre brand of narrative. The rest of you can easily be forgiven for shaking your heads and walking on by.

Hard to score, so +2 if you like the ridiculous, -2 if you don't. But the best way to know for sure is to try it for yourself first.

7
Anarchic, bizarre storytelling which starts with a pebble thrown into the pond with chaos rippling ever outward. An acquired taste for sure, but nectar to fans of the style.