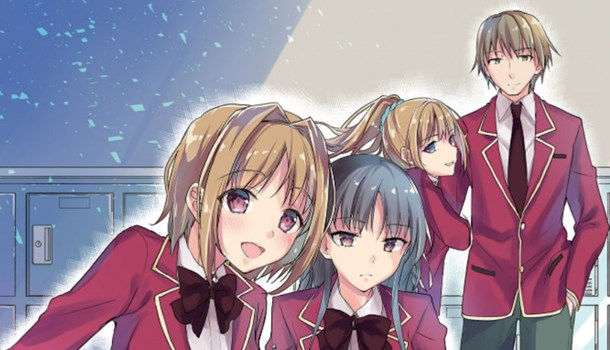 The Tokyo Metropolitan Advanced Nurturing High School is a huge academy for students looking to attend the best universities and attain the highest status in Japanese society. Covering 500 acres and comprising the very best shops and facilities, entry is a dream come true for any student with the grades to get in. But not all is as it seems, and the competition is fierce - as the book says, the only evil is weakness, and it's going to take a miracle for Ayanokouji Kiyotaka to earn enough points to rise from the much derided Class D and make it to the top of the school elite, especially given the ruthless nature of the student body.

I rather liked the idea of Classroom of the Elite, a school that promotes ruthless opportunity and rewards those who will stop at nothing to reach the top. The first volume certainly doesn't offer up any safe spaces for our curiously casual hero, and the teachers don't seem to care very much for social issues - UC Berkley this is not! Ayanokouji is sat next to a haughty and dismissive girl named Horikita who he forms something of a working relationship with, though as the school's true curriculum comes to light, she's probably his best ally to surviving the coming three years.

As someone who has been self-employed since the age of 16, I found a lot of familiar faces in this book - competition in the real world is fierce, underhanded and sometimes criminal, so needless to say this book spoke to me on a pretty personal level. I actually liked the cut-throat nature of the manga, especially since it was an environment similar to the one I found myself thrust into many years ago, with companies asking me to code websites for free (in return for the privielege of me linking it to my own website) or rival companies spreading rumours about me to clients in order to steal away business. Similar underhanded tactics are employed here, especially by the super-cute Kushida who acts like an angel but by volume's end uses a tactic I can only call "potentially triggering" - let's just say, if you don't like Rising of the Shield Hero, you're going to have the same problem with this book and should probably move on. I've written articles at the height of the #Metoo movement on the topic, so let's just say these things do happen, and if you're mature enough to accept that in the context of this story, you can enjoy the rest of it.

In terms of the art, it's beautiful and weighty, with plenty of tone employed to create a feeling of sumptuous depth to the proceedings. Character designs are varied enough to make every character distinctive and memorable, and backgrounds are meticulously detailed, giving the campus a real personality. There's also a *lot* of cheesecake in the book, so if that's your thing, you'll be well served here.

Can I recommend this manga? Based on the first volume, I'd say yes. The pacing is excellent, with great art, distinctive characters and plenty of heinous intrigue. Having not read the light novels or watched the anime, it'll be a toss-up now as to how I take in the rest of the story, but one way or the other, I'll be seeing Ayanokouji's journey through to graduation!

9
A classroom that reflects the vicious reality of the real world , which is strangely refreshing!