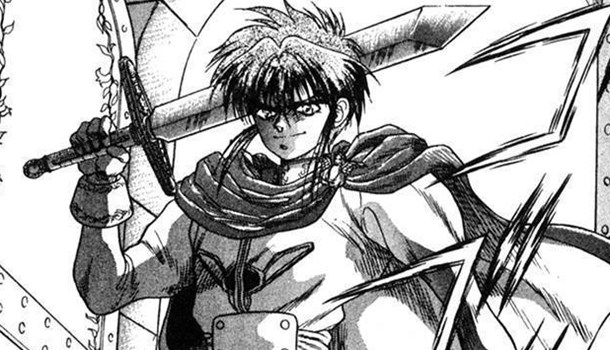 The tale revolves around a young girl called Hitomi, who has a talent for Tarot. All her school friends come to her for predictions of romance, and she's also very popular thanks to her excellent abilities on the track. One fateful day, while running, she begins to feel peculiar, and before she knows it, she's been transported to Gaea, a kingdom where the Earth hangs in the sky like a moon, and the world is populated by beast-men, knights and royal families. However, Gaea is in the grip of a war, where giant piloted mechs do battle with lances on the battlefield. Hitomi's fate seems tied to two young men - the brave knight, Alan, and the brash prince Van, who pilots the most advanced mecha (guymeleifs) known as Escaflowne.

Sounds fantastic, and indeed the animated version of the tale is every bit as good as it sounds. So why is the manga a mess? Well, there were problems with the production of Escaflowne, and two manga were eventually released, this being the first. While the series melded shonen (boys) and shoujo (girls) styles impeccibly, the original manga was very much a shonen affair, and subsequently much of the charm was lost. The stories also differ dramatically, and therefore this isn't the Escaflowne you may well know and love.

The art is messy, which makes it very difficult to understand what the hell is going on. The characters are also seemingly shallow and stupid. Their moods change faster than a 13 year old full of hormones, not to mention they don't really seem to care much about what's going on.

The show and movie were charming, thoughtful tales of giant robots and adventure. This, however, is bloody awful. Regardless of the odd few rays of light in these first 4 volumes, it's still a total chore to read.

The characters are completely different from the anime and have lost what made them special.  Hitomi still goes to Fanelia and Van's still aggressive, Allan's still cool and Dilandau's still bonkers but something's wrong. The mech fights are blurry and the dialogue centres around Van being sexist, aggressive or insulting.

From bad art to bad script to very bad characters, this is a total mess and should be avoided.

3
A waste of your money and your time. Completists only (note: things do get better later in the series)

Written by SmellyOne on 01 May 2005
LATEST REVIEWS