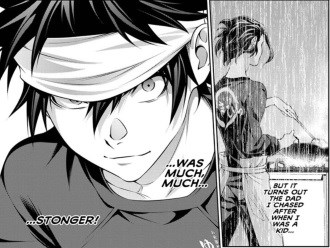 Once again we have finally reached that rare event – the ending of a long-running Shounen Jump series, as Food Wars has reached it’s end with it’s 36th volume. This is hitting shelves some weeks in advance of the anime episodes covering the same material thanks (if that's the right word) to certain ongoing global events causing a delay.

There have been 318 chapters which is over six years of material for a weekly publication like Shounen Jump! The question therefore is simple – can this final cheese course prove a satisfying end to the sumptuous meal we have been served or will it prove to have long outstayed it’s welcome like many of its fellows before it?

For those who haven’t been following the story so far, Soma and co are presently engaged in the high stakes cooking tournament known as The BLUE, where they are being pitted against not just an array of talented chefs but also a team of rogue underworld cooks known as the Noir (no, sadly this is not the most awesome crossover ever). Whilst Erina seeks to settle family matters with her mother, Soma is, as ever, is largely looking for the thrill of the competition - especially as it means a rematch against his father’s old apprentice. As the final volume heads (rather obviously) into the final round, it’s time to rattle those pots and pans one last time!

It has to be said that the whole of the final arc of Food Wars has felt a bit... off. In fact I wouldn’t be at all surprised if it were to come out that  Shounen Jump had forced the series continuation, especially after the previous arc gave concluded so well. The signs are pretty obvious given the escalation of things over the course of the arc, as the Noir chefs have been bringing out a truly ridiculous selection of ‘knives’ along with skills that aren’t so much cookery as full-on super powers! The sheer ludicrousness of goings-on has rather taken some of the shine off the series as it’s much less impressive to watch someone use what’s basically magic to produce a meal rather than just impressive knife skills that you could theoretically have in the real world.

On the other hand, the cast are as fun as ever with their superbly exaggerated reactions bringing real life to the series. Shun Saeki’s art remains superb, effortlessly depicting comedy, sex appeal and plates of food which are even more appealing! The detail in some of the art is great and it’s also very clean and consistent too, a factor that has always made Food Wars a brilliant read.

To no-one's surprise, Food Wars has been one of our favourite series, manga or anime. We're certainly sorry to see it go, but at the same time it’s quite a relief given that the creative team have clearly reached the point where, if nothing else, it’s time to down tools for a while until they can come up with material that doesn’t require superhuman abilities (I still want to see the gang compete on Masterchef and Bake-off though!). So for now it's goodbye, for now at least, and all that remains is to compliment the chef and work out the tip. Err, we’re splitting the bill right?

7
It's a little overcooked, but it still tastes great!