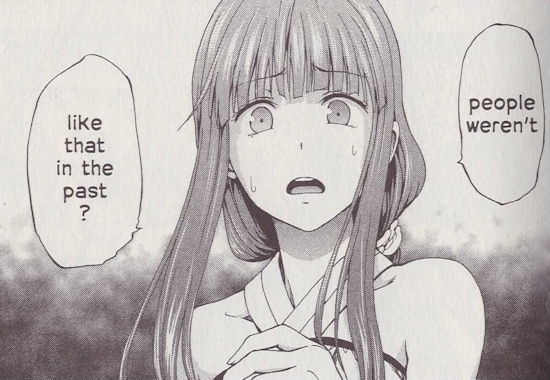 After an auspicious - and to be frank, rather perverted - opening volume, From the New World really showed its true colours with a terrifically grotesque turn of story-telling that washed away any concerns that this adaptation of an award-winning novel would be turned into little more than cheap titillation. Now that its die is cast can it continue in this vein, however?

Make no mistake, these next two volumes of From the New World don't shy from sex and nudity, squeezing in some short scenes that are about as explicit as you can get in an otherwise mainstream manga. Although there's doubtless an eye towards shifting some extra copies here, this treatment of the sexual mores of its cast does tie in closely with the far-flung future world presented here, and in fact the main thrust of its depicted sexual trysts actually morphs into an important plot point as the series moves swiftly forward in some truly interesting directions.

With the group's adventures beyond the border rope as depicted in volume two, it seems as if normality has returned for our group of friends - or has it? Something different which is blindingly obvious to the reader is less so for Saki, Maria and company, but as the feelings of Saki in particular swell so they bring with them some unusual sensations and half-formed memories that ultimately make it clear that something is majorly amiss. This revelation sends the group out beyond the borders of their town once more in search of the truth before the powers that be realised that their seemingly supressed memories are returning, but the truth that they find is far, far more all-encompassing than they could possibly imagine.

The shockwaves of what they discover reverberate hard and fast in emotional terms, which ultimately leads us into the fourth volumes and a major skip forward in time - while much has changed plenty has also remained the same, much to the disappointment of Saki, now in her mid-twenties. However, unbeknownst to her the events of all those years ago are still in play, and they're about to present a threat which could obliterate what remains of the human race.

Having been thrilled by the quality of its second volume, it's fair to say that these subsequent volumes of From the New World only raise the bar further - the emotional payload of its characters is used excellently throughout volume three in particular and the way it presents its big revelations as to the state of the world and why it exists in the form that it does is both fascinating and utterly compelling. Following thing, significant skips forward in time are always a potential risk for a story, yet the dilemma posed by the lid being lifted on the true nature of humanity serves as a perfect jumping-off point for us to rejoin a main character who is still trying to find ways to fight against that truth while also accepting the inherent common sense that underpins it. As if this isn't enough to get your teeth into, by the end of volume four we're almost entering survival horror territory as things escalate rapidly in some unexpected directions.

Normally, a series which shifts direction and the main focus of its narrative in such seismic ways ends up as a jack of all trades but master of none, but somehow From the New World manages to do so without any such issues - its human drama is tangible, its world-building is simply superb and the thought-provoking fare which comes from it is unique in its complexity compared to the "black and white" problems and solutions that works of fiction so often favour presenting. That such considered fare sits easily alongside the grotesque and the nerve-wrackingly terrifying latter chapters of these volumes is a real testament to what is perhaps one the best-delivered stories we've seen in manga form for quite some time.

All of this is ably assisted by Toru Oikawa's art, which continues to be absolutely stunning - the level of detail throughout really can't be commended enough and breathes life (and occasionally death) into every panel, and there are some double-page spreads and images that you'll be happy to simply sit and soak in that detail and atmosphere before moving on. Just as amazing as the quality of the art is its consistency - characters never seem to go off-model, and moments of super-deformed comedy are rare but well-placed. Such a versatile and wide-ranging story needs art to match, and from nipples to supernatural napalm this series has it covered.

From its slightly questionable beginnings, From the New World has quickly cemented itself as an absolutely must-read series that takes the smart storytelling of its source material and packages it in a visually and narratively superb way that is almost beyond compare. As long as you aren't squeamish about its sex or exploding monsters, this is a series that you unquestionably shouldn't miss - it knows how to entertain and provoke thought at the same time, and it's a rare ability that should be treasured.

10
Its world-building and story-telling is as incredible as the quality of its art; From the New World is turning into 2014's must-read manga.
COMMENT AND DISCUSS
blog comments powered by Disqus