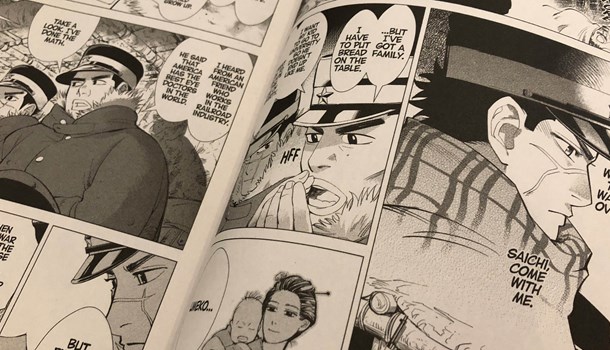 Golden Kamuy was first published in Japan in 2014, winning the 9th Manga Taishō award in 2016 and eventually receiving a first English language printing in June 2017. Crunchyroll licensed an anime television series which started its run in April 2018.

Golden Kamuy introduces us to Sachi Sugimoto (a seemingly immortal Russo-Japanese war veteran) and his coincidental Ainu (I explain later) companion Asirpa. Sachi is haunted by the death of his childhood friend Toraji and his dying request for Sachi to look after his wife Umeko. We follow the unlikely duo on their tortuous quest to find a fortune of hidden gold. You won’t get anything more about the plot from me for fear of spoilers, this being a manga I really don’t want to spoil for you. However I do want to say that I love the setting of this tale, both historically (following the 1904 Russo-Japanese war) and geographically (in Hokkaido, Japan’s northernmost main island). I feel like I learnt so much reading this manga, be it about differences in the animals on Hokkaido or the Ainu peoples, their culture, equipment and lifestyles. I promised earlier to explain about the Ainu, they are an ethnic minority group indigenous to Hokkaido, who at the period in which Golden Kamuy is based were persecuted and marginalised by the Japanese. The Ainu had their lands taken from them, they were forced to learn Japanese and adopt Japanese names. We maybe miss something reading the English language version as an Ainu language linguist apparently supervised the Ainu language in the story, so if reading Japanese manga is your thing then this may be an additional point of interest for you.

In terms of the artwork, I really liked it. I found everything really clear to follow, it was easy to make out movement and Sachi’s nightmare felt very trippy. All of the characters have their own distinctive looks and their personality and emotions really come alive through the drawing. There is a big focus on characters and interactions, but the use of backgrounds and scenic panels does enough to give a sense of location and environment. You will find quite a few grim and bloody scenes here, so if that sort of thing isn’t for you then you’re probably going to want to steer clear.

The first volume introduces us to the characters (particularly Sachi) and the lead up to why their quest begins. That being said there are certainly key developments in the story here and I’ve definitely been hooked enough to want to continue reading future volumes. At the time of this writing there are 13 Japanese and 4 English volumes, so there’s plenty for you to get stuck into and not too much to be daunted by.

In summary Golden Kamuy is great! It has beautifully expressive artwork, a captivating story, interesting characters and if you’re like me and enjoy learning something new then it will tick that box for you as well. I can’t help but recommend this manga, unless you don’t like anything that’s not fantasy or sci-fi, or you can’t handle a little gore.

Primarily a board game addict, Tom’s interest in anime and manga began when some friends introduced him to Studio Ghibli and Attack on Titan.