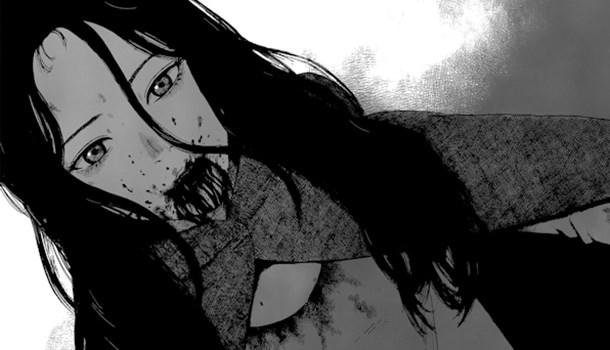 From the acclaimed creator of Flowers of Evil comes a vampire story that aims to throw the harsh light of day onto the bloodsucking mythology. While the concept is far from new in this post-Twilight, post-Blood world, if anyone can breathe new life into the genre, it is Shuzo Oshimi.

The cover makes a terrific first impression - a haunting young woman with blood smeared across her lips in terrific watercolours, it's a poster waiting to happen, and certainly sets the mood. Upon opening, more roughly-coloured panels await, depicting a night-time attack on a man walking the streets by a predatory young woman. No words are spoken, just heavy breathing and screams, and it's a terrific opener to the book.

Once back into more familiar black-and-white territory, we're immediately introduced to our protagonist, Okazaki, a meek victim running errands for more popular classmates. It's a familiar setup, and from the off there's an expected through-line for the plot that will see our mild-mannered every-man find himself turned and experiencing the changes that come with a more nocturnal way of life. And of course, this is exactly what we get.

The problem with Vampire fiction is that, by its nature, it has limited narrative reach. It's such a trope that whether you're a fan of the original Bram Stoker version, Anne Rice's more contemporary Interview With the Vampire, or just geek out on Schumacher's very 80's Lost Boys, the teenager-to-vampire story has been told exceptionally well over decades. Hell, you've got 7 seasons of Buffy and 5 for Angel if you want to go all in, and that's before mentioning Twilight. As such, what Happiness really needs to deliver on here is something different in order to truly stand out. As of volume 1, no such variation exists.

As you might expect, Okazaki does indeed meet our cover-girl, gets bitten and starts to experience the changes that we all expect. So far, so vampire. But what might actually lift this above the ordinary is less about our "hero" and more about his surrounding cast. Having taught his bully a lesson, Okazaki begins to attract more attention. He stumbles across a loner called Yukiko Gosho who flirts with him somewhat, and time will tell if she becomes victim or ally, but oddly enough his bully Yuuki and girlfriend Shira also seem to be changing their opinions, to the point where Shira actively seeks out Okazaki's help as Yuuki himself turns out to be the victim of bullying. All in, I found these characters far more compelling than Okazaki himself and it's with these characters I'll be investing my interest over coming volumes.

The artwork, just like Flowers of Evil, has a rough quality to it which I admire. Those of you who follow my manga reviews will know that I'm all about aesthetics and sense of place - if you can't be bothered to include backgrounds in your work, I can't be bothered to score it highly - but that's not to say that everything has to be as polished and perfect as a Ken Akamatsu book (and whatever you think of the stories, the artwork is always flawless). Shuzo Oshimi's work always feels personal because the artwork is so genuine, with an honest, hand-crafted feel.

So, the opening volume lays out a stall with some familiar ideas, but this is one of those cases where we really will need to see more to judge the direction the book is taking. I'm well aware as a person who buys as much manga as I receive to review that this is an expensive hobby, and at over £10 a book we really do need to be careful about which rabbit-holes we dive down, so my advice would be that, unless you are a devout follower of all things fanged, wait for me to buy the next volume before making the purchase yourself.

7
Solid but not exceptional, this is standard vampire storytelling so far. We can only trust in Oshimi to deliver something outstanding down the line.