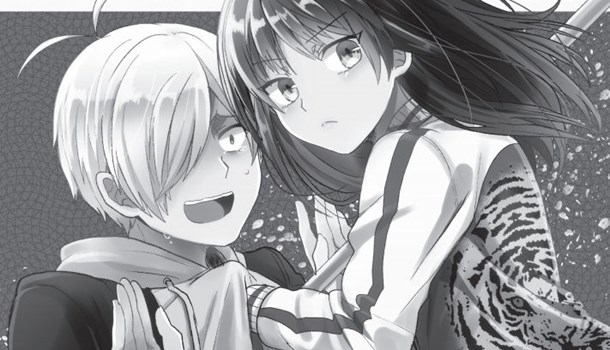 As a fan of the rather excellent Nagatoro manga, I've found myself enjoying the more tsundere romantic tales of late, and the latest release from One Peace Books certainly fits the mould. I Belong to the Baddest Girl at School follows doormat Unoki as he finds himself the object of desire for the school's most notorious delinquent, Toramaru. Terrified of her attention, he willingly submits to her control and nervously awaits her every command. However, beneath the violent, glaring exterior, Toramaru is infatuated with her new "slave" and desires nothing more than a healthy romantic relationship. She just can't express it in ways that aren't utterly terrifying.

Unlike Nagatoro, we get a lot more initial insight into the situation, relying less on implication and single panel reaction shots, I Belong... shows both perspectives evenly, which makes the characters a lot more instantly accessible. As the first book progresses, Unaki is introduced to his master's other minions, namely the airheaded "right hand girl" Matsuri and the violent but thoughtful Yutaka.

The book is a masterclass in miscommunication, with both parties seemingly unaware of the true feelings of the other. There are some great flashbacks, particularly Toramaru's perspective on asking Unaki out, with her putting herself out there with no expectations of him reciprocating - Unaki of course just thinks that yet another bully has just claimed his as a dogsbody.

The emotional ride is helped no end by some solid artwork. It's not the most complex but it is very expressive, providing plenty of emotional impact when conveying the two points of view as events unfold . Unaki's acts of selfless kindness cause heartache for a chapless Toramaru, her endless mood swings causing him nothing but confusion amke the whole book a fun read. The throwaway comments from other cast members are also occasional gold;

"I'm used to getting mine (umbrella) stolen, so I'll be alright" - Unaki

"You're used to so many depressing things!" - Matsuri

I liked the cast in this book, there's a genuine feeling of comradery between the gang and the romance between the two leads actually seems to be going somewhere by the end of the book (there's nothing worse than a neverending burgeoning romance). This  is authour Ui Kashima's first ongoing story, and it's off to a strong start. Despite my comparisons to Nagatoro, there's a real sense of classic Japanese romantic comedies like Maison Ikkoku and Kareshi Kanojo no Jijou. While it's not quite at a level to compete with those titles (yet), the comparison is a flattering one and gives this book (and author) much to be proud of.

Though this was a digital review copy, I've pre-ordered the book regardless. That doesn't happen often, so take it as the most complimentary of approvals from me. I'm looking forward to the next volume, and the first one isn't even out yet!

8
Great plotting, a witty translation and some fantastic panels, I had a great time with the book and it certainly left me wanting more.