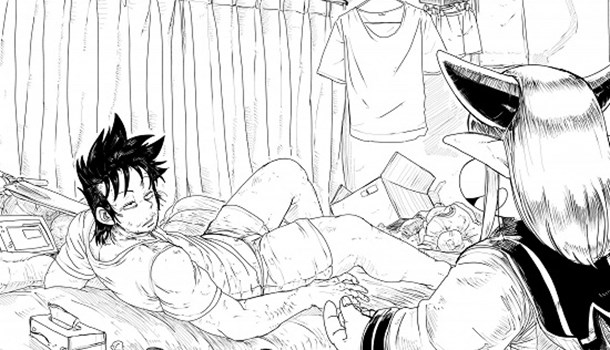 Recently I was looking back on Goblin Slayer. When I reviewed the early volumes of the manga I fulsomely praised it as a "heavy-metal masterclass" with a fierce cutting edge; in the years since that review though that edge has become blunted through repeated swings. The shock and awe of its violent opening chapters has never been quite matched and it's since settled into a solid but standard fantasy adventure. Nonetheless, even if Goblin Slayer is no longer the hottest talk of the 'Tubes the series and its multiple spin-offs have still been trucking along steadily and successfully, serving a satisfied audience even if it is not been hitting the headlines.

A big part of what has sustained Goblin Slayer is the tremendous momentum it enjoyed shooting straight out of the gate thanks to another quality I mentioned in my review - absolutely perfect timing! Sharing the energy of the 2016 reboot of the videogame Doom hugely magnified Goblin Slayer’s profile. The perception that lets you catch the swell of a rising wave is a skill that supports stories as much as surfing, and it is also one that Seven Seas seems sure that it has struck.

One of the big-name series that has debuted in the current anime season if The Great Jahy Will Not Be Defeated! It features the struggles of a once-powerful mistress of the underworld, now defeated and cast out of her hellish dominion, struggling to cope with her reduced stature (quite literally, as she’s shrunk down to the size of a child) and survive in the modern human world. Jahy no longer has fearsome magic or demonic legions at her command, instead of a fortress of black obsidian she reigns over no more than a one-room flat, and a landlady with a final demand for last month’s rent is a force more terrible than any fire-breathing dragon. Seven Seas Entertainment quite smartly looked ahead to the broadcast schedules and has licensed its own counterpart manga Level 1 Demon Lord & One Room Hero, to be published at the same time as the Great Jahy Will Not Be Defeated! anime (exactly so – the English version of Level 1 Demon Lord & One Room Hero is brand new and the back matter confirms that it was printed just this August). It’s a feat of perfect timing which is well-poised to increase the manga’s stature, but timing is not quite the entire secret of success – even when you’re are the crest of the wave you still need to show some balance to stay on top of your surfboard. Is Level 1 Demon Lord & One Room Hero the next big kahuna or can we only expect a wipeout?

Ten years ago, the evil Demon Lord was slain by the mighty Hero in an epic battle of which they shall sing sagas for evermore. Yet with his dying breaths, the Demon Lord cackles a dire prophecy – the Hero has only earned a stay of execution, for soon the Demon Lord will revive even more powerful than before, ready to wreak a bloody vengeance that will annihilate the Hero and the forces of Good and herald an eternal age of terror! The Hero should stay poised for the arrival of that dark day…

Ten years later, in the present day, that dark day comes! The Demon Lord lives again! …with some caveats. So eager was the Demon Lord to have his rematch and prove his true dominance over the Hero that he’s rushed his restoration, coming back to life far sooner than he ought so that he can still confront the Hero while he remains young and strong and a genuine achievement to defeat. This also means though that his revived body is underdeveloped – with less time to incubate, the Demon Lord has lost his stature as a muscular building-high titan and has returned in the form a small girl. Frustrating, but manageable… yet in the intervening decade much more has changed than the Demon Lord himself. In the new era of peace the world has very quickly upgraded itself from medieval fantasy to a mirror of modern-day Japan, while the Hero… uh, isn’t.

Heroes can slay monsters and cast down devils but there is one Prime Evil reigning over all the archons in the foul hierarchies of Hell that even the most valiant of knights cannot slay… cancel culture! In the intervening years the Hero became embroiled in scandal and far from being the feted saviour of the world he has been condemned as a creep. The Hero has lost his treasures, lost his comrades, lost his renown, and has been reduced to eking a meagre NEET existence in an unwashed dump, with nothing to do other than get fat day-drinking. The Hero has dwindled into a down-and-out slob.

Yet the Demon Lord strangely enough is in no mood to celebrate the humiliation of his hated enemy. The Demon Lord wants to crush a dauntless Hero to make the world quake in fear at his coming, but there is nothing impressive or dramatic to be found in squashing this snotty pimple. This just won’t do. So in a truly bizarre turn of events the Demon Lord takes it upon himself to become the Hero’s carer, all to cajole the Hero back into activity again and train him back up to fitness… all just so he can kill him properly, right?

It’s a topsy-turvy setup for a comedy and also a good one for making Level 1 Demon Lord & One Room Hero stand out on its own merits – although its publication has been timed to accompany The Great Jahy Will Not Be Defeated! it is definitely not an imitator or a plain copy and is distinctive as a contrasting counterpart. Whereas The Great Jahy Will Not Be Defeated! (and going back a few more years, The Devil Is a Part-Timer and Dropkick on my Devil! too) confounds villainous monsters, Level 1 Demon Lord & One Room Hero counteracts it with the sad truth that even the goodies struggle to adapt to an ungrateful world, and it does lead to substantially different encounters. The distaff scenario extends to giving Level 1 Demon Lord & One Room Hero its own independent reason to be read for a different concept of fanservice, too – if Jahy is a luscious caramel lick of “delicious brown” then the Demon Lord’s regeneration into a chubby shortstack with a rounded Oba-chan face will I’m sure be soon bubbling across the internet with plenty of “thicc” appeal.

There is actually a lot more to the artwork of Level 1 Demon Lord & One Room Hero than just fanservice - even if the demonic servant Zenia’s high-cut leotard is practically giving her a permanent wedgie, we also have to suffer the Hero’s knobbly heinie in a few panels as well. The artwork as a whole has good shading with crosshatches of differing weight and inky shadows which do conceal a Ring-style ghost who seems very piqued that no-one is noticing that she’s haunting them. Even though it’s a comedy manga it can do action shots, such as when a bottle is cut open in mid-air and we see the water spilling out in an eruption. The characters are very expressive, and not always just in cartoony comedy double-takes either. When the Demon Lord visits the Hero to find him slumped at home watching porn, the Demon Lord’s crestfallen look of despondent, defeated dejection at being confronted with undeniable proof of how pathetic and contemptible the once-respected Hero has become is actually a lot more impactful than the standard eek-baka-hentai slapdown. It also knows how to play around with fanservice tropes too – in one chapter, the Demon Lord tries to coax some vim, vigour and virility back into the Hero by inviting him to pick a wife out of the Lord’s lieutenants – but as the Demon Lord of course rules an evil army, they’re all monstergirls and the Hero is repulsed by all of their fangs and snouts (although I personally consider a lamia working out how to pedal a bike to be downright heroic). The whole scene comes across as a fairly catty counterblast attacking the indulgences of Monster Musume and it’s entertaining to see a bit of inter-manga rivalry drama play out on the pages! This also leads into another sensibly underplayed section, when the Demon Lord mocks the Hero for his unimaginative vanilla tastes and magically transforms into a bishoujo babe… the long silent panels of mounting disquiet when the Demon Lord realises what has just been done adds much more genuine awkward tension than a simple tsundere outburst.

The Hero himself is also very well-drawn, with an observational quality that you actually very rarely see in anime or manga – a formerly-active person who is falling out of shape and is going to seed. His thick neck, double-chin and oily pallor are uncomfortably believable.

The writing of the manga is not all just quick sitcom odd-couple sketches – the final chapter does introduce some plot as one of the former members of the Hero’s party back from his adventuring days leads a rebellion against the kingdom. A long dialogue of fantasy politics might seem to be rather too dry and it does take up a substantial chunk of the volume, although it does seem to be setting up an arc of the Hero manning back up an getting the broken band back together again, so the manga as a whole shouldn’t feel too meandering.

That it’s not as meandering as the Hero’s down-at-heel life is another positive point for Level 1 Demon Lord & One Room Hero. Although its high concept might make it sound gimmicky, the manga is more than the sum of its parts – a minor application of real-world topicality with social media struggles, some moderate sexiness and a major urge to shape up mean that Level 1 Demon Lord & One Room Hero is surprisingly well balanced with an engagement that lasts longer than its gags.

8
A fantasy adventure that upends expectations and sometimes feels all too real!