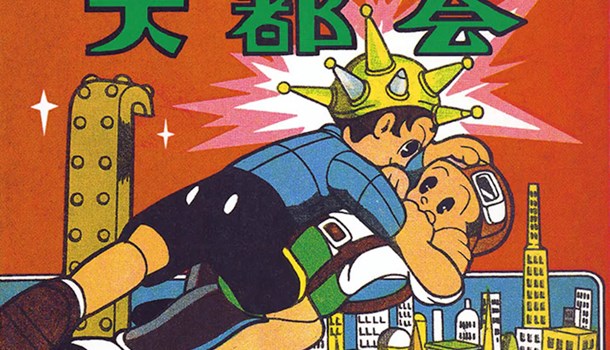 The first thing I'd like to say while writing this review is that the film version of this manga should never have been called ‘Osamu Tezuka’s Metropolis’ as it is called in the English language release for the simple reason that it is not Osamu Tezuka’s Metropolis, in fact it is a lot closer to the Fritz Lang original than the manga is.

There are a few similarities but the massive amount of differences screams at you at the top of its lungs. So I am going to issue this piece of advice to anyone trying to read Metropolis: don't think too much about the movie when reading this comic, read it for it’s own plot and characters.

First off the main character in the movie, Tima, is very, very different, not only is she called Michi here; she isn’t even a girl! Michi is genderless in the manga but for the most part takes on the appearance of a male child with a feminine face, and though Michi does take on female appearance it is only in a small percentage of the panels in the entire book. The Kenichi-Tima romance that appears in anime is also eliminated. There is no struggle between the downtrodden working class and the social elite in the manga, the rebellion is taken by the robots of Duke Red against all humanity.

Another thing to point out is that Michi is obsessed with finding his parents that, unknown to him, do not exist, and this replaces the anime's plotline of Tima’s obsession with Kenichi. Also Michi has powers which Tima does not have, powers like flight, super strength, underwater survival and the ability to switch between male and female form.

Duke Red is quite different too, rather than a political leader who is admired by many in Metropolis he is a much feared terrorist in the manga, there is no Ziggurat either and the sun spots are created by a substance called Omothenium. So if you read the manga try not to think of the movie at the same time, otherwise you’re in for a headache.

8
A very good story but it can be confusing as hell if you think about the movie too much!

Written by The Otaku Witch on 01 Jan 2002
LATEST REVIEWS