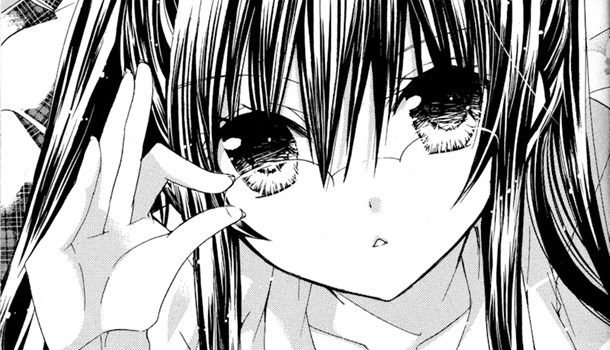 I should start off with an apology - this review has been around a month in the writing due to the whole Christmas and New Year thing. Now that all that is out of the way I could snuggle up, re-read Missions of Love and put some thoughts down about it.  The synopsis on the back admittedly sounds rather dicey - all about servitude in the name of romance, ooh err. Does it still manage to charm?

Missions of Love stars Yukina, a high school student with a secret second life as an author of cell phone novels: a Japanese phenomenon of books with frequent text message delivered micro-chapters sent right to your phone. She is stuck in a rut as her audience start to demand racier and more romantic tales from her, something that she has no experience in due to being an utter introvert. By accident she discovers evidence that Shigure, the most desirable male member of the school, is in fact a massive manipulator and creeper - exposure of this evidence would ruin his image and daily life. Hungry for research material into romance to fuel her tiny novel career, Yukina embarks on a campaign of blackmail to bend the highly desirable boy to her whims. Can he break free without losing face? How far will she take her campaign of highly dubious “research”? Is it just me or is this premise pretty damn creepy?

Missions of Love fails right from the get-go as its main cast are horrendous people who are utterly impossible to empathise with - I can’t really say it in clearer terms than that. Frankly, blackmail just isn’t very romantic to me and the way that it is framed in this series just makes it fall flat from the get-go. Even if you are able to get over the asinine setup and the weak motivations behind it, which already takes some concerted effort, then the sheer unpleasantness of Yukina and Shiure will kill any validity the plot had. It would probably help a great deal if the series was not so schizophrenic in its efforts to help you relate to the feuding pair; one second one of them starts to have second thoughts about perpetuating the cycle of stupid emotional violence they have gotten stuck in but then they go and ruin it by doing something utterly atrocious. Even worse are the cases where the writing tries to pass off a new act of dickery as something noble with no hint of irony, such as an instance where the main girl frees herself from a confrontation about her ill behavior by acting like a stalker. This act is presented with no ill effects and is framed as a smart way to get out of the situation! If there actually was irony present, then that did not come through in the writing at all due to a lack of chops. This causes the story to have a number of hard disorienting swings as it jumps from trying to sell you on one character and then the other in quick succession.
This isn’t to say the entire cast is a write-off - Yukina’s chubby mother and saintly cousin Akira are pleasant oases of sensibility in a sea of bad decisions, selfish motivations, and arrogance. Of course they are barely present in the story, which is a great shame.

The art of Missions of Love is actually quite nice to look at at first glance, but it falls into a few traps that left me grating my teeth in frustration. Chief amongst these is the series’ almost fetishistic use of screentone. I don’t have anything against screentone per se, but when it is slathered over the page with no restraint or real reason it begins to look like a lazy shortcut. Another bizarre and quickly-exhausting quirk is that everyone’s hyper-detailed school uniform has extreme shading applied to it, making everyone look like they are walking around in plastic-wrap clothing. This isn’t to say everything is bad - the series has some awesomely presented moments that really stand out, even above the previously mentioned niggles. The art also has moments of genuine charm when the cast slip into cute superdeformed models during the infrequent comedy moments.

These little comedy moments are a nice break from the ham-handed dramatics of the main plot and were definitely the high point of the volume for me. The cheeky little gags come close to being fully self-aware of the absurd storyline that they are sandwiched between but sadly don’t go the whole way. Perhaps in an alternate reality this series would lampoon absurd melodramatic romance plots instead of being one itself. Oh well.

A final thing that irked me about this release was how cheap the production felt. The lazy font choices, page cleaning and typesetting continually grated on me during reading and gave the volume a very definite “thrown together” feeling. This carries over to the translation notes present in the book, which felt equally low effort - the book has an extraneous in-line translation note for a centimetre to inches conversion, but then does not call out more important translator notes exist at the end. These notes, which cover a number of important terms relevant to the main premise including what a “cell phone novel” is, feel clunky and unedited and do little to enlighten the reader. For a series that relies upon a concept that needs a little explanation for non-native audiences, it feels like a big miss. There is even a really bizarrely translated teaser right on the front cover which, while it makes sense, causes you go cross-eyed trying to parse it.

Somewhere deep down Missions of Love is a decent series which is sadly smothered by layer upon layer of inept handling and just plain bad ideas. The entire blackmail angle behind the series is deeply off-putting, especially as it keeps doubling down on this concept without taking time to justify or excuse it in any competent fashion. The art comes with a share of issues that made it distracting to read and cover up the positive elements that are present. Finally, the actual presentation of the book just feels lazy. I came away from the book feeling creeped out, frustrated and like I had wasted my time reading it. If you are looking for an interesting angle on romance, you can do much better elsewhere.

3
While it has interesting elements, this series can’t get past its creepy setup and lazy execution.