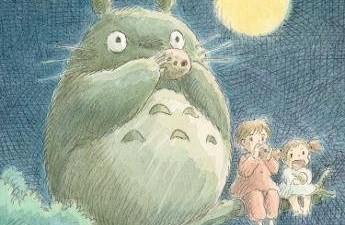 Sometimes you realise that something has passed you by that you really should have noticed sooner. So it was earlier when, whilst browsing through a bookshop, I came across a gorgeous hardback edition of the novelisation of My Neighbour Totoro. Which rather than being shiny new thing turned out to have been published in 2013… Oh well, better late than never!

For those who don’t know the story by now the book tells the story of Satsuki and Mei, two girls who move to the countryside with their father in order to be closer to the hospital where their mother is residing. Whilst exploring their new surroundings the two girls attract the attention of a colossal forest spirit they call Totoro and learn about life away from the big city.

Interestingly the novelisation does not follow the film exactly. For starters the story is told almost entirely from Satsuki’s perspective. This means that most of Mei’s adventures from the film, including her first encounter with Totoro, either don’t happen or are told via Mei explaining what happened to Satsuki. However, we get a much better picture of the life of the two girls and the reasons behind their situation. Satsuki is still very much the tomboy but is much more well-rounded as we learn about this young girl who has to learn to be essentially a second mother to Mei. We see the girls' extended family, Satsuki’s friends and even ‘Granny’ gets a much more expanded role here.

The counterpoint to this is that there’s much less magic in the story. Ghibli’s titular mascot barely appears and doesn’t turn up at all until at least halfway through the book. This is a little bit of a shame but at the same time it’s hard to see how they could have fit more in without destroying the flow of what is a very charming novel. It may mean that the younger audience that the book is primarily aimed at may not engage quite as fully as they do with the film however.

Tsugiko Kubo’s writing is charming and pleasantly subtle and thankfully the translation from Jim Hubbert proves to be more than up to the task. It doesn't suffer from the overly dry, stilted work that translations of Japanese novels can sometimes suffer from. In fact the only place you can really feel the translation at all is on a few occasions where a little extra text has been added to give more explanation to a particularly Japanese concept.

The book overall is a frankly gorgeous hardback with very high paper quality making it a joy just to hold and run your fingers over. Plus as a final bonus there are a variety of beautiful watercolour images all created by Hayao Miyazaki himself.

If you are at all a fan of the film then you need to have a copy of this on your bookshelf. It’s a beautiful adaptation of one of anime’s most beloved films and it has been given every bit of the respect it deserves.

10
A beautiful thing through and through.