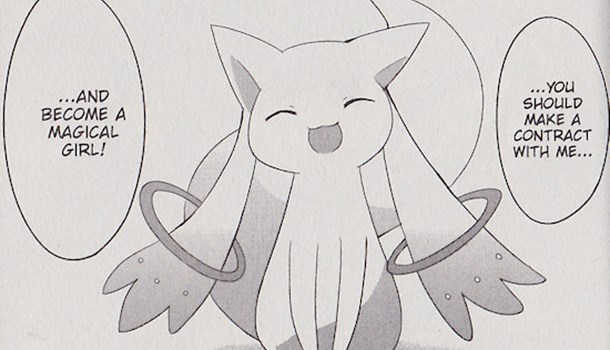 It is, without a doubt, the biggest anime sensation of recent years - a franchise that you can't escape from within either the online sphere or the convention and event circuit.  What's more, it's coming to the UK in its original animated form later this year.  For now however, if you're simply too impatient to wait, then Yen Press are offering the first chance for UK fans to get their hands on the series legitimately via their release of this manga adaptation of its story.

At the centre of this story is Madoka Kaname, a girl who (aside from an odd dream as this volume opens) is the epitome of normality.  With a settled, loving family and some good friends, but with no particular talents or specialities that she can call her own, Madoka is simply drifting through her life, unsure of what the future will hold.  Even when the girl she recognises from that aforementioned dream arrives at her school as a transfer student, life simply carries on as normal for Madoka... for a while at least.

The next thing we know, Madoka is called upon as the rescuer to a cute little critter named Kyubey, before stumbling into a weird and strange labyrinth with best friend Sayaka Miki - it's an other-worldly place that appears decidedly dangerous before the appearance of a magical girl named Mami appears to save the day.  With Kyubey revealing himself as the arbiter of these magical powers, both Sayaka and Madoka are offered the chance to become magical girls themselves, tasked with defeating "Witches" and their familiars in return for their cute and fluffy master granting them a single wish of their choice.  Although most girls would jump at the chance to have any wish they can imagine fulfilled, our protagonist in particular is a rather more careful and thoughtful sort, determined to take as long as she needs to make her decision and choose her wish - a wise move, as becoming a magical girl isn't all cute outfits and friendly mascot characters...

Whether you're entirely new to the world of Madoka Magica or have already seen its animated incarnation in some shape or form, it's worth noting that this manga adaptation is literally just that - a strict, panel-by-panel adaptation of the source material, with this first volume covering the first four episodes of the anime.  Thus, if you're looking for a different angle on Madoka Magica's story, or don't want to spoil the anime when you come to watch it, then this manga may well not be for you.  If, on the other hand, you are looking for a literal retelling of the original story, then this opening volume is a work of brilliance that goes about setting up a happy, jolly story centring largely around Madoka and Sayaka before dashing any such expectations against the rocks with its shocking twists that lose none of their impact in the migration from small screen to paper.

In terms of this volume's artwork, although it won't make your eyes pop out of their skull on account of its sheer brilliance or anything to that effect, it is (much like its story-telling) a solid effort that is true to the original anime series in terms of character designs, backgrounds (especially important once Witches and their familiars start popping up) and the overall aesthetic of the series, with its biggest divergence being that it somehow manages to make Kyubey look even cuter than his animated incarnation!  This effective use of art drives the story well, and although it does skimp a little on any action scenes it's more than capable at delivering this first part of its story in an accomplished fashion.

Yen Press have once again delivered a well-presented English language translation here, even if its lack of explanation of the honorifics used within the volume could be majorly off-putting to beginners who haven't yet gotten to grips with them - a rare oversight from a company that tend to be dependable when it comes to providing translation notes aplenty.

Although my personal recommendation would probably be for people to wait and watch the anime series first, if you prefer to digest stories in manga form or are simply too impatient to wait until October the this first volume of Puella Magi Madoka Magica is a well-realised adaptation of an astoundingly good story that retains all of its early sense of fun and later emotional impact to make for a brilliant read that will leave you salivating for more.  Given what a great series it is, I'm more than happy to digest it across multiple media, and for both new and existing fans this manga adaptation looks set to be a glorious addition to any collection.

9
A brilliant work of story-telling, expertly adapted into manga form judging by this well-realised first volume.