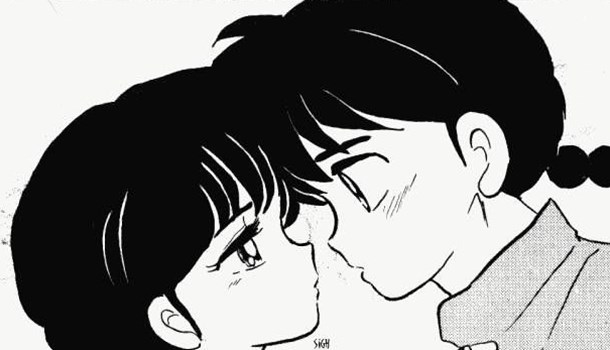 Since my purchase and obsession with the Ranma 1/2 manga, OAVs and TV series, I have heard some rather off-putting remarks about the series, it's intentions, and it's worthlessness. But, no matter how many bad things I hear about it, I can't help adoring this series.

It's a classic love polygon-with-unlimited-sides story, with the little twist of sex and species change with the aid of a bucket of water. The crux of the story is that martial arts student Ranma Saotome is cursed whilst on a tour of China with his father - after falling into a cursed spring, Ranma turns into a girl when doused with cold water, and back to a man when covered in warm water. His dad, Genma, is cursed into taking on the form of a giant Panda. As the series progresses, more lovers, challengers and general acquaintances show up, some cursed, and all after Ranma in one form or another...

It's very difficult not to find Ranma's wit and martial arts amusing, it's difficult not to find Akane's gift with inanimate objects becoming implements of destruction a little bit funny, or Kuno's Shakespearean quotes, or Ryoga's lack of direction, or Mousse's glasses, Ukyou's giant spatula, or ANY of the characters and situations the slightest bit amusing. Rumiko Takahashi's drawing style is very appealing, and there's never any confusion as to what's going on, who's saying what, or even who kicked who and where. It's just a perfect style for the characters and the plot.

In the end, Ranma 1/2 is just a wonderfully simple yet effective story, which, when read in moderation, is just what you need to escape angsty Gundam pilots and sailor suited soldiers. It doesn't even matter that the series is so long, just one book will give you the laughs you want each time you read it. It's that good.

8
It's easy to get hold of and is worth every page. No one can stop Ranma 1/2 being the great story it is.