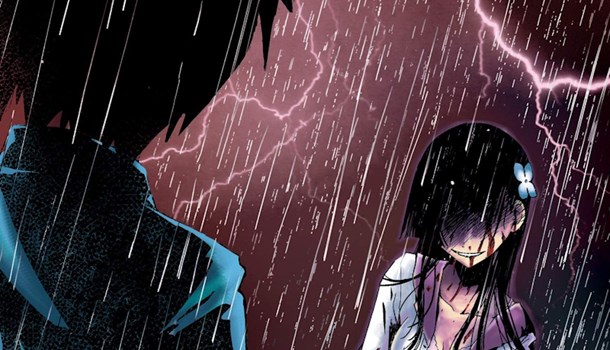 Chihiro has a zombie fetish. That's pretty weird. So obsessed is our "hero" that he fantasizes about comforting newly undead zombie girls, and has started to experiment with a formula to bring back the dead. In any other book he'd be the villain, but in context it's actually quite endearing, at least local heiress Sanka Rea thinks so, especially since her life isn't as perfect as it might appear.

You can see where this is going.

Sankarea is an odd manga. The characters are actually very well rounded, and while Chihiro can't really be viewed as anything other than odd at best, Sanka is actually a much more intricate and sympathetic character, and much of the manga's charm emanates from her.

The underlying themes of abuse, escape and suicidal tendencies are actually dealt with quite deftly, and it's not hard to see why the manga is getting such positive reviews from around the 'net. The series is actually deeper than the premise would suggest, and subsequently the book has a geat deal of humanity to it, which I certainly appreciated.

Sanka's home life is a desolate facadem, with strict, abusive parents who control her every action in a bid to ensure she reflects well on them at all times is presented in a way that's genuinely chilling. The fact that Sanka is a naturally kind and curious person who retains those traits in spite of her upbringing makes her character particularly endearing.

The artwork is never less than sharp, and there are some wonderfully atmospheric panels, though I am starting to feel that character design is becoming more generic in manga in general of late, and certainly Sankarea's characters would fit into most modern books without missing a beat. Still, the attention to form (especially on the girls) is reminiscent of Air Gear, and that's never a bad thing...

As is common in manga these days, there are a couple of "extras" thrown in - a word from the author on the development of the concept, delivered through Sanka, and a 4 koma strip complete the package.

Overall, Sankarea has a surprisingly strong start, and I can only hope that it continues to deal with the issues it raises rather than devolve into slapstick.

9
With a depth that belies its own premise, Sankarea is an excellent addition to any manga library.