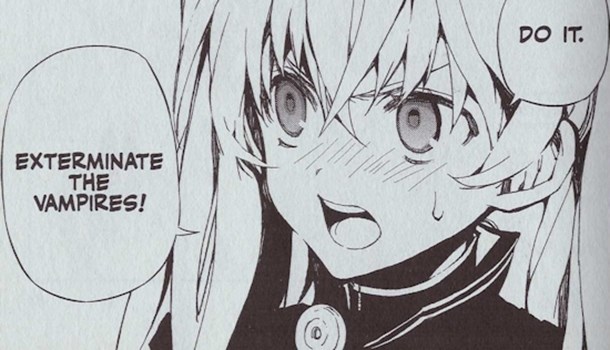 The enduring popularity of vampires knows no bounds in modern media, and anime and manga continue to employ some or all of the tropes you'd expect to see associated with them in various fantasy or supernatural settings. This can lead us to what we can only term "vampire fatigue" - a problem recently suffered by the slew of zombie fiction that flooded out into every medium - but can Seraph of the End manage to dodge those issues and offer something fresh and exciting? It's an important question, especially at a time when this original Shonen Jump manga is enjoying the first part of its animated adaptation streaming to the UK.

Set in the present day, things quickly take a rather horrific turn for humanity as almost its entire population is wiped out in an instant thanks to a mysterious virus. In the wake of the havoc this virus causes come a group of vampires, who round-up the surviving populace - made up solely of those under twelve years old, who are somehow immune to said virus - and put them to work as "livestock"; slaves only present to provide blood to their hosts. It's like being a perpetual blood donor in other words, but without a cup of tea and a biscuit afterwards.

Needless to say, this is a pretty ignominious way for humans to live, and there are fires of rebellion burning within some of the remaining children - not least Yuichiro Hyakuya, whose thirst for revenge against the vampires for subjugating his adopted "family" of fellow children from an orphanage knows no bounds. In comparison, his best friend Mikaela is rather more sanguine about the whole thing, although his easy-going attitude hides his own desire to search for a better future. Thus, an escape plan is formed, and as is traditional for a series of this nature goes horribly, horribly wrong, leaving Yuichiro to stumble alone into a big, wide world which is nothing like he'd been led to believe it might be.

Perhaps the most notable (and enjoyable) aspect of these first four volumes of Seraph of the End is how quickly they move forward - we start out with our protagonist and his friend looking to escape their existence as cattle for the reigning vampires, but before we know it we're thrown into a high school setting, and then equally quickly move beyond that and find ourselves on the brink of an all-out war by volume four. The cynical view is that this was the author's attempts to chop and change to find a formula that would curry favour with readers of the magazine within which the series was printed, but the seamless movement between these sometimes radically different settings makes the whole thing more compelling. This is helped by the fact that these major shifts are all sufficiently well-written so as not to feel forced, and are backed up by an enjoyable cast of characters.

Admittedly, none of these individuals are incredibly deep or well-rounded, but they all work well in their roles. Protagonist Yu takes the "angry youth" so typical of shounen manga and dials it up to eleven in a way that doesn't stop him being likeable (and actually turns into a source of comedy, be it deliberate or otherwise); the impatient Guren Ichinose pops in and out but makes his presence felt; and the show is constantly stolen by Shinoa Hiragi as both Yu's superior and a font of all knowledge designed to impart facts upon the viewer without too much boring exposition.

Add in a strong secondary cast (and not forgetting Mika, who only starts to come into the picture properly later in these volumes) and you have yourself a series that feels a little like Attack on Titan meets Blue Exorcist if you're into redundant comparisons to other manga - it's a series happy to rack up a body count and go down some dark paths like the former, but its style at times is more directly reminiscent of the latter. Lazy or not, these comparisons should help to give you an idea of the show's strengths - its story has no shortage of unplumbed depths surrounding Yu and indeed the wider state of the world, and its plot and characters have plenty going for them as long as you aren't entirely bored with the typical formula of modern shonen manga.

On top of all this, the series also has a pleasing visual style - character designs are all striking, and there are a surprising number of dashing uniforms on show, suggesting that the apocalyptic virus which wiped out the populace also didn't affect the fashion industry. These volumes make a pretty good fist of any action which comes to pass too - its battles aren't the best depictions we've seen on the printed page, but they're certainly effective enough and engaging in their own right.

Thus, the overall impression left by Seraph of the End is a good one - it's visually appealing, and its story moves at break-neck speed in a way which adds some real urgency to its story which matches its impatient protagonist. Some may be disappointed with the numerous shifts in setting across these early volumes, as it takes in quickly shifts away from scenarios that you might have been enjoying, but given that each setting has plenty to keep you hooked while also keeping the story fresh it's not something that we'd want to fault it for. Ultimately, this might not be the kind of series that can enter the annals of classic shonen manga, but it's still an entertaining read that has plenty going for it.

7
A fast-paced and varied tale with an enjoyable cast of characters and plenty of scope to delve deeper into its world, Seraph of the End is an enjoyable read thus far.