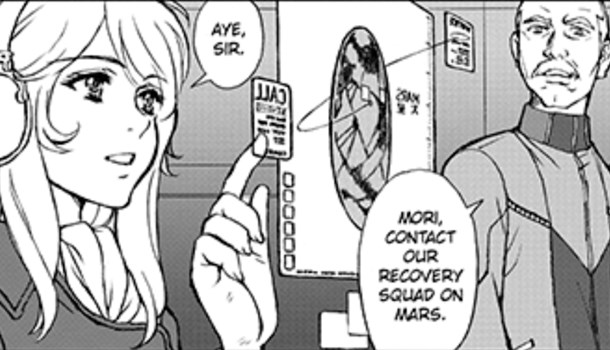 The Earth has been at war with the invading Gamilans, and it has not gone well. With the earth on the brink of extinction, it's oceans run dry, the world has one year left to live. The intervention of a third party, the Iscandar, provides humanity with one last hope - a new drive to bring humanity to Iscandar and recover the technology needed to heal our planet. With nothing to left to lose, a refitted Yamato Battleship must take to the stars and carry the last hopes of humanity with it.

This new manga adaptation of the classic Star Blazers anime series by Michio Murukawa was created in 2012, created to run alongside the redux version of the anime which was hitting Japanese theatres the same year. Recreating classic a tale with modern manga techniques is nothing new; Gundam Origins is doing great business following the same model, and reading the Star Blazers manga, you can see the sense of it.

Every panel is filled with detail, including comprehensive screen layouts only possible with computer generated images. The benefit is that the science of this Sci-Fi classic has really never looked better, and everything from ships to personnel, planets to gadgets, all look sharp and modern while staying true to the spirit of the original. There's plenty of tone used in the artwork to provide some real depth and heft to the page layouts, with some of the double-page layouts of the Yamato in orbit add a sense of scale to proceedings too.

Our hero, Kodai, lost his brother to the war, and now serves under the same Admiral who lost the battle that deprived him of his sibling. The majority of the crew are young and inexperienced since most of Earth's fleet has been destroyed, and the odds of success are disturbingly small.

One of the great things about the first book is the way in which the crew have to harness the Iscandar drive through a series of tests, not all of which go terribly well. There's a terrific sense of riding a wild horse as simply engaging the drive leads to near disaster, the crew reacting in different ways to the challenges that present themselves. Character moments are plentiful too, with the book smartly splitting it's large cast into manageable groups to allow the reader a greater sense of familiarity with the crew.

For those new to Japanese space operas, there are quite a few parallels to the recent Netflix Lost in Space series, so if you've been enjoying that show, this is a manga you that should thoroughly entertain.

These Omnibus editions contain 2 volumes of the manga, making it a good deal for the asking price. Coupled with plentiful extras such as Tim Eldred's comprehensive afterword, design concepts and production notes, this is a Yamato fan's dream manga, and a credit to Dark Horse for putting in the extra effort.

10
Epic in scope, beautiful in execution, Star Blazers 2199 is the perfect reintroduction for a giant of the Sci-Fi genre to a modern audience.