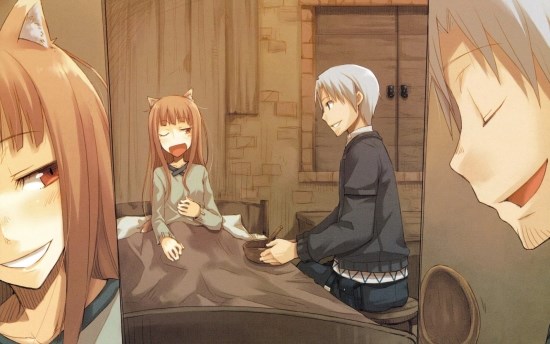 We've actually fallen a little behind with our coverage of Spice and Wolf's light novel releases - not so much out of a lack of love for Holo and her travels with merchant Kraft Lawrence, but rather because the prospect of this seventh volume in the series comprising of nothing but side-stories unrelated to the main thrust of the duo's travels was... well, a little off-putting, to be frank.

However, with volume eight now also available, we steeled ourselves for a hard slog and sat down with volume seven, subtitled Side Colours... and found ourselves to be pleasantly surprised.

Essentially, the book is split into three stories - one novella, and two genuine short stories. As a result, this novella takes up the lion's share of the book, and deservedly so given its interesting conceit, that being an opportunity to meet Holo before her encounter and travels with Lawrence. We make this meeting by following a pair of youngsters named Klass and Ayres, who find themselves forced into travelling having been cast out of the house that they previously called a home. Even before this rather odd pairing meet Holo, these two characters slot right into the world built by the series beautiful - Ayres is a true oddball, fascinated but confused by a world she's previously been entirely isolated from, while Klass is a brave young lad who is quite simply out of his depth. This dynamic drives the story forward, building up to Holo's introduction which adds an extra layer to proceedings without ruining that dynamic. If you ever wondered how Holo might hold up as a character when shorn of her relationship with Holo, now we have an answer, and that answer is that she's still a fantastically entertaining and engaging individual. But hey, she is a deity, so I suppose that should be a given.

If you're hungry for more verbal sparring between Kraft Lawrence and Holo however, fear not, as the remaining two short stories return to that main character dynamic for a pair of frivolous yet enjoyable stories which sees the pair doing some clothes shopping (trust me, it's more interesting than a trip to the local shopping centre), and Holo recovering from illness, both of which offer rare opportunities for Lawrence to prove his worth to his companion in the vain hope of reaching an even-footing with this wisewolf.

Even if you're hungry for the main story of the series to progress, all three of these tales go a long way towards showing what Isuna Hasekura does best - he's a master of creating characters and depicting their interactions with others, and this volume is a wonderful example of precisely that. Even when it introduces new characters who are irrelevant to the wider tale, this book is more than engaging enough to keep the reader's interest, and I found myself struggling to put it down in spite of its nature as a "mere" collection of side stories.

If the previous volume of Spice and Wolf disappointed somewhat, if nothing else this seventh instalment is a reminder of the kind of sparkling dialogue and characterisation that drew me to the series in the first place, providing evidence that those elements are still very much alive and well in the author's writing.

7
A surprisingly engaging and enjoyable collection of stories that bely their frivolous nature to provide something really rather enjoyable.