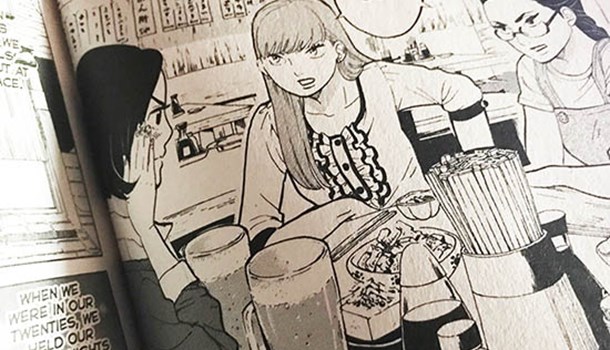 So, you’ve reached the grand old age of 33 and you still haven’t managed to snag yourself a husband – a complete and utter disaster if this tale is anything to go by! Tarareba Girls tells the story of three friends in their 30’s living in Tokyo, as they come to the realisation that they need to stop drowning their sorrows in their favourite bar and go in search of the man of their dreams – Tokyo’s answer to Sex in the City really!

This first story, centres round Rinko, a fairly successful script writer who sets herself the deadline of the 2020 Tokyo Olympics to find herself a husband. Ten years earlier she turned down a suiter for offering her an ugly ring, and now she’s starter to question whether she made the right decision. This means her head is full of a lot of ‘what’s ifs’. Weirdly these ‘what if’s’ manifest themselves as quirky characters in her daydreams, but merely serve to represent the frustration of hindsight. I found it a little annoying that the text reads as ‘what if, what if’ where it only really needs to say it once, an annoying niggle that is possibly just an issue with translation.

Rinko and her friends also find themselves a nemesis, in the form of Key – a young, blond, good looking model and aspiring actor. Key has no reservations about letting Rinko and friends know exactly what he thinks of their prattling on about finding the perfect man, making them feel somewhat ridiculous. He continues to pop up in the story to inconvenience Rinko, even jeopardising her career at one point, but he is a character you start to warm to and appreciate his candour.

This story hones in on the Japanese cultural norm that you are destined to be an ‘old maid’ if you aren’t married by 25. However, this is a perspective that has started to change over recent decades, as more women are gradually starting to leave it later to get married and have children, making it a perfect time for stories like this to examine this issue and test what is still relevant. Don’t get me wrong though, this isn’t a deep and meaningful tale or a romance (or at least not at this point), it is most definitely a comedy. The characters find themselves in awkward situations and you almost feel that the story is laughing at itself in its absurdity.

The artwork shows really defined characters which makes it easy to follow who’s who – something not all manga’s get right. Facial expressions and most of the other imagery is very good with nice skyline views of Tokyo included to set the scene. It wasn’t always easy to discern between speech and thought text and often there was a bit of both in scenes. This made the flow of the story a bit tricky to follow in some places, but this didn’t detract from the story too much.

My hope is that this story takes us to a point where these friends eventually realise that falling in love isn’t about finding perfect Price Charming (he doesn’t exist). I would be even more pleased if they come to understand that finding a husband isn’t the ‘be all and end all’, and if spending time together as friends drinking, partying or getting pampered is what they enjoy, then they should just carry on the way they are – who’s to say finding a husband will actually make them happy. The latter sentiment is actually expressed by the author in the bonus chapter in the back of the book, which shows that she has a very different perspective on relationships to the characters in the story. It was interesting to find out that she actually based the story on her friends and their quests to find husbands rather than her own experiences as you might expect. This is probably why the story feels so tongue-in-cheek – it is the authors way of trying to show her friends how ridiculous they sound when they are constantly going on about finding a man!

The story here is a little frustrating. I am a woman who was single on and off until the age of 34 and really don’t find this a true representation of what it’s like. At the same time, I appreciate that this is both representative of another culture and a tale told in a very extreme fashion. Taken for exactly what it is, it’s a thoroughly enjoyable easy read and I will happily read on to find out how the story progresses. This is possibly one for the girls but, boys, if you do check this one out please don’t judge our whole gender based on what you read!!!

7
A tongue-in-cheek look at life as a 30-something singleton in Tokyo, desperate to find a man!