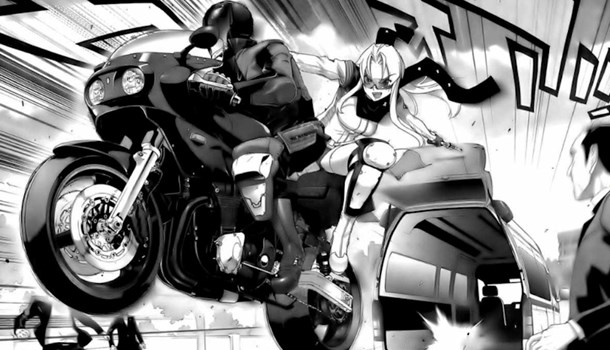 Reviewing on-going manga series can sometimes make it tricky to summon new insight - the previous two volumes of this manga, already reviewed here at UK Anime (see volume one here and Vthe second volume here), show a manga settling comfortably in a groove. If you're already invested in a series you know what to expect, but it is worth returning to show a new critical eye on a series when it does shift gears. Does Triage X roar on or spin out?

The Black Label Organisation has been working tirelessly to cure the sickening city of the criminal infection that runs rampant through its veins and streets - well, shooting a gun sets off a chemical reaction, so we can still call their vigilante executions "chemotherapy", anyway. Now, though, secondary infections are starting to take hold in an immunodeficient patient with an inadequate police service. Early samples of a new drug called "Platinum Lily", have reached Japan - highly addictive, and with side effects that make PCP look like camomile tea, its potential is devastating and if it starts being used widely it could herald anarchy. The Ampoule kill-teams have to act quickly to eradicate the distribution network before the main shipment makes landfall, cleansing the wound before septicaemia sets in. An ill patient is running a temperature, though, punctuated by the infernos created by the black-suited firebug dogging Arashi and Mikoto during their operations. Who is this mysterious figure, her burning trail causing her be diagnosed as "Fever" by Dr. Mochizuki, and should the Black Label Organisation welcome her aid? Is she really a fellow vigilante, or just clearing the decks for another player to take control?

The artwork of Triage X continues to maintain its reliable form, and there is little more to add than has already been said in the reviews of the previous volumes in this series. It capably supplies both ridiculous tits and realistic technologies (the architectural detail in these volumes is actually quite impressive), and each volume also begins with a large colour section.  Volume four does end with a very entertaining and in-depth extras section, as Sato takes us through his thoughts on designing the idiosyncratic weapons and equipment wielded by each member of the Black Label Organisation..

Where Triage X is starting to drag, though, is in its storyline. The Carry On-esque boob jokes work well enough (a scene where Oriha is amazed by genuine D-cups after encountering so much silicone in her entertainment career raises a snicker) and Mikoto admitting that she uses revolvers because of Dirty Harry is fitting for this pure actioner, but the drama is flagging. Inspector Tatara has become pretty much irrelevant, just book-ending each operation with a bit of commentary from the sidelines (he and the other police even spend the big battle of volume four unconscious from gas grenades). The focus of these two volumes moves away from Arashi to his comrade in Ampoule One, Mikoto, and whether she and Fever are really so different after all, but the manga's insistence that they are is where it falls completely apart. "Forced drama" is a hackneyed phrase, but it genuinely does apply here. To wit: Mikoto actually comes out and says to Fever, without a hint of irony, "Would someone who really cares about you order you to kill?"

Full disclosure: in these two volumes alone, Mikoto kills four people . Amongst diverse other kills racked up by her BLO comrades in these very same battles, Nurse Sayo literally rips the heart out of someone's chest.

I can see what Sato's doing. This sort of speech is the bread and butter of comic book heroes - "if we kill them, we're no better than them" and so on. It's a key chart datum that separates the goodies from the baddies. The problem is, though, is that whatever the formula may be you need to program the correct values into it to get the right result, and it simply doesn't work when you're all serial killers. Sato is given 2+2, but he rewrites it as 5+7.9 and seems astonished that it doesn't come out as 4 still. That this is given to us as the line that the BLO and Fever divide over betrays dismaying laziness from the author, tipping in a trope without stopping to think about whether it was appropriate to the story that he himself has created. It makes you worry that he's not committed to his own work, and whether we're going to see slapdash will-this-do blowoffs infiltrating future volumes of the manga. There is an attempt to rescue this disappointing direction by suggesting that Fever kills out of personal revenge while Mikoto kills for dispassionate justice, but this again is a hypocrisy when a big part of volume three is establishing Mikoto's guilt over the past of her yakuza family, and determination to destroy the usurper gang who initiated the civil war that destroyed it and helped create the divided city she's fighting in today.

Now, people will say that I'm making too much of this. Triage X is a simple manga of femmes and fightin' - I've said as much in previous reviews for the series - and so I shouldn't sweat the small stuff.  I disagree - if I was reading this just for the breasts and nothing else, rather than spending ten pounds on a manga I could do just as well spending two pounds on a copy of this week's Nuts. Even the tawdriest of outright hentai need some sort of setup to perk our interest with a hint of fantasy. I don't ask Triage X to be profound but I do expect it to at least be consistent, particularly when in previous volumes Arashi's certain commitment to BLO's extreme activities gave Triage X a lot of backbone. Mikoto does learn a lesson to live in the present, I suppose, but it doesn't wash away the bad taste of earlier scenes.

Talking about comic-book clichés, towards the end of the fourth volume the manga does develop the cojones to kill off two major characters, an impressive event of real drama... and then it promptly tips the kudos I gave it out all over the floor when in the next scene "their bodies were never identified". Sato, I hereby give notice - if you pull a 'back from the dead' stunt from the impossible end that you set them into in the manga, then you're getting a big fat zero for all future volumes.

These two volumes bring a long story arc to a close, ending on a note that we will be shifting focus to exploring the personal demons of other members of the Black Label Organisation. This makes me willing to keep on with Triage X - a change of topic will let it hopefully learn from these mistakes and give it another opportunity to recover. Altogether it still remains a competent action-adventure even though it flubbed its stunts here stopping a treatment course midway can cause a relapse, so until I'm convinced that the doctor's a quack, I'll continue to take his prescriptions.

6
The art continues to serve up the voluptuous and violent goods, but the charm is scuffed by some lazy writing.